A Fine State of Affairs

The Guess Who summed up rather accurately where we are today – a fine state of affairs indeed.  Everything seems to be in disorder – although not yet entropic.  What’s going on?  Let’s take a closer look.

In the US, the big deal last week was the scheduled Federal Reserve rate announcement on Wednesday.  Although markets had widely expected the Fed to stay put on rates (and he did), investors were still taken aback by the extremely dovish tone of the Fed’s remarks, and the further statements made by Fed boss Jay Powell in a subsequent press conference.  Our learned colleagues Dr. Long and Mr. Short cut through the verbiage and gleaned the following salient points:

Mr. Market had been pricing-in at least two rate hikes this year and next, so this is an abrupt change in view by the Fed.  Fixed-income markets rallied in response, with the benchmark 10-year Treasury bond leading the way, its yield dropping from 2.62% to 2.45% during the week.

As noted above, the Fed announced an end to the balance sheet roll-off, and bond traders – always a grumpy lot – were delighted.  In plain English, the Fed had been allowing maturing bonds in its portfolio to roll off; they would not be replaced with new bonds.  With an end to the roll-off, maturing bonds will now be replaced with new debt.  Which means the Fed will once again be bidding for bonds and bond traders marked up prices (and lowered yields) in response.  However, a steady fed funds rate and declining bond yields don’t exactly make the greenback more attractive.

The Fed had mentioned at length in earlier announcements its desire to move to a so-called ‘neutral’ rate.  It was evident the FOMC believed this optimal rate to be above current levels - but is it?  A paper authored some time back by Thomas Laubach (Fed Board of Governors) and John Williams (then-president of San Francisco Fed and now New York Fed president) provided a model for determining this neutral rate.  The graph below shows how the rate has been over- and undershot in past years but now may be at the desired level. 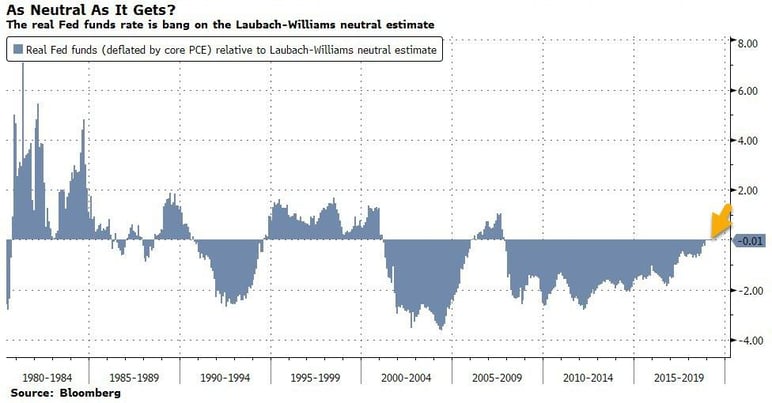 In Canada, February inflation emerged at +1.5% yr/yr (call +1.4%), continuing on the low side of the Bank of Canada’s CPI range, while January retail sales were quite soft.  Sales had been called +0.5% and ex-autos +0.1%; actual numbers were -0.3% and +0.1%, so the overall pace of sales was weak.  Regardless, the major news of the week was the new federal budget tabled by the Liberal Party.  Generally, market players don’t pay a lot of attention to these announcements, but in this case, with an election looming in October and the government being buffeted by apparent scandal, we all took a closer look.  Not surprisingly, there was little in the way of corporate tax relief or even any acknowledgement of this issue.  Tax levels in Canada are comparatively high and influencing competitiveness, but this budget did not address it.  Many benefits and tax breaks were made to targeted groups, but there was little attempt to bring rising deficits under control or even acknowledge that deficits are an issue.  Fitch Ratings of the UK expressed concern over the Canadian government’s deteriorating balance sheet.

Canada is currently rated Triple A, the highest (and most prestigious) rating and that is not currently in jeopardy. Still, Fitch expressed concern over the total amount of debt issued both federally and provincially. As a result, Mr. Market didn’t hesitate to sell off the loonie.

In the UK, BREXIT continued to drag on with the March 29th deadline for a ‘Hard’ BREXIT (no deal) looming ever larger.  City players paid scant heed to the Bank of England’s rate announcement and its concerns over BREXIT. In a unanimous vote, the Monetary Policy Committee voted to leave rates unchanged – so now it’s up to the politicians.

Sterling had been lagging most of the week but picked up some ground at the close.  Still, along with CAD, it was the loser on the week. This coming Friday may be rather interesting!

So many loose ends out there – the unresolved US-China trade talks; the looming US trade crackdown on the EU; a possible  (even likely) ‘Hard’ BREXIT; a rapidly slowing global economy; this does not look good.  Not good at all.

The coming week sees a handful of Canadian statistics, with January GDP the most noteworthy, while America sees some secondary numbers along with a deluge of Fedspeak.