This stereotypical Canadian phrase, which was made famous by the fictional Canadian brothers Bob and Doug McKenzie of SCTV fame, is the perfect description of what happened to the CAD last week, as it surged to a two-year high on the back of Canada’s best first-half of economic growth in 15 years.  The Canadian economy powered ahead at a 4.5% clip in Q2, tops among the G7, and led by the biggest binge in household spending since before the 2008-2009 global recession.  The 4.5% annualized growth and 4.3% year-over-year was the fastest in six years and topped the 3.7% average forecast from economists.  If Canada can maintain a 3% growth rate for the remainder of the year, it would end a five-year stretch of sub-3% growth and it would also be a full percentage point of growth faster than the U.S.

Canada is benefiting from a confluence of developments that include the bottoming of the oil shock, a synchronized global recovery, and a shot of federal deficit spending.  Having said this, the housing market remains a concern.  Recent policies to rein in excesses in the housing market are taking their toll in the Toronto market.  In Vancouver, similar policies that were enacted a year ahead of Toronto seem to be wearing off, which could be a harbinger of what is to come in the Toronto housing market in a year’s time.  Let’s hope that the recent binge in household spending wasn’t due to expansion of residential housing-backed credit lines. 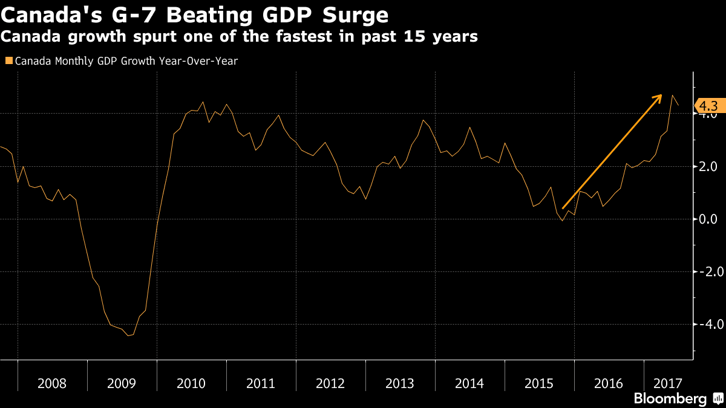 These eye-popping numbers have reinforced the notion that the Bank of Canada will continue raising interest rates this year and have increased the chances that the BOC will hike as soon as this Wednesday’s policy meeting rather than wait for October.  The odds of a hike this week have jumped to 41% from 27% before the report was released.  Furthermore, Mr. Market has also taken the liberty of pricing in at least one more rate hike in 2018. 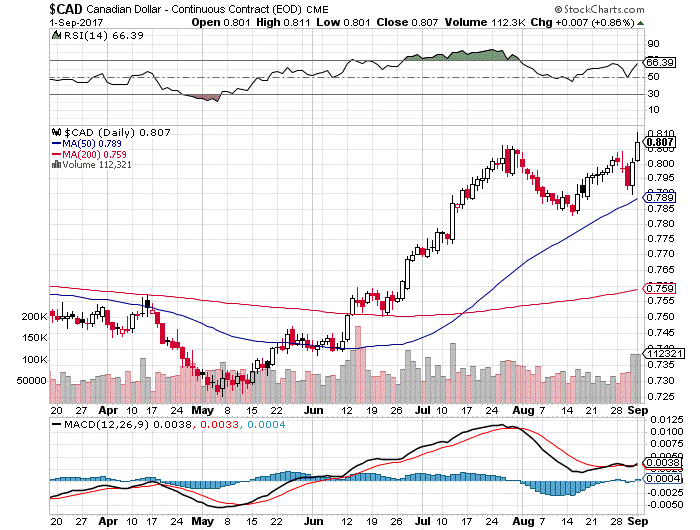 If the BOC decides to not raise rates this week, then the CAD may sell off initially and present a great buying opportunity since investors will quickly realize that a hike will be forthcoming.  If the BOC does indeed deliver a rate hike on Wednesday then the reaction could go two ways.  Firstly, the CAD could sell off on the buy the rumour and sell the fact operandi – keep in mind Governor Poloz’s June assertion that he intended to take back the insurance cuts of 2015. Secondly, the CAD could move higher on the assumption that the BOC will continue to hike rates.  Unfortunately, Wednesday policy meeting will not be followed by a press conference or a Monetary Policy Review which will only serve to cloud the BOC’s future intentions – thus, increasing the probability of the CAD selling off regardless of what the central bank does.

Meanwhile, the NZD was the worst performer of this past week as the Reserve Bank Governor tried talking it down yet again.  Governor Graeme Wheeler said that a lower NZD was needed to increase import inflation and help deliver more balanced growth.  These remarks come after his early August remarks that active intervention in the currency remained an option for the central bank.

As for the USD, it managed to finish last week in the middle of the pack but unfortunately it isn’t out of woods just yet.  Thanks to Hurricane Harvey, the loss of economic activity due to the storm will hit Q3 growth and cloud the picture on growth and inflation for months. One would assume that this will make the Fed less likely to hike in December.  Ironically, the devastation caused by Harvey may well have reduced the chances of a government shutdown and may make it easier to raise the debt ceiling, at least for a short time

The US dollar index is showing a possible broadening top forming, which if broken, will cause the index to sustain a major downfall.  Having said that, some of the momentum indicators that we follow, are showing signs of a turnaround in the next couple of weeks.

Friday’s US payroll data didn’t help the USD as it rang up a triple negative – only 156K jobs versus an expectation for 180K, earnings were 0.1% versus a forecast of 0.2%, and the unemployment rate ticked up to 4.4% from last month’s 4.3%.  Fortunately for the USD, its downdraft was reversed after news broke that the ECB may not decide on its balance sheet taper until December.  This would be a surprise, if true, especially since many had expected an announcement at this week’s ECB meeting.

Additionally, at the time of this writing, North Korea said it had tested a hydrogen bomb, capable of being mounted on a ballistic missile, that was a “perfect success”. The test, estimated to have been about 10 times more powerful than previous detonations, triggered a magnitude 6.3 earthquake.

In a tweet, President Trump said the US is considering, in addition to other options, stopping all trade with any country doing business with North Korea. That brings a trade war with China into the crosshairs as China is North Korea’s biggest trading partner.  This comes on top of the possible trade tariffs that Trump is already seeking from his administration.  Protectionist trade policies are negative for the USD.