The USD has been unloved for more than a year now – on Valentine’s Day we were reminded on how “unloved” it really is.  The dollar plunged as US inflation data surprised to the upside while retail sales disappointed.  The Consumer Price Index increased 0.5% last month. That was higher than estimates for a 0.3% increase and the 0.2% in December. The year-on-year increase in the CPI was unchanged at 2.1%.  Meanwhile, the “core” CPI, excluding the volatile food and energy components, rose 0.3%, the largest increase since January 2017.  However, the year-on-year rise in the core CPI was unchanged at 1.8% in January.  The USD shot higher across the board but quickly reversed and sold off on the retail sales report.  Mr. Market was expecting a gain of 0.2%, instead retail sales fell 0.3% in January, recording their biggest drop in nearly a year.  The decline was broad based across retail categories, with half the categories showing declines.  Making matters worse, the strong sales increase of 0.4% that was reported for December last month was completely revised down to zero. 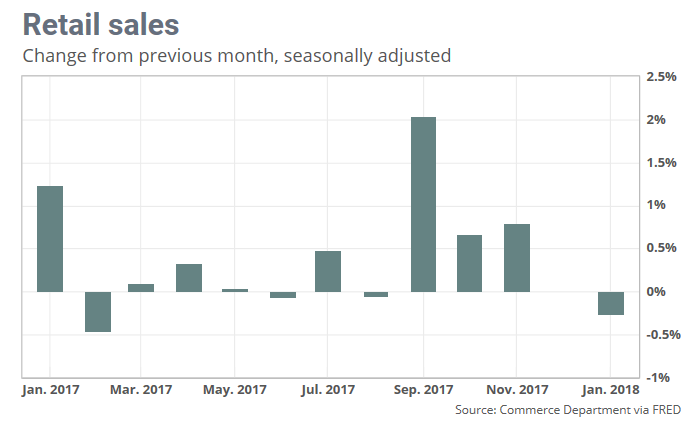 Rising inflation and waning consumer demand, aka stagflation, isn’t the scenario that policymakers at the Fed were hoping for.  In this case, you would expect the Fed to pause rate hikes until demand strengthened – but there’s a problem with that conclusion.  There’s a new Fed Chairmen in town, and he must, like all the previous Chairs before him, establish his inflation fighting credentials.  Thus, don’t bet against a Fed rate hike in March, even Mr. Market gives it a 100% certainty.

So with the market pricing in a 100% chance of a rate hike at its March meeting, why isn’t the USD going up, up, and away.  Conventional wisdom is that higher yields (interest rates) would boost the dollar, but that’s not happening.  There may be two reasons why conventional correlations are breaking down.

Secondly, USD weakness is the prospect of US fiscal sustainability.  Remember the Fed is on a pre-set course of quantitative tightening, which means that it will not roll over $420 bln Treasuries this year.  At the same time, it is estimated that the Treasury Department will issue over $1.4 trillion in bonds, nearly three times higher than last year’s issuance.  Moreover, tax reform is going to reduce tax revenue at a time that the Trump administration is focused on more spending with an infrastructure plan and higher military spending.  White House projections of nearly $1 trillion deficit next year may prove to be optimistic.  With the Fed buying less debt and Washington’s plans of issuing more debt is beginning to worry the bond market – “this time is different”, we’ll soon see. 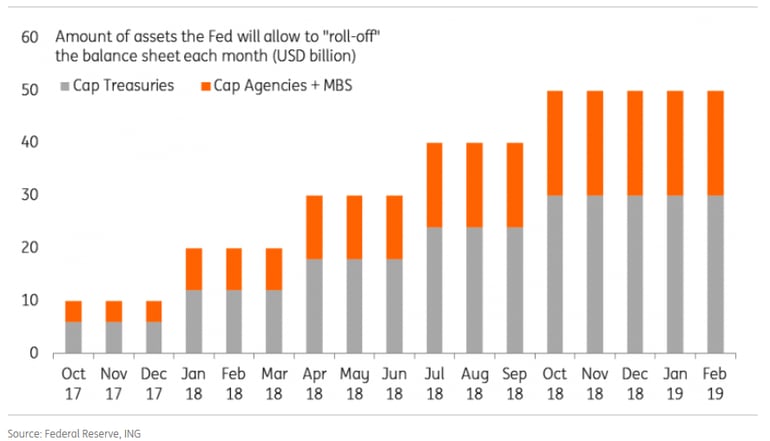 Getting back to the dollar index, we highlighted two weeks ago that the index had managed to halt its seven week slide and that in a prior multi week slide, at the end of 2016, the index managed a shallow rally of 4 short weeks before resuming its decline.  Fast forward to today, the index is back down on the week as it was only able to eke out a meager two week rally before turning down again.  Should we now expect another multi-week decline?  Friday’s price action may give us pause.  Look at the turnaround on the performance chart, the dollar did make a dramatic recovery ahead of the long weekend.  Furthermore, Friday’s price action formed a bullish outside reversal while the technical indicators supported the move. 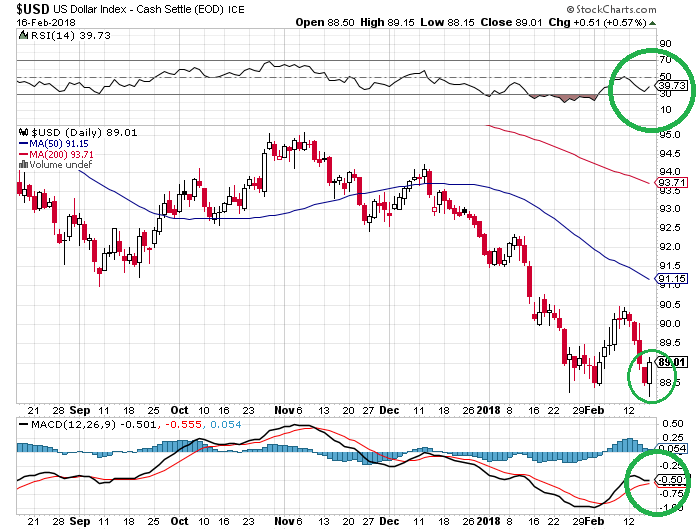 Before we call a reversal, keep in mind that the price action did come on a Friday and ahead of a long weekend so caution is warranted.  Also, let’s not lose sight of the long term, which remains bearish on the weekly chart of the dollar index.  Time will tell if the budget deficit will continue to trump higher interest rates.