When Russian scientist Ivan Pavlov conducted his famous research on the behaviour of dogs, he found that not only did his canine subjects salivate when presented with food, they also commenced salivating upon hearing the approaching footsteps of Pavlov’s assistant. They had learnt to associate the footsteps with oncoming food – hence, salivation.  ‘Conditioning’ is the generally accepted term for this phenomenon.

In like fashion, global capital markets rallied sharply last week. Not on settlement of the ongoing US-China trade war, nor even the beginning of another round of talks between the two combatants, but on the mere announcement that high-level talks would re-commence in early October in Washington. Nothing more specific than that, but Mr. Market responded with a cry of risk-on. Talk about conditioning! There were also some key statistics, a Bank of Canada rate announcement, and a goodly amount of Fedspeak.  Let’s take a closer look, shall we?

We begin with Canada, as the BOC is bucking the dovish trend evinced by virtually all other central banks. The bank held their overnight rate steady at 1.75% last Wednesday, as was widely expected, but the accompanying statement had a surprisingly less-than-dovish tone. Our learned colleagues Dr. Long and Mr. Short waded through the verbiage and distilled these salient points:

The BOC summarised by noting that, while ongoing trade disputes have the potential to markedly hurt domestic growth, still the strength in the domestic economy and continued growth stateside means the current level of rates (‘monetary stimulus’) remains, in its view, appropriate.

Last Friday saw the release of Canadian August jobless numbers, and once again it surprised on the upside. Analysts had predicted a rate of 5.7% with job growth of +10K; in the event the rate matched the street’s call while the total number of jobs created was an astonishing +81.1K, with full-time jobs rising +23.8K and part-time jobs rising +57.3K. We suspect the latter is mostly students and others obtaining part-time work in retail in advance of the Christmas shopping season.

Bottom Line: With the BOC holding firm on rates while other central banks, most notably the Fed and European Central Bank, are falling over themselves to cut administered rates, the loonie may be set to strengthen going forward.  The only possible cloud on the horizon is further escalation in global trade tensions negatively impacting Canadian exporters already hampered by a strengthening currency.

In the US, the all-important jobs numbers for August were released last Friday. The ADP report from last Thursday, showing a rise of +195K jobs vs the call of +150K, encouraged players to ramp up their guesses for the payroll number and position themselves accordingly. As it turned out, investors were disappointed by rather soft numbers: +130K jobs vs the call of +175K, while the jobless rate held steady, as expected, at 3.7%. On the plus side, average hourly earnings rose a solid +0.4% beating the call of +0.3%, and hours worked rose to 34.4 from the previous 34.3 as expected.

Earlier in the week, the ISM Manufacturing Index dipped below the expansion/contraction line of 50, emerging at 49.1, well below the call of 51.2 and the first time below 50 in several years.  Along with a steady stream of dovish Fedspeak, including a speech in Switzerland by Fed boss Jay Powell revealing no change in Fed outlook, market players took the weak ISM and Friday’s so-so jobs numbers as a green light for the Fed to continue cutting rates. A quarter-point cut looks set for the next meeting Sept. 17/18. In the meantime, given the bullish view of most market participants, the greenback will likely continue to weaken as, indeed, it was the loser on the week, outdone only by the JPY. In other words: risk-on.

This week sees a rate announcement from the ECB; it is widely expected to cut rates again, and possibly announce details of further QE (Quantitative Easing). Incoming ECB chief Christine Lagarde is fully supportive of further easing and claims the drawbacks of negative interest rates are more than offset by its benefits. However, several Eurozone banks have criticized the ECB’s obsession with ‘monetary stimulus’ and differ strongly with the ECB about negative interest rates. For one thing, it isn’t very good for their respective share prices: 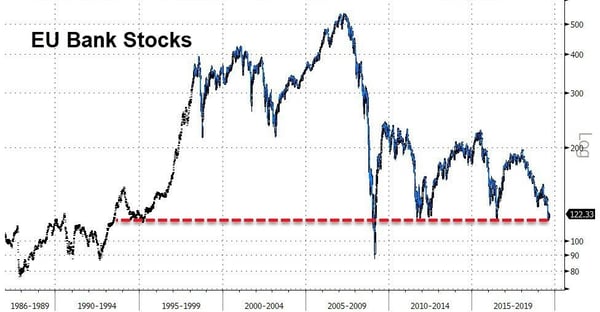 As the above chart demonstrates, the EU Bank index is being supported by a trend line dating back almost 25 years! It has held several times in recent years, even during the Panic of 2008 when it looked like it might break (but did not). Several of these banks expressed concern that the ECB has little in the way of ‘ammo’ to deal with a future large-scale recession, having already printed as much as it dares while, on balance, showing little benefit. As a result, the ‘japanification’ of the Eurozone, complete with slow growth, low inflation, negative interest rates, and futile central bank ‘stimulus’ appears to be almost complete. May we suggest that perhaps a new approach is warranted? (This isn’t the first time we’ve said this).

Further impetus for risk-on was provided by the Italians once again fashioning a coalition government – the umpteenth of the post-war period – after an extended period of political disharmony in Rome. Additionally, the apparent rebuff of UK PM Boris Johnson’s aggressive plan for a hard BREXIT encouraged traders to place bullish bets. This latter issue is far from resolved, but the clock is ticking on the October 31st deadline, and Bojo may still have some tricks up his sleeve. We await further developments.

The coming week sees little of note on the Canadian economic calendar, while America sees a slew of second-tier statistics including August Retail Sales. No Fedspeak is currently scheduled.