Rising US bond yields, rising oil prices, and a rising USD were the three biggest stories of the week. As you can see from the weekly relative performance chart, the USD was up big across the board with the big losers being the NZD and GBP. The USD was driven higher thanks to a rise in the US 10-year bond yield which, after breaking above the key psychologically level of 3%, could now fuel a further advance. The 10-year bond yield has risen steadily this year, from a low of 2.4%, due to an increase in the supply of bonds (from the Federal Reserve from the unwinding of its balance sheet and from the US Treasury issuance) and as markets continue to flirt with the idea that the Federal Reserve could look to increase the pace at which it raises interest rates in the months ahead.

The CAD was the second best performer, only losing half a percent against the USD which means that it outperform on its crosses, especially against its most popular one, the EUR/CAD. Rising oil prices, rising Canadian bond yield spreads, and the prospect of a NAFTA deal have limited the slide in the CAD. Canada’s Foreign Affairs Minister, Chrystia Freeland, has decided to skip an important diplomatic trip to Brussels to stay in Washington as NAFTA talks intensify. There is a big push to hammer out a deal by Tuesday. That’s when U.S. steel and aluminum tariffs -- which Canada is exempt from -- take effect.

Believe it or not, but crude oil has surged to a 40-month high. Keep in mind that the rise off the lows has not been driven by demand but rather it has been achieved a restriction of supply. Saudi Arabia and Russia are now signalling that they aim to extend the cuts deep into 2019. The rise since mid-2017 is squarely the result of rising geopolitical tensions. The lessening of tensions in North Korea has been replaced by Syrian civil war and the proxy-war between Saudi Arabia and Iran over Yemen. But wait, President Trump is about to kick tensions into a higher gear by reinstating oil sanctions against Iran but you wouldn’t know his latest tweet on oil.

News that the US 10-year bond yield hit 3% for the first time since 2014 received a lot of air play and ink from the media last week. A lot of the coverage revolved around the angst of what this milestone means to the markets. In short, the yield is up due to expectations of higher inflation to come. To equity markets, this rise in yields can spell trouble for stocks. With stocks close to fair value and in some cases overvalued, a 3% yield on a 10-year bond is real competition to stocks that barely pay 3% dividends. My take, is 3% really that high? It really isn’t, it just seems like it is - it actually use to be quite normal. It just seems high because central bankers have keeps interest rates artificially too low for way too long. Low rates were necessary in the early days of the financial crisis but not nine years into a business cycle expansion. Enough already, let’s get interest rates back to normal so that proper living and investment decision can be made.

The rise in bond yields has finally attracted money flows to the USD and for now are trumping concerns over US protectionism and the US budget. This has caused the euro to finally break below its four-month old sideways range.

The US dollar index has been on a great run lately, rising steadily since mid-April, however the momentum indicators are warning of a correction. 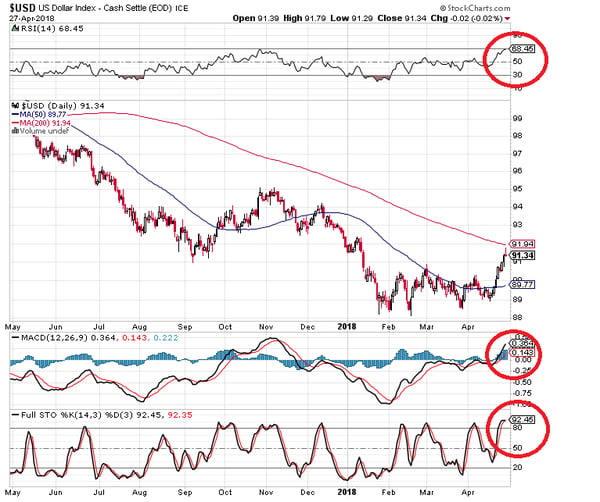 Next week the Fed takes center stage with its policy announcement. No hike is expected but they could lay the ground work for a hike at the June meeting. This is in stark contrast to the central banks of Japan and the ECB, which both held meetings last week. Both banks demonstrated that they are still not ready to board the path to policy normalization. The BOJ dropped its effort to predict when inflation would hit its 2% target, implying that it is in favour of more stimulus, what a surprise! Meanwhile, the ECB continues to be cautious - ECB President Mario Draghi stated that he was reluctant to discuss the future path of policy during the meeting. This statement alone helped the euro to break below its 4-month trading range.