Five events captured the market’s attention last week:  a speech by the Deputy Governor of the Reserve Bank of Australia, the European Central Bank policy meeting, the minutes of the March FOMC meeting, more of the Brexit saga, and another trade war.

First, the title of “King Dollar” went to the Australian dollar last week as it popped nearly 1% on the week on a speech by the RBA Deputy Governor Guy Debelle.  The speech was titled “The State of the Economy” and fittingly was given at the American Chamber of Commerce in Australia.  Mr. Market perceived the speech to be less dovish than anticipated, which is why the currency reacted the way it did.  His upbeat comments on the economy cooled RBA rate cut bets, especially after hinting that the central bank is still in a wait-and-see mode for interest rates.  One particular comment that caught my eye was Debelle stated that "the strength of the labour market is at odds with the slow pace of GDP growth".  This conundrum between strong jobs growth and weak economic growth is also being experienced in the Canadian economy.  Don’t you love it when uncooperative economic data doesn’t fit nicely into an economist’s neat perfect models?

TThe week didn’t get into high gear until Wednesday, that’s when the central banks of Europe and America were in the spotlight.  At an ECB policy meeting, ECB President Mario Draghi struck an optimistic tone as he highlighted the potential for inflation to decline in the near term while emphasizing the ongoing need for monetary stimulus.  He signaled that the ECB’s bank loan tool (TLTRO) would be the first line of defense in an economic slowdown.  He also said the ECB is “ready to use all its instruments … all instruments” if needed.  This line brought back memories of Draghi’s “aha” moment of July 2012 when he stated he was ready to do “whatever it takes” to save the euro in the middle of the European Sovereign debt crisis.  Ironically, he will be the first ECB president to finish his 8-year mandate without ever raising interest rates.  Draghi’s remarks caused the euro to quickly shed 50 pips before recovering back to trade higher on the day again. 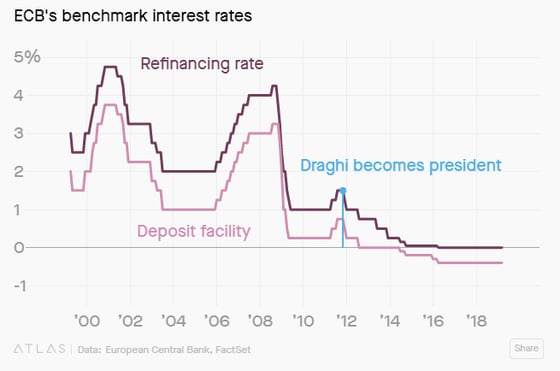 Meanwhile, later that same day, the minutes from the March Federal Reserve meeting revealed that most policymakers see rates on hold through 2019 amidst uncertainty over trade and Brexit.  It’s worth noting that the Fed is still open to the idea of a potential rate hike toward the end of the year if economic data improves.  This suggests that the minutes may have been colorful; however, the prospect of an actual rate hike has been almost completely priced out.  The very next day, Fed President Bullard reinforced the market’s view by suggesting that the March hike marked the end of policy normalization and favors removing the word “patient” from the policy statement because it suggests a tightening bias.

The monthly charts below are of the US dollar index and the euro.  Both charts have been forming a head and shoulder pattern since March 2015. The dollar Index is in a head and shoulders bearish topping pattern while the euro is in a head and shoulders bullish bottoming pattern.  It important to keep in mind that these patterns are everywhere one wants to see them, and they simply imply that a technical pattern is in the process of forming. This doesn’t necessarily mean that they will, in fact, form; we all know anything can happen.  Nevertheless, it’s important to keep them in the back of your mind.

Two weeks ago, when describing the roller coaster known as Brexit, I said:  “Shakespeare himself couldn't have dreamed up such a hopeless tragedy”.  I was mistaken; instead of Shakespeare, I should have said Stephen King, considering the EU has granted the UK yet another extension (this time until Halloween of this year).  Consequently, as you can see from the weekly performance chart, the GBP aptly yawned at the news.  The price action in sterling echoes that famous quote by the German philosopher Friedrich Nietzsche, “That which does not kill us, makes us stronger.”  The currency is carving out an ascending triangle pattern and is seen as a continuation pattern in its current bullish uptrend.

If you believe the headlines, the trade talks between the US and China are going swimmingly.  All indications are that the talks will conclude by the end of Q2.  With the finish line in sight, news broke of yet another trade war: Trade War 2.0 between the US and Europe.  That’s right folks… Tariff Man rides again! President Trump has threatened Europe with $11B in tariffs on European goods over Airbus subsidies.  This should come as no surprise, since Trump has already threatened Europe with 25% tariffs on auto imports over the last year.  Europe is preparing its own list of retaliatory tariffs worth $22B over Boeing subsidies.  It’s important to note that the World Trade Organization hasn’t officially recommended a penalty for the EU.  This warning shot by Tariff Man is a sign that challenging trade talks lie ahead for Europe and Japan, as bilateral trade talks between the US and Japan formally begin in Washington next week. 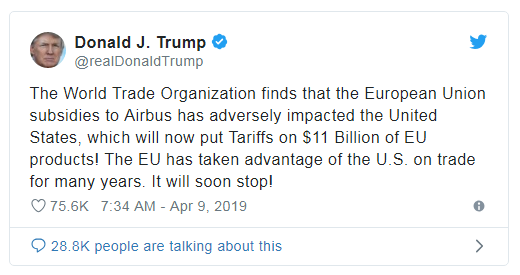 Next week will be a short week with the markets closed for Good Friday.  A key data point for Europe will be the flash PMIs, which may show that growth is modest but improving, and may bode well for the euro.   Likewise, in the US, a number of reports (retail sales, manufacturing PMI, industrial production, and leading indicators) may suggest that the slowdown may be almost over.