In recent weeks it had become evident that the global economy had entered a ‘soft patch’. As detailed last week (End of the Line?) and in earlier dispatches, global manufacturing had seen significant drops in Europe, Asia, and North America, leading to speculation of further rate cuts by central banks and possibly further quantitative easing.

That was the backdrop of late. However, Canada’s September jobless statistics surprised, trending sharply to the upside following equally strong numbers in August. What’s going on in the True North? Let’s take a look.

The positive unemployment numbers were not the only data releases of note last week in the Great White North. Net jobs also rose an astonishing +53.7K vs the call of +10K after a strong gain of +81.1K in August. The rate declined to 5.5%, below the call of 5.8%, and beating last month’s 5.7%. Full-time jobs saw an increase of +70K, indicating losses in part-time jobs (always a good sign). Wages rose a strong +4.3% from the prior month’s +3.8%.

Not surprisingly, Mr. Market liked the news with the CAD gaining nearly 3/4ths of a cent against the greenback as investors rushed to buy the loonie.  However, given general global weakness in trade and manufacturing, a reasonable question is: where are all these jobs, and why are wages rising so strongly? The US has seen soft jobs numbers in recent months and global trade is in the doldrums generally, which usually has a strong impact on Canada. A cynic might argue that the Canadian federal election being only a week away on October 21st may have factored in. We aren’t that cynical, but we are a touch sceptical of such stellar numbers given a soft global economic milieu. Regardless, we’ll take them cautiously and drive on.

As regards Fedspeak, in a give-and-take session last Tuesday, Fed boss Jay Powell talked a lot but said little, as central bankers are wont to do. But one little nugget emerged from the verbiage – the Fed may be commencing QE4 very soon. However, Mr. Powell went to considerable lengths not to call it QE4. Instead, he talked about the recent funding difficulties faced by banks and dealers in obtaining overnight financing for their bond inventories, and that bank reserve requirements would have to be examined in light of this.  Regardless, market players see a fourth round of quantitative easing commencing soon. The graph below shows projected Fed purchases (Open Market Operations – OMO) along with rollover of maturing treasury and mortgage-backed (MBS) debt. 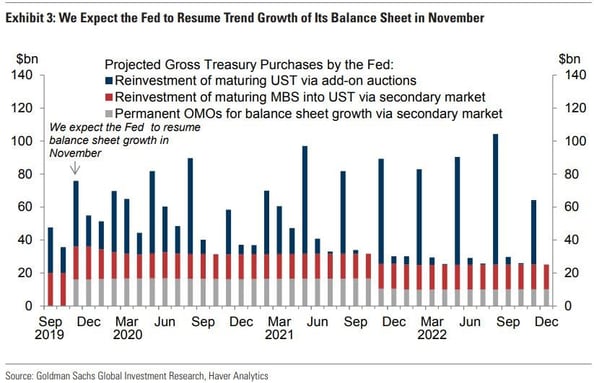 What does this imply for the greenback? In a word - weakness. QE4, through steady purchases of bonds all along the curve, would cause a general decline in bond yields and decreased USD attractiveness. Recall that nearly 25% of all sovereign debt has a negative yield, with US treasurys being one of the most liquid and obtainable bonds, and much in demand by investors seeking a positive yield. Reduced appeal of these bonds would cause global players to shift their attention elsewhere, and the greenback may suffer.

Continuing with the Fed – minutes of the Sept 18th FOMC meeting were released last Wednesday, revealing a Fed more divided in outlook than had previously been thought, with a hawkish bias. Participants were concerned that market players wanted more rate cuts while the Fed feels that the current level of rates is appropriate for the economy at present. Some members wanted a pushback against market expectations, while others desired clarity in future statements about the ending of policy accommodation. These are hawkish sentiments, but the members espousing them do not constitute a majority; at least, not yet.

There were other topics on the agenda, such as a review of bank reserve requirements and the impact of low interest rates overseas, but the hawkishness exhibited is the major takeaway.

Returning to the topic of economic weakness: one of our favourite metrics of manufacturing is the weekly railcar loadings published by the Association of American Railroads (AAR). An obscure measure, no question, given railways’ near-invisibility in the modern era, but a telling statistic as railways have enormous exposure to North American industry. Oil, coal, chemicals, minerals, grain, automobiles, intermodal, raw materials in, finished materials out – railways carry it all. So, any sort of softness in heavy industry will promptly show up in car loadings. The AAR recently reported a three-year low in volumes, down 5.5% in Q3 of 2019 – see chart below. 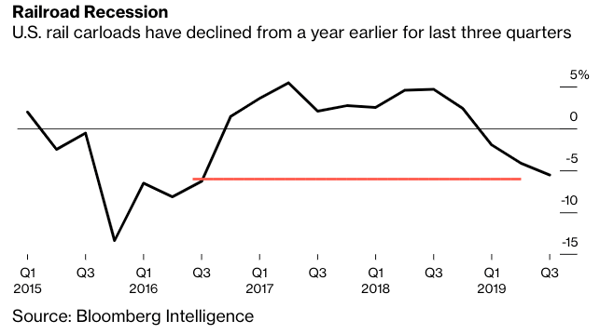 Analysts blame, not surprisingly, the Sino-US trade dispute as the culprit, and point out that the manufacturing recession has been ongoing for a year now, driven down by soft capital spending. An upturn doesn’t appear to be in the cards yet.

GBP was the winner on the week, following news that negotiations between the EU and the UK would, as it was termed, ‘intensify’. A summit of European leaders this coming Thursday may be the last opportunity to cobble together a deal before the deadline of October 31st. Expectations are low but, perhaps, they’ll get it done.

The coming week sees only inflation numbers in Canada, while America has a full slate of secondary numbers including Retail Sales along with a plethora of Fedspeak.