We were all set to write about the ‘least ugly pig’ contest currently playing out in the markets, with the relatively unattractive USD rallying as other currencies appeared more unattractive, so to speak.  That was until we saw the blowout Canadian payroll numbers for January, so we’ll begin our review of the past week up in the Great White North.

Our learned colleagues Dr. Long and Mr. Short analysed the numbers and came up with the following salient points:

Our colleagues expressed some surprise at the strength of these numbers, citing ongoing concerns about the economy which have been well-covered in this blog.  The average jobs growth over the past five months stands at +46.7K, which equates to roughly a half-million non-farm payroll jobs created monthly in America. That is a number not seen, we believe, since late in the second Clinton administration.
According to STATSCAN, most of the hiring (53K) was in the 15-24 age bracket which, while positive, leads our colleagues to think that this may be a seasonal skew.  Regardless, Mr. Market liked the news and bought anything with a maple leaf on it.
In the Land of the Free, traders fretted over further delays to a planned meeting between President Donald Trump and Chinese leader Xi Jinpeng.  The Chinese trade tariff deadline is March 1st and it appears no meeting will take place prior to then – although there have been some rumours of the deadline being extended.   Aside from that, there was little to report.  The SOTU speech given by Mr. Trump has been well-analysed already and there was little of note in Fed chair Jerome Powell’s speech last Wednesday evening.  Given an absence of hard news and also given that other currencies appeared unattractive, players then loaded up on greenbacks.

This is not good

Creating more headaches for the EC – and putting further selling pressure on the EURO – is the ongoing feud between France and Italy.  French president Emmanuel Macron is a committed globalist and has been contending with the yellow jacket restiveness in France.  Populist Italian deputy PM Luigi di Maio recently met with leaders of the aforementioned yellow jackets and made clear his support, infuriating the French who recalled their ambassador to Italy.  This after the Italians had recalled their ambassador to France in an earlier row over immigration, yet another unresolved EU issue.  All of this might be entertaining, and certainly for students of history it is, but Italy owes a lot of money, and a good chunk of it – 425 bln EUR – to lenders outside Italy.  The precarious state of the Italian banking system has been well-documented in this blog previously.  Now it turns out that a considerable portion of this outside debt is being held by French banks, none of whom must be pleased by this ongoing diplomatic to-do.  Italexit, possible Italian default, Italy throwing off the EURO, other nations possibly following suit – this is not a good situation.  The EURO did not have a good week. 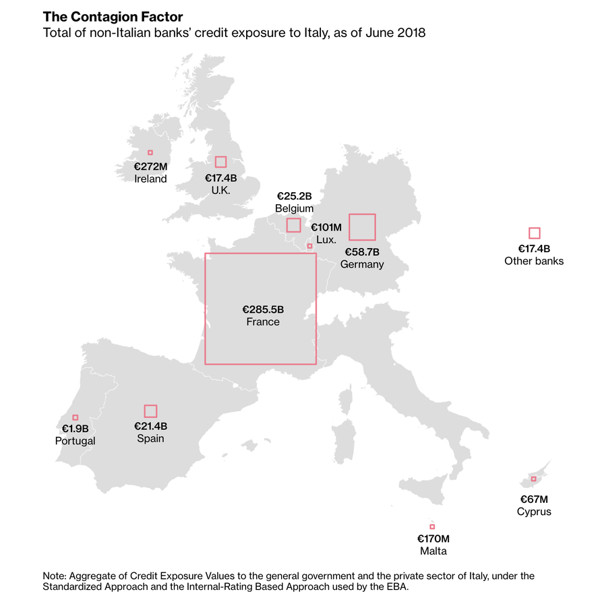 In Cool Britannia, the Bank of England left rates unchanged in the face of -what else? – BREXIT uncertainty along with a slowing global economy.  The BoE reduced its growth forecast to just +1.2% this year, down from its previous forecast of +1.7%. The bank has thus officially joined the Federal Reserve, Reserve Bank of Australia, the Indian central bank and others in retreating from multiple future rate hikes intended to ‘normalise’ rates.  (As an aside, this shows the unwisdom of dropping rates so low after the Panic of 2008) 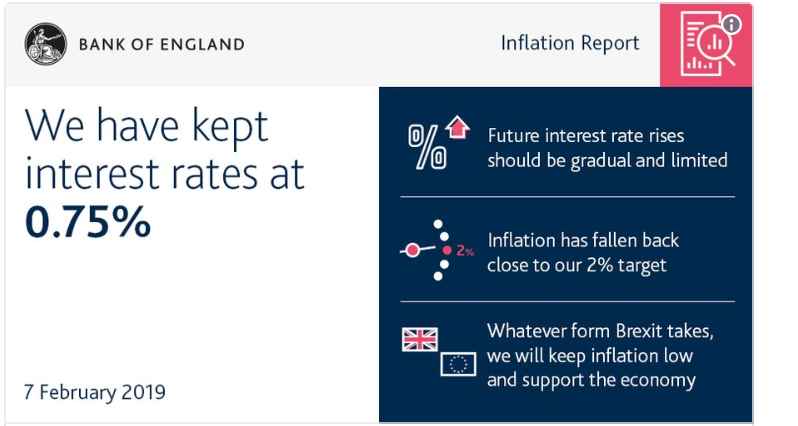 It should come as no surprise, then, that with all this talk of slowing economies, economic uncertainty and central bank rate-hike postponements, bond yields have been declining or, as our friend the bond salesman would put it, ‘heading south’.  This chart of the US 10-year treasury bond, our friend’s favourite bond, illustrates the recent decline in government bond yields quite graphically:– ‘From The Upper Left To The Lower Right’

Declining bond yields are characteristic of a slowing economy.  Although the US economy has its issues – and the Canadian economy as well – still their overall performance outranks that of their peers.

The coming week sees a minimal number of Canadian economic releases and a large number of secondary US statistics, but the December Retail Sales should be worth a second look.