Last week proved rather sluggish, despite a plethora of US economic releases and overseas central bank activity. Let’s wade through the numbers and see what our betters had to tell us.

There was nothing of note stats-wise in the True North last week following the soft jobs numbers of the previous week. Regardless, traders are still anticipating an 80% chance of a rate hike by the Bank of Canada at its next meeting scheduled for October 24th. At the present time, from the historic lows seen after the Panic of 2008, the Federal Reserve has raised rates seven times while the BOC has lagged at just four hikes. With the Fed widely expected to raise the funds rate again in its next meeting slated for September 25-26, the BOC apparently has little choice but to follow suit. 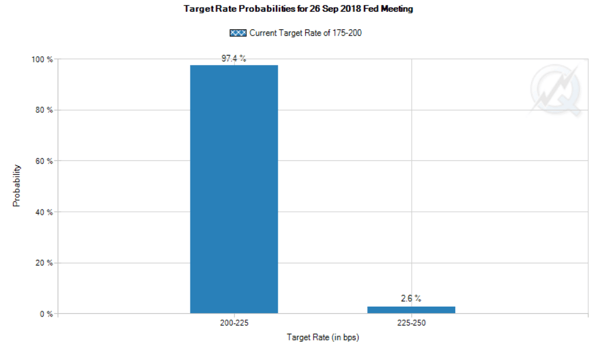 None of this will be sufficient to dissuade the Fed from raising rates at its next meeting. The economy continues to chug along, creating jobs and using up the pool of available workers while Americans’ earnings are rising. The University of Michigan preliminary September consumer sentiment index registered 100.8, well above the consensus of 96.6 – a great number! So something must be going right in the Land of the Free. 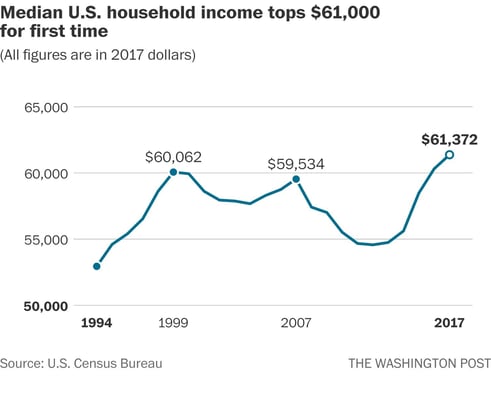 Markets have been sluggish in recent weeks, with exchange rates, equities and bond yields trading in relatively tight ranges. The on-again, off-again trade dispute with China is not helpful, nor are the unresolved NAFTA negotiations between America and Canada. On top of that are the US mid-term elections scheduled for November 6th – not that long from now. While Mr. Market typically looks ahead not much further than the next trade or two, still players have some concerns over the makeup of Congress post-election. Democratic gains in the House of Representatives could result in a split Congress and likely government paralysis, as Democrats in the House may pursue an impeachment agenda against President Trump. Likely continued Republican dominance of the Senate would forestall a successful impeachment but that’s really beside the point; the Trump administration would be paralyzed and the Trump agenda would be stalled. To the extent that investors give this any thought, there may be some reluctance to over-commit to the market at present levels. Just in and out and play it safe – hence the current sluggishness.

Elsewhere, the Bank of England voted unanimously to maintain the overnight rate at its current level. The BOE was positive in its outlook, stating that economic activity had perked up and raised its estimate of Q3 GDP growth to +0.5% from the previous estimate of +0.4%. It also acknowledged growing uncertainty over the whole BREXIT business. 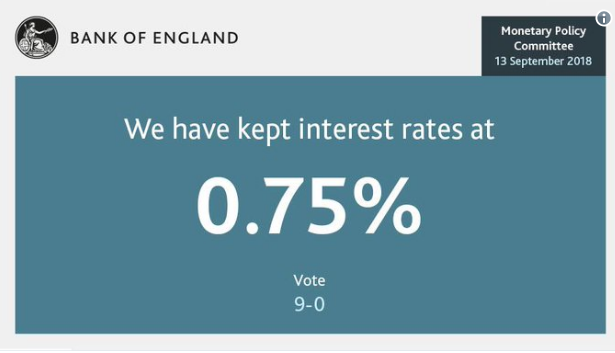 In the EU, the EURO gained ground despite the ECB leaving rates unchanged, and even as the Bank downgraded its GDP forecasts for 2018 and 2019 from +2.1% to +2.0% and +1.9% to +1.8% respectively. Traders ignored this bearish news and focused on ECB boss Mario Draghi’s description of growth as ‘still solid’ and his view that inflation may be picking up. The latter not in so many words, of course; M. Draghi is a central banker, after all, and clarity of speech is not the goal.  But players took his remarks bullishly and rallied the EURO sharply.

Fun fact from the tweeter-in-chief:

The coming week sees only a handful of secondary releases in the US, while Canada is quiet until Friday with retail sales and inflation numbers on tap.