I was all set to pen this newsletter about how the currency market was going into snooze mode (dog days of August) for the rest of the month till the annual policy symposium at Jackson Hole on August 24-26 - until, you guessed it, President Trump's "fire and fury" threat.  The escalation of tensions between the U.S. and North Korea was the key driver in currency movements this past week.  The escalation of threatening rhetoric from both sides drove the Japanese Yen and Swiss Franc higher.  Most media pundits mistakenly labelled this move as safe haven flows.  The only real safe haven flow was into gold, which was up 2.4% on the week.  The moves into JPY and CHF were actually the reversal of risk on trades, i.e. risk aversion.  You see, because Japan and Switzerland have the lowest interest rates in the world (they’re actually negative), investors borrow funds in these currencies and convert them (sell them) to invest in other countries.  With the onset of the war rhetoric, said investors got nervous (as they should be) and sold their investments and bought JPY and CHF in order to return the borrowed funds to the creditor.

By the way, I went for a little sensationalism by naming this piece DEFCON 5.  For those of you that don’t know, DEFCON is an alert state used by the United States Armed Forces – it recommends five graduated levels of readiness (or states of alert) for the U.S. military.  To be clear, despite all of last week’s escalating tensions, the US remains in DEFCON 5, the lowest state of readiness (normal).  In fact, in its 33 year history, the warning levels have only changed five times.  DEFCON 2 was reached during the Cuban Missile Crisis of 1962 and the Gulf War of 1991.  DEFCON 3 was reached during the Yom Kipper War of 1973, Operation Paul Bunyan after two U.S. Military officers were killed by North Korean forces in 1976, and the September 11 attacks of 2001.  We don’t want to downplay the tensions but we also don’t want to play it up either – the threat of something happening is high especially after North Korea’s threat to shoot some missiles into the waters off Guam as a display of force on August 15th

The only other currency that saw an outright move was the NZD.  The NZD lost 1.34% of its valve last week not because of US/North Korea tensions but rather through some good old fashion central bank jawboning.  Last Wednesday, The Reserve Bank of New Zealand left interest rates unchanged, as expected, at 1.75%.  The RBNZ Governor Wheeler expressed confidence that the economy would expand by more than 3% over the coming years.  He also said that house price inflation could pick up after the election and that a lower NZD would help.  However, later in the day, during his testimony to Parliament, Governor Wheeler used much stronger language.  He said the option to step in is “always open”, adding that the central bank has intervened in the past and is “always assessing” if doing so is appropriate again.  Assistant Governor McDermott went one step further. He said that officials pointedly dialed up their rhetoric about the exchange rate – saying the currency “needs” to adjust lower – to signal a “first step toward possible intervention". 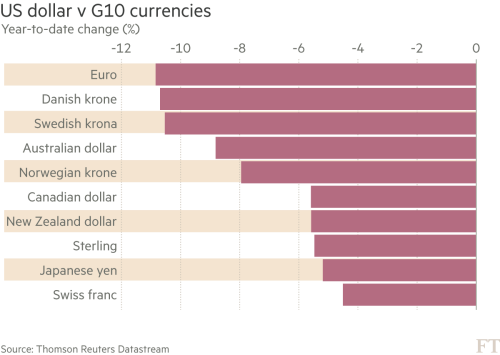 Prior to these escalating tensions, investors had already fallen out of love with the USD since the start of the year.  The USD is currently in its longest slide in six years.  To put this in perspective, look at the turnaround of the euro – it started the year at around 1.0340 and currently stands at 1.1825 – that’s a stunning turnabout, especially since the Fed is in the middle of a hiking campaign.

Why has the dollar been sold?  For starters, investors don’t believe the Fed will continue to raise interest rates because of the lack of inflation.  The Fed itself has been surprised by the continued weakness of inflation.  Another reason for the lack of investor conviction is that outside of employment growth, US economic performance has been lackluster at best.

Shifting to politics, here are two more reasons for the USD selloff.  Firstly, the failure of President Trump’s party to enact his legislative priorities of fiscal stimulus and tax reform, including the latest attempt to repeal and replace Obamacare.  Secondly, the impact that negative political news of the White House’s political turmoil is having on investor sentiment.

The other reasons for the USD’s 2017 slide have to do with central banks, perception, and debt.  As we have discussed several times in this newsletter, monetary policy convergence has been a key driver of the USD weakness.  Simply, the Fed isn’t the only central bank raising rates and normalizing policy anymore.  Investor perception of the true nature of President Trump’s “America First” agenda is also adding to negative USD sentiment.  Trump on more than one occasion, has talked about wanting a weaker USD.  Also, renegotiating NAFTA and talk of trade wars, especially with China, has helped fan protectionist trade rhetoric.  Lastly, the inability to raise the nation's debt ceiling is adding to USD angst.  With this current political climate, the possibility of not reaching an agreement and causing a default is very real and would cause a downgrade of the US's credit rating, which would increase the government's borrowing costs, and the undermining of the full faith and credit of the country.

Where does the USD go from here?  As we mentioned earlier, we are in the dog days of August and putting the US/NK tensions aside, the dollar has reached strong support and amid bearish sentiment and has a chance to bounce here like it has on two prior occasions.  However, if ECB President Draghi signals at the Jackson Hole conference that the ECB is retreating from monetary stimulus, after more than two years of quantitative easing, then this will only add to the USD’s woes.