A look at the weekly relative performance chart demonstrates that the USD tumbled against all of the major currencies last week.  This may seem puzzling since everyone in the universe knows that the Federal Reserve raised interest rates for the first time this year by 25 bps and for the third time since the 2008 financial crisis.  However, the two week lead up into the meeting saw a cavalcade of hawkish rhetoric by Fed officials which caused the March rate hike odds to soar from about 40% to 100%.  The feeding frenzy that ensued caused expectations of a much more hawkish Fed with extrapolations of three additional rates hikes during the balance of 2017 and maybe four in 2018.  As one can imagine, this caused markets participants to position themselves for a much more hawkish Fed announcement and when that didn’t occur the USD was sold down hard.

The Fed statement didn’t change much from the February one.  The Fed continued to see economic growth expanding “at a moderate pace”.  They upgraded their viewpoint on capital spending by saying it “appears to have firmed”.  They also acknowledged that “inflation has increased in recent quarters, moving close to the Committee’s 2% longer run objective”.  Surprisingly, Neel Kashkari was the lone dissenter, voting against taking action.  Kashkari was Assistant Secretary of the Treasury for Financial Stability from October 2008 to May 2009 and he oversaw the Troubled Asset Relief Program (TARP) that was a major component of the U.S. government's response to the financial crisis of 2007–08.  One cannot help to think that his experience during the crisis makes him extra cautious.

The Fed didn’t change their dot plot and thus remain on pace with two more hikes for the balance of the year.  Only five dots showed more than three hikes this year -- the exact same as there were in December.  Also, as you can see from the graph below, four hikes weren’t even a consideration of the majority of Fed members.  Stepping back, it is clear how the Fed’s dot plots have been steadily going down over the last couple years. This suggests that, just maybe, the Fed should have started their rate hiking cycle earlier.

Another thing to ponder, why have the dots become more dovish – could it be that the economy isn’t that strong?  The Fed did not alter their 2.1% 2017 GDP growth forecast and that is also their 2018 GDP forecast (from 2% prior), which tells us that they don’t expect much of an impact from President Trump’s economic policies. During post FOMC meeting press conference, Fed Chair Janet Yellen indicated that the economy had not changed much since December – talk about irony, that very morning the Atlanta Fed cut its Q1 GDP forecast from 1.2% to 0.9%.  As a reminder, the number was as high as 3.4% one and a half months ago.  This of course fans the conspiracy theorist meme that the only reason the Fed is raising rates at this time is so that they have ample room to cut them when they need to.

Enough about the Fed, let’s turn our attention to the other central bank.  The European Central Bank was in the news last week when two of its members made some key comments about possible policy changes.  Ewald Nowotny, the Austrian ECB council member, said that the ECB could raise the deposit rate before its main refinancing rate and that it could do so before ending its bond purchasing program (QE).  Meanwhile, ECB chief economist Peter Praet said that the outlook is now better than it has been in many years.  When you hear comments from two of the most-experienced core members of the ECB and they aren't prone to comments that stray from Draghi's thinking you have to take notice.  This may be a signal that the ECB is about to switch gears and if that is the case then we may have seen the bottom in the euro and the next import levels would be 1.15 or 1.20.  In fact, the only way that the euro would go down to parity against the USD would be if Marie Le Pen were to become France’s new Prime Minister.

The Bank of England held its policy meeting last week as well.  They decided to leave rates on hold, but it was a hawkish hold because one policymaker wanted to raise rates immediately.  The other major central bank, the Bank of Japan, has already adjusted its aggressive balance sheet growth.  Thus, we can say that the level of dovishness within the global policymaking ranks is diminishing, which would weigh heavily on the USD.

The technical condition of the US dollar index has deteriorated due to the Fed’s failure to signal a more hawkish pace then the market had priced in and the increasing probability that other central banks are about to make policy U-turns from dovish to hawkish.  The 5-day moving average has crossed below the 20-day average for the first time in a month.  The technical momentum indicators are flashing that more downside is in store for the index.  The price action has fallen through the upward sloping trend line connecting the lows from early-November low to early-February.  The index looks poised to return to at least its early February lows.  If that breaks then a move to the 200-day moving average, which is currently at 98.28, is not out of the question. 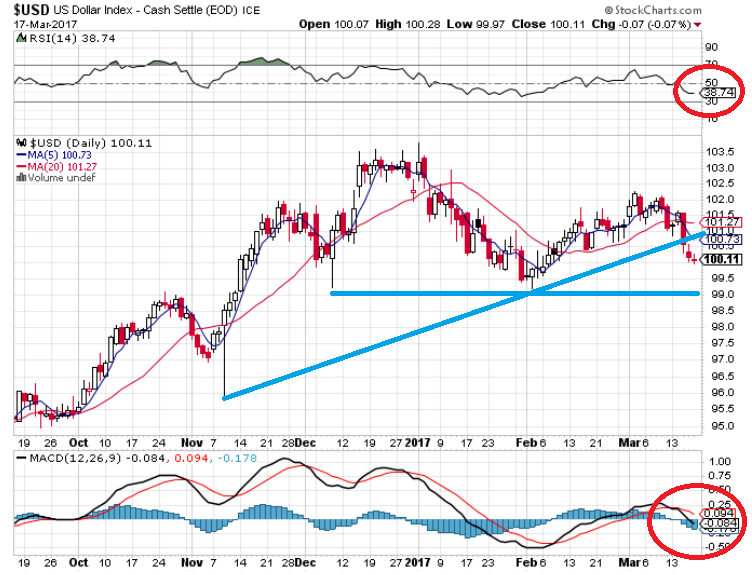