The main story of the week was that the US Federal Reserve dropped the biggest hint that its rate hiking cycle is over, and the bulls ran – bonds, stocks, and gold all went up while the USD sold off aggressively.  The Fed made it very clear that they have no plans to raise interest rates anytime soon.  The Fed’s new mantra will be patience and flexibility – patience when it comes to rate hikes and flexibility towards its balance sheet roll off, which is no longer on autopilot.

There were a few key changes to the FOMC statement.  First, “in light of global economic and financial developments and muted inflation pressures” they would be patient as they determine what “future adjustments” to interest rates would be appropriate, which was changed from “assuming further increases to interest rates.”  Second, the sentence referring to the “balance of risk assessment” was removed from the statement.  Third, central bank called US economic activity “solid”, a change from “strong” in the December statement.  Lastly, the Fed discussed the balance sheet and linked it back to economic and financial developments instead of the previous “policy signals and its reaction function”.

The not-so-subtle change in wording as mentioned above from assuming further increases to interest rates to merely future adjustments – not only leaves the door open to potential interest rate cuts if the economy deteriorates, but also screams that the Fed has shifted from a hiking interest rate bias to a completely neutral stance.  This is a stunning 180-degree reversal from a central bank that just raised interest rates at its last meeting in December.  What happened?  Are you trying to tell me that the greatest economy in the world (according to President Trump) can handle an effective Fed funds rate of around 2.25%?

Ok, now I get it – the big slide in the stock market.  The market volatility and financial panic after the last rate hike in December proved too much for the stock market to handle.  Plus, President Trump’s criticism of the Fed tightening too much has caused the Fed to fold.  From now on, when we hear that financial conditions are tightening this means that the Dow Jones Industrial average is below its 200-day moving average and the Fed will have to say or do something to calm fears.  Sounds like we now have a Powell Put.

The other big news in the US last week was Friday’s US jobs data.  The US economy added 304K jobs last month, nearly double the 165K expected, however much of this appears to have come at the expense of a revised December number which was revised lower from 312K to 222K.  Nevertheless, it set a new record - the 100th consecutive month of consecutive job growth.    Now before we start worrying that this number may boost the chances of a rate hike in the next several meetings, I’ll give you three reasons why it won’t.  First, the Fed’s pivot to neutral trumps all data at this point.  Two, the jobs data is a late cycle indicator which isn’t offering any new information.  Three, the US economy is already at full employment so stronger or weaker numbers isn’t going to change that in the short term.

In Europe, economic data continued to demonstrate the significance of the economic challenges in the Eurozone.  Economic growth in the 19-member Eurozone bloc was just 0.2% in the final quarter of 2018, which was unchanged from the third quarter. But that’s a far cry from the 0.4% growth in the first two quarters of the year.  Italian GDP data showed the country is now in a technical recession as GDP contracted by 0.2% quarter/quarter in Q4 after a 0.1% fall in Q3.  Meanwhile, the central bank for Europe’s largest economy, Germany, warned on soft growth this year and said inflation forecasts are likely to miss to the downside.  Furthermore, Germany experienced the sharpest monthly drop in retail sales since 2007 with a decline of -2.1% on a year over year basis versus a consensus expectation of 1.5% gain.  But guess what, the euro was up on the week because the euro’s strength is more a function of USD weakness then weak Eurozone data. 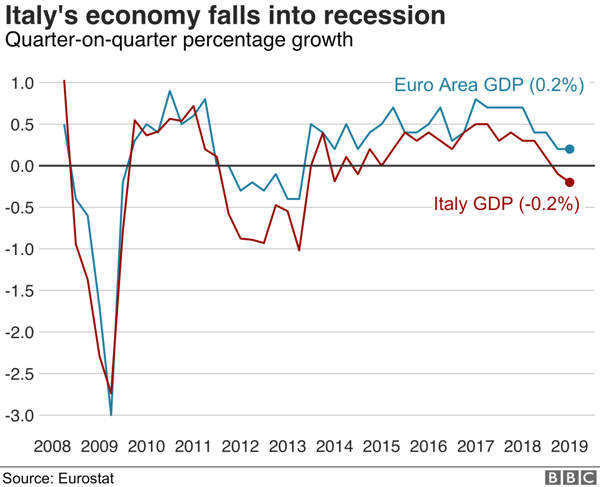 In the UK, what can we say; it’s still about Brexit, Brexit, Brexit.  It took a year and half for May’s government to negotiate the exit agreement which has been rejected by Parliament.   Parliament wants an agreement which excludes hard borders between the two Irelands and Ireland and the UK.  The European Union says that this is not negotiable – so it’s a game of chicken until the divorce date.  The GBP has gone from strength to weakness and the closer we move to the deadline date without any progress in talks the sharper the moves will be.

The Canadian dollar is up big in the month of January (3.9%) after suffering its worst annual performance in three years.  January’s performance is the CAD’s best month since June 2017 and its best start to a year since at least 1971.  The main drivers for this powerful rally have been a combination of diminishing Fed rate rise expectations and a rally in the price of crude.  News this week that the Canadian economy contracted in the month of November 2018 by 0.1% was shrugged off by Mr. Market, mainly because the Fed’s pivot outweighs the data.  Meanwhile, the Bank of Canada’s message that more rate increases may still be necessary after having hiked them to a 10-year high is lending support to the currency.

In the week ahead, outside of service PMI, we don’t see any economic data that would change Mr. Market’s mind set of USD weakness due to the Fed’s pivot to a neutral monetary stance.