Mr. Market is certainly living in “interesting times”, as the Chinese proverb says. On the one hand, despite the ongoing COVID-19 pandemic, equity markets continue to rally. The NASDAQ index is now showing positive for the year, as players discount a reasonably strong economic recovery in the near future. However, if a strong recovery fails to appear, traders appear confident that national governments and central banks will simply spend more.

On the other hand, the once-feared “bond vigilantes” are nowhere to be seen, as national governments and central banks issue debt and print money with apparent abandon. Bond issuance is at record levels – more below – yet bond traders (normally a skittish lot) are reacting with equanimity as the supply of debt explodes while short-term US bond yields appear poised to go negative. On top of that, in the real world, economic pain and distress mounted in April, with the release of ghastly jobless numbers in North America. Let’s take a look and try to sort it all out, shall we?

The Land of the Free

American jobless numbers for April were truly disastrous although, oddly enough, not quite as bad as had been feared. A total of 20.500 million jobs were lost vs the street call of -22.0 million. 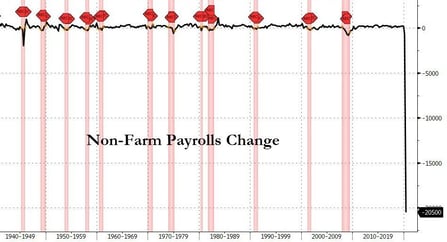 Not much doubt here...

The jobless rate, which only recently stood at a 50-year low of 3.5%, hit a record high of 14.7% in April (the highest since the early postwar era) but still better than the consensus call of 16.0%. 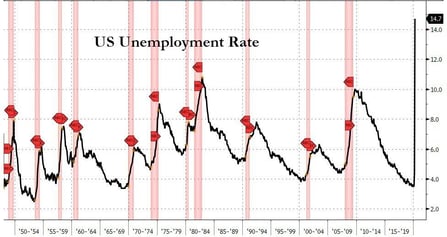 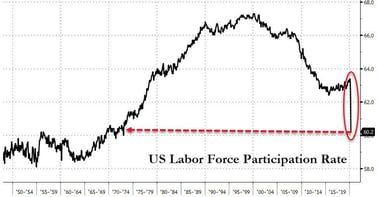 As evidence of the Trump administration’s massive deficit spending intended to combat the virus-induced slowdown, the US treasury announced a record-sized auction for this week, seeking around 96.0 billion in a four-tranche funding (57.0 maturing bonds, 39.0 new cash). In an attempt to find more buyers for all this debt, a twenty-year treasury will be offered as part of the auction, for the first time in over thirty years. Normally-nervous bond traders greeted this news with a shrug. How times have changed! “Bond King” Jeffrey Gundlach summed it up well in a recent tweet:

For the week, the USD was in the middle of the pack as developments in the UK and the EU eclipsed even the grim jobless numbers in America.

Canadian jobless numbers for April were just as awful as those in America, with total job losses of -1.994 million vs analysts’ call of -4.0 million (!). The unemployment rate rose to 13.0% , well below the call of 16.6% - scant consolation to the newly jobless. 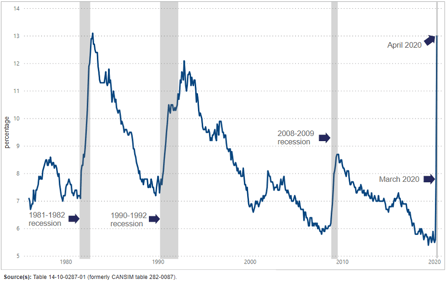 An uptick in crude oil prices (largely due to production cuts announced by Saudi Arabia and others), along with a corresponding rise in Western Canada Select (WCS) prices, helped steady the loonie and outperform the greenback on the week.

The big concern at the Bank of Canada, one which it has flagged many times in the past, is the overwhelming indebtedness of the average Canadian. The Bank is especially worried at the high number of mortgage deferral requests –  over 720,000. This deferral period ends in September and, at that time, many homeowners may be unable to resume their regular mortgage payments.  Should this programme not be extended, these hapless homeowners may be compelled to sell in large numbers. As a result, the real estate market may invert to a buyers’ market, with all that implies for house prices and those owners with high-ratio mortgages.

The Bank is right to be concerned, and incoming Governor Tiff Macklem will have his hands full when he replaces outgoing Governor Stephen Poloz on June 3rd.

The European Commission (EC) released its Spring 2020 economic outlook for the Eurozone, and it wasn’t pretty. The medical and social harm caused by COVID-19 in Spain, Italy, and elsewhere has been well-documented. At the same time, economic damage has spread throughout the Zone and is causing disruption on an unprecented scale. The EC is predicting a GDP contraction of -7.4% this year, along with unemployment rising to 9.0%. 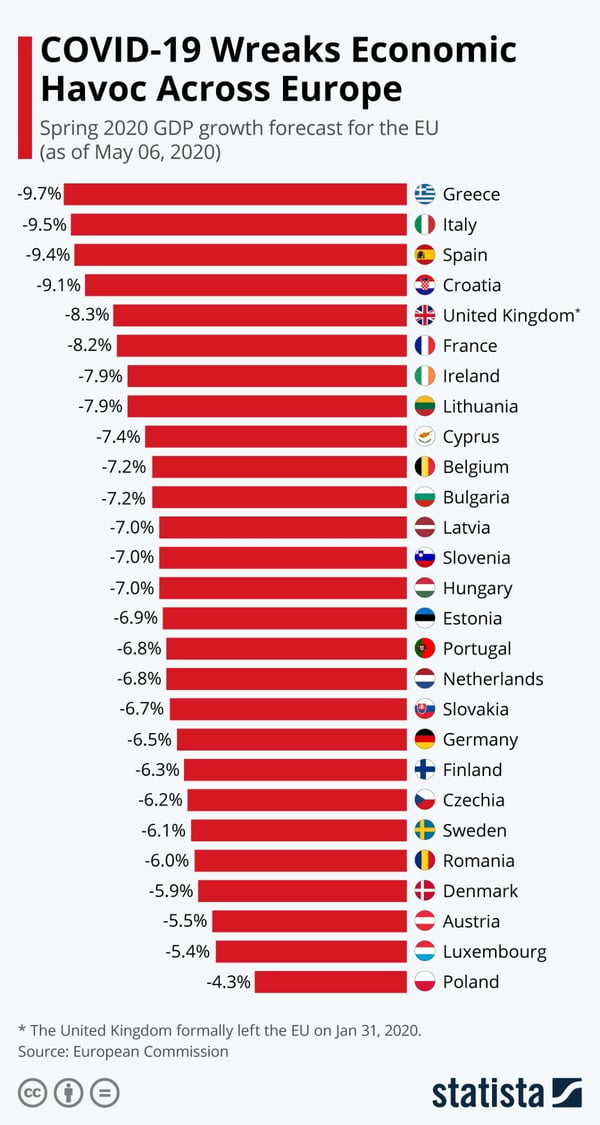 Not surprisingly, the euro was the loser on the week.

The Bank of England’s Monetary Policy Committee voted to keep its overnight rate at the current 0.1% and left its bond-buying programme (QE) unchanged at 645 billion GBP – the former unanimous and the latter 7-2.  (There may be an increase in QE announced at the June MPC meeting).

Additionally, the Bank  released its forecast of a 2020 GDP drop of -14.0% followed by a V-shaped recovery commencing in 2021. The following graph illustrates the severity of the current downturn: 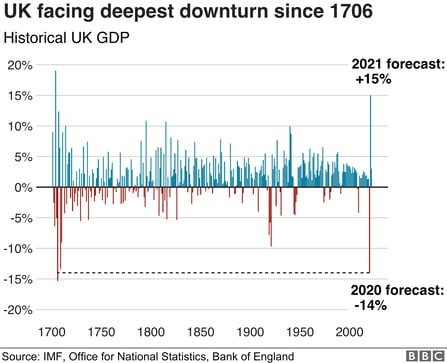 Again, like the euro, sterling trailed on the week as the virus progressed.

The coming week sees a packed calendar of mostly secondary releases, all of which will be overshadowed by COVID-19 for the time being. Some Fedspeak scheduled but nothing spectacular.