That is certainly the case for those living in the Great White North, following stellar employment numbers released this past Friday. In America, on the other hand, maybe not so much. Let’s take a closer look, shall we?

The Canadian economy created a net of +32.3K new jobs in March vs the call of +20K. The jobless rate held steady, as expected, at 5.8%. The real surprise was in the breakdown: Full-time +68.3K / Part-time -36K with 18.3K of those full-time jobs in construction. The rate itself is at levels not seen since 1976, the year of the Montreal Olympics (!). Wages are firming up as well, with pay rising +3.3% annually in March, topping February’s +3.1%. Manufacturing was the only dim spot in the report, shedding -8.3K jobs in the month, and only likely to worsen in the months ahead should the loonie continue to rally. After all, it was the clear winner on the wee.

All of this is a roundabout way of saying that Bank of Canada Governor Stephen Poloz may find his options limited going into the next BOC meeting, scheduled for Wednesday April 18th. While Mr, Poloz had been less than emphatic in his remarks several weeks back about the future path of rate hikes in the True North, the reality is that economic data (which the Bank claims drives their rate policy) may force their hand if current strength continues.

In America, on the other hand, not so good. March employment numbers, while not disastrous, were certainly a disappointment. Following a strong ADP preliminary number last Wednesday (+241K vs call +210K) and an apparent easing of trade tensions – more below – investors relaxed, Mr. Market bought equities with confidence and USD firmed, albeit slightly. All for nought come last Friday morning. Analysts had called for a rise in payrolls of +185K and the jobless rate dropping to 4.0%; the actual number was +104K jobs, the rate falling to 4.0% and the two month net revision was an horrendous -50K jobs. Not good, not good at ALL. Hourly earnings and hours worked came in all as expected, so no surprises there, but that’s really beside the point. There appears to be some weakness in the American economy, and it’s not immediately apparent. Or is it?

Our learned colleagues Dr. Long and Mr. Short provided us with a graph of one of the more obscure economic measurements, that of US Railcar Loadings. As we have mentioned before, American railways have enormous exposure to the American economy – transporting raw materials into and finished goods out of factories, chemicals, coal, oil, bulk commodities, agricultural foodstuffs and on and on while dominating long-haul and intermodal traffic. Any downtick here may be a symptom of weakness elsewhere.

As can be seen, rail freight volume peaked in 2006, hit a nadir in 2009 and rebounded in fits and starts during the Obama administration. A rally following a major downtick in 2015 ended shortly after the election of Donald Trump and has resumed its sluggish course. The measure has actually declined since late 2017, so something isn’t quite right here.

The issue dominating markets last week was the on-again, off-again bellicose trade rhetoric emerging from Washington. On the one hand, traders bought the Mexican peso and Canadian dollar on news that Mr. Trump wanted a NAFTA agreement in place for the Summit of the Americas, slated for April 13-14 in Peru. On the other hand, Mr. Trump lashed out at the Chinese late last week, announcing $100 billion in new tariffs on Chinese imports following China’s imposition of 25% tariffs on a range of imported US goods including, curiously, soybeans, and that followed $50 billion in tariffs initially imposed by America on Chinese imports. What is really going on here?

To begin with, the NAFTA dust-up is, in our view, just a distraction from the real game (Opening Pitch March 26). An agreement in principle – which is really all that can be obtained at present – will allow Mr. Trump to claim victory and then focus his attention on China, in his view the real culprit. In reality, it will be considerable time before a revised NAFTA can be put in place, given legislative and electoral cycles in the three member countries but no matter; Mr. Trump can say he won. For now, at least, Canada and Mexico have been slightly bruised but no worse than that, and it certainly could have been much worse. Going forward, so long as both countries avoid having steel and aluminium duties (25% and 10% respectively) re-imposed on May 1st, there should be little lasting negative effect.

The trade conflict with China is a much bigger deal, and at times we wonder if there is an element of play-acting about it, as though both sides are following an agreed-upon script. There is no doubt that China needs unfettered access to the giant American market, both to obtain hard USD currency and to provide steady jobs to tens of millions of Chinese workers. As history demonstrates, social stability is something sought by Chinese governments and trade friction puts it at risk. On that basis, chairman Xi Jinping has an incentive to avoid a full-blown trade war while appearing to be standing up to Mr. Trump, while Mr. Trump has an incentive likewise to avert a trade war, avoid antagonizing America’s largest single creditor all the while appearing to call out the Chinese on their (alleged) unfair trade practices. Good luck with that. For this reason we think it may be scripted. (Our money, though, is on Mr. Trump).

Jobs for All in the Middle Kingdom – For Now?

Equity markets responded negatively at first to talk of trade wars, but now appear to realise that it is generally better to heed what Mr. Trump does rather than what he says. USD traders appeared to agree, with the USDX holding steady just above 90.00 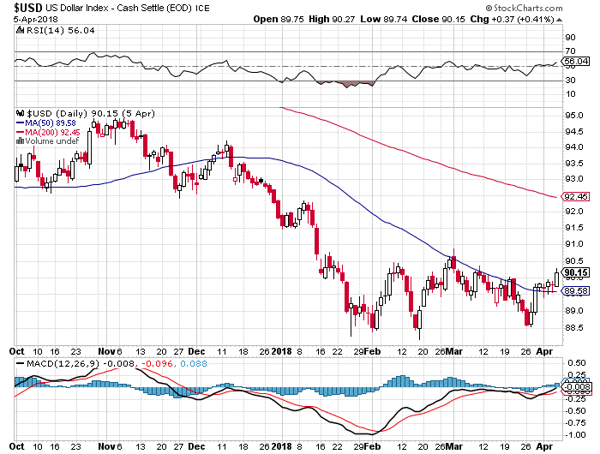 .The coming week sees little of note in Canada. Stateside sees inflation numbers along with a handful of Fed speakers.