Last week saw central bank announcements and key economic releases which, in the case of the latter, surprised both to the upside and downside.  The whole uncertainty excuse appears to be making a comeback, so let’s take a closer look, shall we?

We’ll start in the True North, as that is where the greatest upside surprise occurred.  Last Wednesday the Bank of Canada held its overnight rate steady at 1.75% as was widely expected.  However, Governor Stephen Poloz was considerably more dovish in his outlook than in the recent past, referring to the ‘mixed’ data picture and ‘increased uncertainty’ about future rate hikes and that, given all this, lower than neutral interest rates may be justified going forward.  (Mr. Poloz may have taken a page from Fed chief Jay Powell’s  script).  Additionally, the BOC admitted that its growth projections were perhaps a touch rosy going into 2019, as the slowdown in Q4 2018 was ‘…sharper and more broadly-based.’  Consumer spending in the quarter was soft, capital spending was down, exports were off – all the usual negatives.

With all this downbeat news, Mr. Market was only too happy to whack the loonie hard in anticipation of weak employment numbers last Friday.  Analysts had predicted a net of +4K jobs created and the rate holding steady at 5.7%. In the event, a net of +55.1K jobs were created of which 67.4K were full-time with a loss of 11.6K part-time jobs.  Wages are rising as well, as average annual hourly wages rose +2.3% from the previous +2.0%, indicating employers may be bidding up for labour.  These job gains may look set to continue, as Canada currently has in excess of 500K job vacancies!  The BOC may be forced to revise its recent dovish tone. 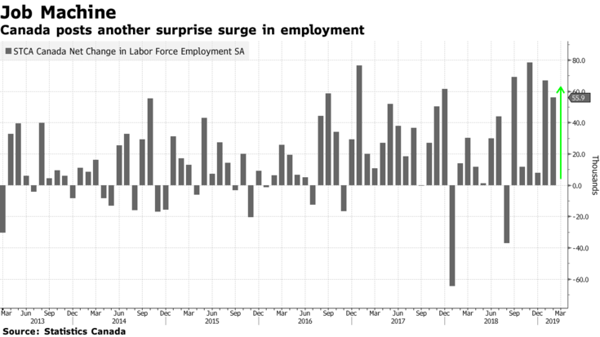 Stateside it was quite the opposite, with a mere +20K jobs created versus the call of +188K jobs and last month’s explosive +302K jobs.  The rate dropped to 3.8% as expected from the previous 3.9%.  Our learned colleagues Dr. Long and Mr. Short were quite taken aback by these numbers, but seem to feel that this may be a one-month blip, and that the trend for further US job growth is still intact.  Additionally, they both analysed (for our benefit) the recent release of the Fed’s Beige Book, the report by the twelve Federal Reserve districts on local economic activity.  Ten described growth as ‘slight to moderate’, while two reported ‘flat economic conditions’.  The recent government shutdown was fingered as a culprit along with harsh winter weather.  The word strong appeared but 37 times, while in January it appeared 58 times and October 83 times.  As well, mention of tariff has declined while slow has increased: 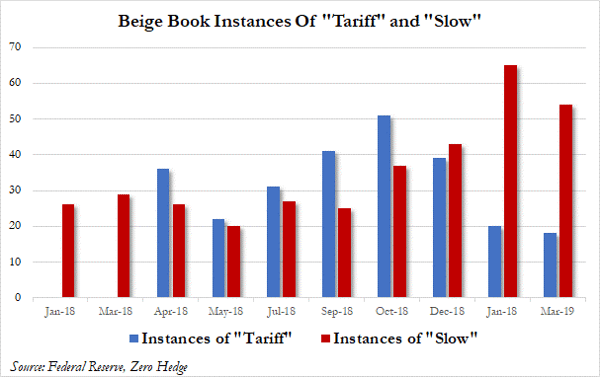 Regardless, despite soft jobs numbers and an apparently sluggish Q1 start to the year, with other currencies generally in disarray the greenback is still the one to beat.

Speaking of currencies in disarray…the EUR is having a difficult time of it these days.  At last Thursday’s rate announcement, ECB chief Mario Draghi admitted the bank’s 2019 inflation and growth forecasts were just so much fantasy.  Once again, our learned colleagues Dr. Long and Mr. Short distilled the salient points from M. Draghi’s verbiage:

This is not an economy doing well, despite protestations from Brussels.  The EUR was further pressured by announcement of new carry trade facilities and extension of the NIRP (Negative Interest Rate Policy) for an extended period, both of which amount to massive monetary easing.  Whether this time it will work – and so far it hasn’t – remains to be seen.  At any rate, the EUR was one of the big losers on the week, performing only slightly better than GBP, the latter still suffering under BREXIT uncertainty. 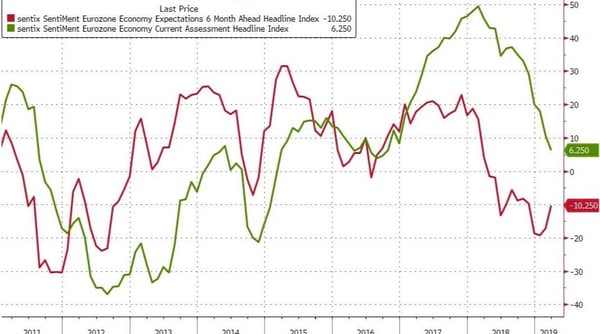 EuroZone: Not Exactly An Optimistic Outlook

The coming week sees some key secondary releases in both Canada and America, along with numerous Fed speakers and Fed chair Jay Powell speaking to Congress on Tuesday and Wednesday.