(3a: in or into a better or more advanced state)

The Old English word “up” has a myriad of definitions, but last week Mr. Market was quite happy with the sense noted above. US equity markets all hit record highs as investors cried “risk on”, while the greenback rallied; bond traders, always a jumpy lot, fled in terror. Let’s take a closer look, shall we, and see if we can make some sense out of all this.

We’ll begin in the True North, where the all-important October jobs numbers were released last Friday. Canadian employment statistics have been quite robust in recent months, so analysts had expected some giveback. In actuality, the economy lost a net of just -1.8K jobs vs call of +10K, while the rate held steady at 5.5% as predicted. Wages rose a strong +4.4% yr/yr, beating the call of +4.2%. However, the jobs gain/loss breakdown was not so good, with Canada losing -16.1K full-time jobs and gaining +14.3K part-time.

The loonie lost some ground on all this news, but not that much, as traders reckoned the Bank of Canada would look at the strong wage growth as sufficient reason to leave rates unchanged going forward. The loss of full-time jobs, while never good, was unsurprising given the strong job growth of recent months. 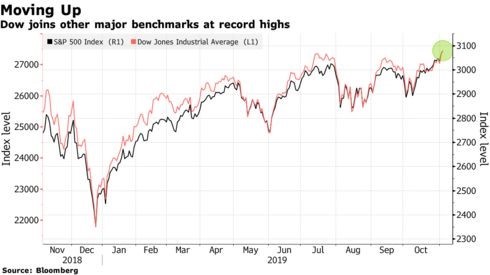 With Canada out of the way, let’s look more broadly at the reasons for market bullishness. Foremost is the likelihood of a Sino-US trade deal, sooner rather than later. Some nagging details still need to be worked out, but little question that a deal should be in place soon. President Donald Trump is up for re-election in just under a year’s time and a strong economy is always a key element to any re-election. Chinese leader Xi Jinping surely knows this, and the Chinese will likely push much harder for a deal acceptable to China. Still, both sides need a deal. This “war” has dragged on quite some time, with consequences for both sides, so a deal is likely imminent.

For the global economy, a deal ensures more growth, less trade protectionism, lower overseas trade costs, and higher profits with the spectre of recession banished into the future. Investors have largely factored in the Fed as standing pat on rates well into next year, while the Bank of Canada will probably be holding firm as well to see how the easing of trade disputes affects the domestic economy. In that sense, both CAD and USD may trade firmly going forward. In fact, the loonie lost little ground against the greenback last week but gained against other currencies on the cross-rates.

In Britain, the Bank of England left rates unchanged (as expected) but there were two surprise dissenters who voted in favour of a quarter-point cut, leading to a knee-jerk sell-off in sterling. 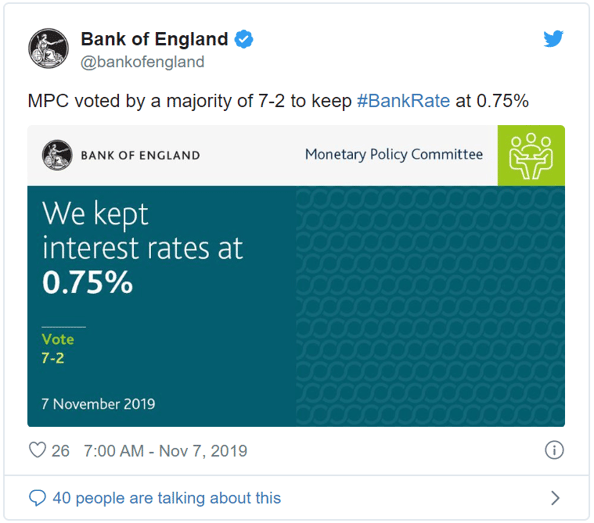 On the Brexit file, with the general election several weeks away on December 12th, opinion polls have appeared all over the UK. The Conservative Party led by PM Boris Johnson appears have a lead over its nearest competitor Labour, led by Jeremy Corbyn. Brexit, not surprisingly, is the major issue in the election, with 40% of respondents currently rating it as most likely to influence their vote. That compares with 18% at the outset of the 2017 election.

The upshot is that, with the BOE holding rates steady, voter polling will dominate market perceptions of GBP for the next few weeks.

Standing aloof from recent market optimism, the European Commission downgraded growth prospects for both the zone itself and its three major players. 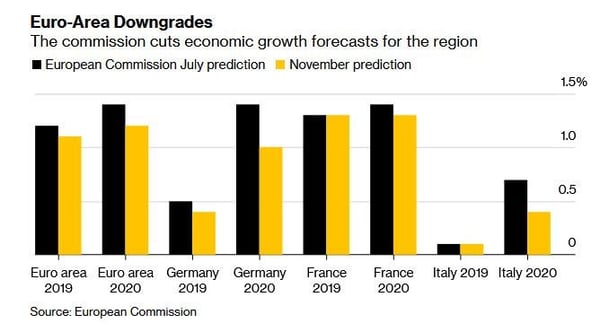 of the bigger losers on the week. Players will watch for this week’s release of both the Euro-zone and German ZEW Surveys of economic sentiment, as well as German Q3 GDP, to gauge the likelihood of further weakness.

Last week we had a chat with our friend the bond salesman and asked him to explain what was happening in the fixed-income market. We noted that equity markets were up, the USD was up, and bond yields were also up. He first pointed out that bond yields move in the opposite direction of bond prices, that rising yields mean falling bond prices (and vice-versa), and investors were selling bonds rather than buying them. He explained that bond traders are allergic to economic growth, as it causes inflation to rise among other things injurious to bond prices. The salesman added that, with talk of a Sino-US trade deal, strong job growth and consumer confidence, as well as delayed capital spending possibly coming onstream, perhaps the Federal Reserve might even look at raising rates soon (depending on how events play out).

Ill of this was too much for nervous bond traders, who hit the bids and headed for the exits. Our friend gave us some hard numbers: on Friday November 1st, the 10-year US treasury opened at 1.68% yield and the 30-year at 2.17%. One week later, on November 8th, comparable yields were 1.95% and 2.43% - a major sell-off. The salesman said this was actually a good thing, as historically bonds and equities move in opposite directions, and this might be the first tentative move to rate normalisation - something put off by central banks since the Panic of 2008. Small wonder the greenback was the winner on the week!

The coming week sees, in addition to the aforementioned German metrics, a paucity of Canadian economic statistics. We will also get American inflation numbers, Retail Sales, and a trainload of Fedspeak.