The New Zealand dollar was the best performing currency last week by a long shot, outpacing its neighbour, Australia, by more than double and it dollar cousin, Canada, by a factor of seven and half times.  All three were well supported by the “risk on” tenor of the overall financial market.  The NZD received a large boost in the middle of the week by its central bank, the Reserve Bank of New Zealand, which opted to leave its primary interest rate unchanged at 1.75%.  The RBNZ expects the rate to remain unchanged for a “considerable period”.  The central bank saw the risks to inflation as balanced which was a welcome development from the market’s previous cautious view.  The currency continued to rise for the balance of the week as headlines from the trade talks between China and the US (New Zealand’s largest and third-largest export markets respectively) were characterized as productive.  Talks were progressing in a manner that would carry over into the coming week in the US and talk that President Trump was considering extending the March 1st deadline for escalating tariffs on exports from China.

A break above overhead resistance around 0.6950 may come if a trade truce is reached between China and the US.

Meanwhile in Europe, the GBP and the EUR were both lower against the USD last week.  The lack of Brexit progress continued to mark the pound lower as the airwaves were filled with more rhetoric and political posturing.  The next meaningful parliamentary vote was delayed until late in the month and there were reports that Boris Johnson could support the current deal with a firm expiration date for the Irish backstop.  The uncertainty over Brexit is not only a negative for the GBP but for the EUR as well since European trade with the UK would also suffer from a no-deal (hard) Brexit.  Plus, the euro continues to be weighed down from its anemic growth.  Last Wednesday, the Eurozone’s largest economy, Germany, recorded no economic growth for Q4 of 2018, which was an improvement over the -0.02% recorded in Q3.  This means that Germany narrowly avoided a technical recession of two consecutive quarters of falling GDP.  With Germany struggling, that means that the rest of the Eurozone isn’t too far behind - Eurozone GDP expanded by just 0.2% quarter/quarter in Q4 and by a mere 1.2% on a year-over-year basis, down from 1.3% recorded in 2017.

The last standing, ultra-dovish, central bank is the Bank of Japan and last Tuesday they tapered its 10-to-25-year JGB purchases by 20 billion yen down from the 200 billion yen they purchased on February 4th. The last time they tapered was in July 2018 and this reduction drops the purchase amount to its lowest level since 2014.  Sadly, this taper may not be a sign that the BOJ is shifting its policy stance but rather an admission that the central bank may be running out of assets to buy.  Interestingly, this taper arrived a day before the BOJ’s 20-year anniversary of cutting rates to 0% and the start of two decades of extreme monetary policy from which neither Japan, nor any other country, has ever been able to extract itself.  During this time period, core prices in Japan are virtually identical to where they were 20 years ago and 10yr JGBs have fallen from 2.21% to -0.03%. 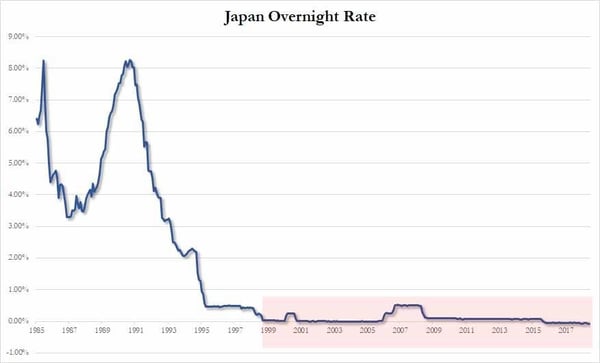 On Friday, during a press conference in the Rose Garden, President Trump announced that he would sign a federal spending deal hashed out by lawmakers to avert another government shutdown and that he will also sign a national emergency declaration over the "crisis" of illegal border crossings in order to fund the construction of his border wall along the U.S.-Mexico border.  President Trump took the opportunity to remind everyone, yet again, that the national debt doubled under President Barack Obama.  The national debt was at $10.6 trillion when Obama took the oath of office in 2009 and rose to $19.9 trillion by the time Trump took office in 2017.  Well the debt now stands at $22 trillion and in April 2016, then-candidate Trump told The Washington Post that he would eliminate the national debt, then around $19 trillion, in eight years.  I find that hard to believe coming from the self-proclaimed “King of Debt”, a title that fits his real estate empire and big-spending ego.

It’s no secret that Trump’s tax cut will cause trillion-dollar deficits for years to come.  Financing those revenue shortfalls will require ever-growing amounts of borrowing.  Thus, how the US government intends to fund itself has become a more pressing question.  According to the Treasury Bond Advisory Committee, the US will need to sell $12 trillion worth of bonds in the coming decade, which is sharply more than it did in the last 10 years.  This dramatic rise in borrowing needs will pose a unique challenge for Treasury over the coming decade just as foreign demand for America’s debt is stagnating.

With borrowing needs rising, the Trump administration picked a terrible time to pick fights with its lenders.  Once Trump is finished with his trade war with China he will turn is attention to Japan and Europe.  China and Japan, America’s two largest lenders by far, have pretty well withdrawn from the Treasury market.  They are not the only sellers – Friday’s release of the latest monthly Treasury International Capital data showed that foreign investors dumped over $77 billion in US treasuries in December, the most on record.  The big sellers were France, Brazil, and Germany.  In fact, the share of USD in the nearly $11 trillion of reserves reported to the IMF has dropped from over 65% when Trump was elected president to below 62% in the latest data. 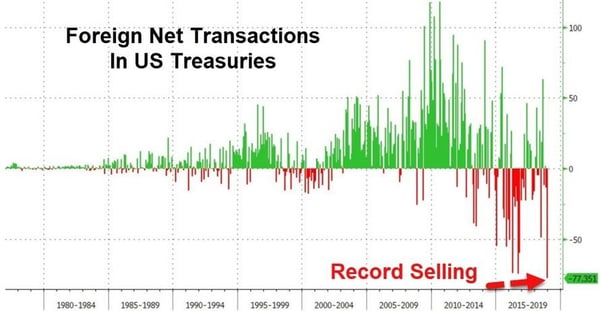 We haven’t even factored in the chance of a recession in the US in the next year or so.  Just this past week, the US economy experienced the biggest weekly collapse in US Macro data since June 2011.  This data, in no way guarantees that the economy is headed to a recession.   However, the US economy is more than 9 years into a business expansion, the longest on record, so logic would dictate that we are closer to the end of the expansion and thus closer to a recession. 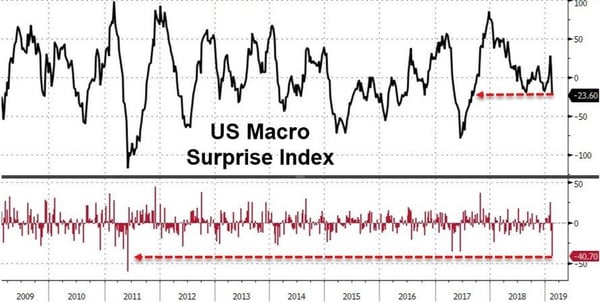 US politicians are famous for saying “deficits don’t matter”, which is somewhat true when you happen to have the reserve currency of the world and are blessed with the deepest bond market in the world.  The currency status allows the US to finance massive deficits with impunity until, of course, it doesn’t.  I sense that we are getting closer to that day.

So if foreigners are buying less that will leave domestic US private investors and financial institutions to fill the gap and, failing that, the Fed could always start a new round of quantitative easing.  To enhance my point, San Francisco Federal Reserve Bank President Mary Daly told reports on February 8th that the Fed is considering quantitative easing as a permanent option in its monetary toolbox and not just to be deployed in financial emergencies.  Something tells me that foreign central banks will not take too kindly to the currency debasement through the monetizing of the US national debt.

Given the US’s fiscal indiscipline and its sizable current-account deficit, central bank reserve managers will look elsewhere. Other currencies have their faults as well, thus the logical choice will be gold.  Reserve managers are already out in front of this – net purchases of gold by central banks rose by 74% last year to the highest in 47 years.  This is the highest level of annual net purchases since the suspension of dollar convertibility into gold in 1971 by Nixon. 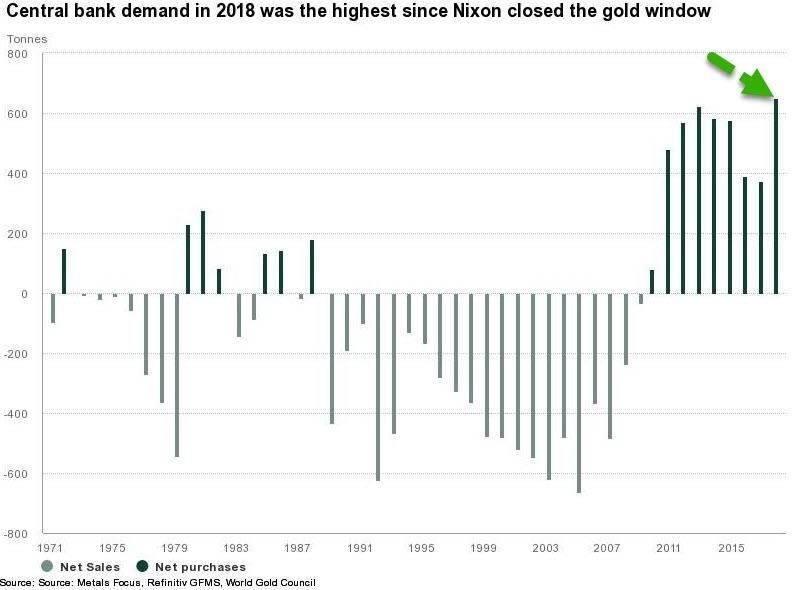