Activity last week was dominated by range-trading ahead of the widely-watched US and Canadian payroll numbers – the former for signs of weakness following consistent monthly growth, and the latter for giveback on recent outsized jobs gains.  Let’s take a closer look, shall we?

To begin with, the US labour market is strong. Something like six million jobs are going unfilled, according to the most recent JOLTS survey, while employers are hesitant to lay off current workers for fear that qualified replacements (when needed) will be difficult to find.  Our favourite labour market measure, weekly jobless claims, is now at levels not seen since the expansion Montreal Expos played their debut National League game in April 1969. 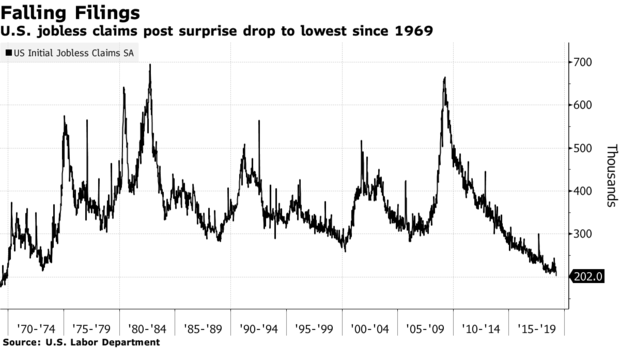 U.S. March employment numbers were good: +196K jobs created (call +175K) with the rate holding at 3.8% as expected.  February had seen just +20K jobs; clearly employers, having taken a break after January’s blow-out +311K jobs, were hiring once again.  Hourly earnings rose just +0.1%, which trailed the call of +0.2% and was well below the previous +0.4%.  We view this as an aberration.  Higher wages will follow inextricably with labour market tightness and, as our friend the bond salesman keeps telling us, rising inflation will put pressure on the Fed to tighten. Obviously, this would be a good thing for the greenback.  Additionally, a US-China trade agreement may be imminent, as both President Donald Trump and President Xi Jinping need a deal. The latter to maintain domestic workforce employment and social order, and the former to bolster his bid for re-election next year. A ratified US-China trade deal would reassure skeptical markets while encouraging a resumption of growth in international trade, all of which is a positive for the greenback.

In Canada, employment numbers were a touch more subdued.  While the unemployment rate held steady at 5.8%, total jobs declined by -7.2K (call: +6.0K); a far cry from the previous two months +55.9K and +66.8K, and likely an overdue giveback.

Last Monday, Bank of Canada governor Stephen Poloz spoke in Nunavut and laid out the Bank’s current thinking.  Mr. Poloz spoke about trade uncertainties weighing on the loonie and the global economy generally, acknowledged that the domestic economy was currently in a soft patch, and made clear his belief that current conditions warrant administered rates below a ‘neutral’ level.  The loonie gained some ground after this but ended up trading in a tight range for the week.

The EUR continued to wobble unsteadily against the USD last week.  Aside from the ongoing BREXIT issue (already well-covered in last week’s missive) and restiveness in several of the EU member countries, there was a cluster of grim news from zone paymaster Germany.  The export powerhouse just missed falling into technical recession in late 2018, with negative growth in Q3 and a slight positive blip in Q4 saving the day.  Regardless, international trade tensions, the tiresome BREXIT issue, and slowing global growth (read: China) do not augur well for German growth going forward.  The graphs below do not paint a pretty picture: 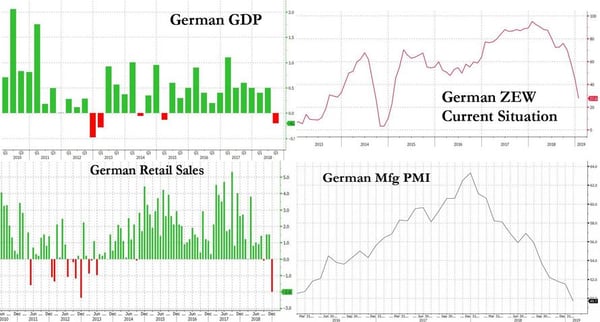 To make matters worse, German Industrial Orders declined -4.2% in February (call: +0.3%). On an annualized basis this works out to -8.2%, the biggest drop since the Panic of 2008.  The slowdown was widespread across both sectors and regions.

Enough BREXIT talk, though. What’s up with everybody’s favourite commodity, crude oil?  WTI crude has been trading firmly in the $60+ USD range for several trading sessions now, and even a surprise build in inventory failed to deter the bulls, so there may be further gains ahead.  This may not be good news for USD, as the greenback and oil trade in opposite directions (along with most other commodities), but would be welcome news for CAD.  Although the western oilsands have been hamstrung by delivery problems, pipeline construction hassles and a generally uncaring attitude evinced by the federal government, higher crude prices would help make these issues more manageable.

In a related issue, in response to possible American attempts to apply anti-trust laws to sovereign states dealing through OPEC, Saudi Arabia has threatened to begin accepting payment for crude in currencies other than the USD.  The issue arose in 2000 with the NOPEC bill – No Oil Producing and Exporting Cartels Act – intended to remove sovereign immunity from US anti-trust law.  This would permit OPEC states to be sued for price collusion which, not to put too fine a point on it, is precisely what they do.  The bill has never made it into law; President Trump, while not having voiced support during his current presidency, did back NOPEC in a book published in 2011.  Frankly, we doubt this will come to pass, but it serves as a reminder to America that while it controls about 10% of the world crude market, along with the Saudis and Russia each at 10%, there are other currencies which can be used to settle oil trading (EUR springs first to mind).  Additionally, with the rise of regional powers such as China and India, the hegemony of the USD in international payments may have begun to wane, with negative implications going forward for the greenback, American interest rates and debt issuance.

The coming week sees nothing of note on the Canadian calendar save the Ontario budget, while America sees a mix of inflation numbers, a $78B treasury refunding and a slew of Fedspeak.