Divergence in monetary policy has been in America’s favour ever since the Federal Reserve embarked on its current tightening cycle in 2015.  I say “current” cycle because, even if the Fed has stopped hiking rates (the jury is still out), it’s still rolling off its balance sheet, reverse-QE or QT, to the tune of $50 billion per month until at least September.  No other global central bank is in this position.  Now, after a brief hiatus, economic growth divergence may be back to the forefront.

The US economy enjoyed above par growth in 2018 due to President Trump’s tax cuts.  The US economy did slow from December to the end of February due to the government shutdown, the extreme winter weather, trade war uncertainty, and the tightening of financial conditions due to the swoon in equity prices in Q4 2018. However, recent evidence suggests that the slowdown in economic activity was what central bankers like to refer to it as “transitory”, while people on Main Street prefer to refer to it as a “blip”.  Last Thursday’s release of the retail sales report showed that retail sales surged by 1.6% in March, at the fastest pace since September 2017, after a disappointing -0.2% reading in February.  Also of note, the leading economic index increased 0.4% in March, the strongest since last September. The index rose just 0.1% in February and not at all in January.  The leading indicators confirm what other economic data shows – that growth has rebounded after a brief soft patch.  The data helped the USD to outpace every other currency except the yen last week.

As you can see from the Atlanta Fed’s GDP Now forecast, the first reading of Q1 was a meager 0.3%, but it steadily grew to 2.8% after Thursday’s stellar retail sales report.  This sets up Friday’s advance Q1 GDP report as a potential break-out event for the USD if the reading is anywhere close to 2.8%.

Speaking of divergence, last week’s strong US economic data stands in stark contrast to the economic performance of the Eurozone and Japan.  Last week’s flash PMI reading for the Eurozone were disappointing.  German and French manufacturing continued to contract.  For all of the Eurozone, the manufacturing PMI ticked up to 47.8 from 47.5, while the service PMI fell to 52.5 from 53.3.  Meanwhile, the Japanese economy continues to languish as the flash PMI nudged higher to 49.5 in April from 49.2 in March, its third straight month below the 50 boom/bust level. 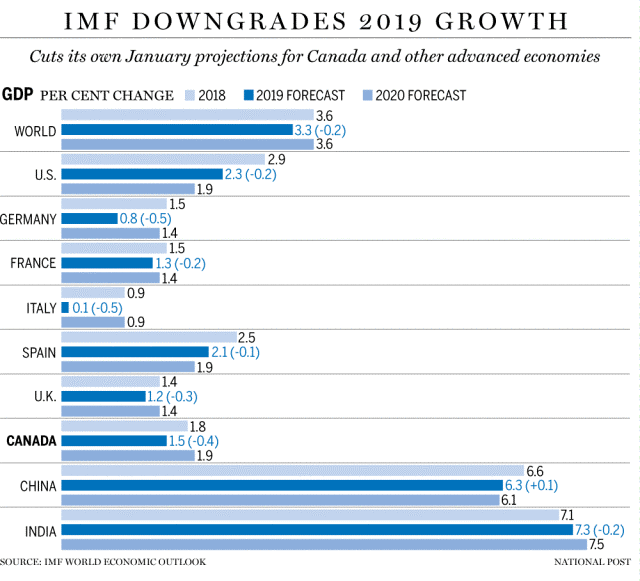 The improvement in US data reinforces my point on divergence: outside of China and India, the US economy is the cleanest dirty shirt in the laundry basket, and this may help the US dollar index to test key resistance at its 10-month high in the mid-97.00s.

Next week, central banks in Japan, Canada, and Sweden hold meetings.  The Bank of Japan would seem to have the least amount of ammunition left in their arsenal.  At last week’s G20 meeting in Washington, BOJ Governor Haruhiko Kuroda said he was ready to expand monetary stimulus if needed, but also said he had no plans to change the central bank's forward guidance.  For more than a year the BOJ has slowed the pace of bond purchases, and on Friday they announced that it would reduce the amount of long-term bonds it will purchase.  This sends a mixed message and sounds like a central bank backed into a corner, especially with a balance sheet that is already bigger than the country's economy and Japanese financial institutions suffering from the prolonged monetary easing.

The Bank of Canada releases interest rate decision and Monetary Policy Report this Wednesday.  The bank is in no position to raise interest rates (what central bank can, these days?)  At a press briefing at the G20 meeting in Washington last week, BOC Governor Stephen Poloz indicated he’s all but abandoned any bias for higher interest rates by commenting that investor expectations are consistent with rates being “on hold for a while”.  This is consistent with the recent dovish tilt in global monetary policy.  The move to neutral also reflects the recent mixed data points.  This week alone we saw the strongest retail sales growth since May 2018 with a 0.8% rise in February, as well as a somewhat disappointing trade deficit which saw non-oil exports falling to their lowest level in a year, with a 4% decline in February alone.  Despite the mixed data, the BOC may signal that the economy will be able to emerge from its current soft patch.   So, with the “rates on hold for a while” mantra taking shape, look for the BOC to eliminate previous references to increases in interest rates from this week’s policy statement.  With a current policy rate at 1.75%, the market is currently pricing an 18.9% chance of a rate cut in the next six months.