It was a big week for North America last week, and not just because the Washington Nationals (formerly the Montreal Expos) won their first-ever World Series of baseball.

Both the US Federal Reserve and the Bank of Canada had policy announcements just four hours apart on Wednesday. The Bank of Japan followed 24 hours later with its own policy announcement. There were also some key economic metrics for the US and China, and of course more trade war/deal news to digest.

Starting in Canada, the CAD was the only major currency that didn’t appreciate against the USD because of the Bank of Canada’s policy announcement, which Mr. Market framed as a dovish hold. The BOC, as expected, left interest rates unchanged at 1.75%. However, they did surprise the market by marking down growth rates for the next two years. The central bank said the “resilience of Canada’s economy will be increasingly tested”, and that they thought trade conflicts would likely cause business investments and exports to shrink in the second half of the year.

Canada’s economy rebounded in August after a lull in the prior month but as you can see below, the monthly GDP has been decelerating hence the BOC’s concern. 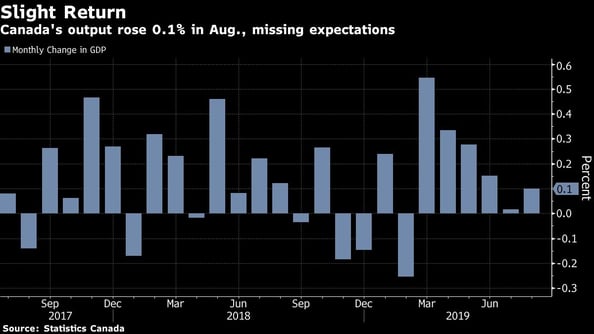 In the US, the Fed cut rates by a quarter point to 1.50% - 1.75%, as expected and for the third time in a row. Chairman Jerome Powell characterized the move as an insurance cut aimed at offsetting risks of softer global growth and uncertain trade developments. He also indicated it would take a 'material' negative shift in the outlook to spark another rate cut, i.e. a hawkish cut.

The trade weighted USD index took a hit on the cut due to Powell’s statement that it would take a “significant rise” in inflation to start raising interest rates.

Another significant piece of data is the US Q3 GDP, which slowed to 1.9% (its second slowest pace in the past 3 years). 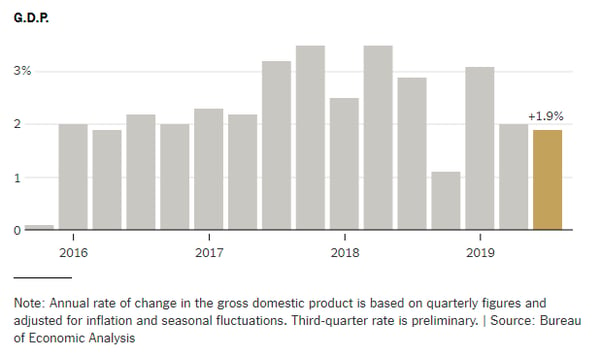 In Asia, the Bank of Japan acted as expected and left rates unchanged, but they did alter their forward guidance and lowered their growth forecast. According to BOJ Governor Kuroda, the global economic recovery will be delayed by a half year or more, and so they are actively considering more stimulus.

Bloomberg has reported that China is casting doubts about reaching a comprehensive long-term trade deal with the US, blaming Trump's “impulsive nature” and the risk that he may back out of even the limited deal that both sides are about to sign in the coming weeks. Chinese officials also warned that they won't budge on structural issues either, citing people familiar with the matter.

It is also worth noting that China is demanding an end to tariffs in order to begin any talks for "Phase Two". At least there’s a Phase One deal to cheer about, and the equity markets ran with this to set new record highs. Tread carefully though, since the graph below shows that the S&P 500 has diverged from corporate profits and history tells us that it is only a matter of time until a reversion to the mean occurs. 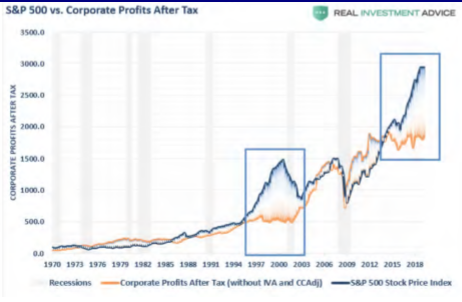 Chinese PMIs were a mixed bag. The manufacturing index fell from 49.8 in September to 48.3 in October while the non-manufacturing index fell from 53.7 to 52.8. That does not look promising.  However, the rival Caixin/Markit index, which represents China’s small factory activity, showed a different picture, rising to 51.7 from 51.3, its highest level since February 2017. More importantly, though, it registered its fourth consecutive monthly improvement.

Turning our attention to the Eurozone, the economy grew 0.2% in Q3, the same pace as in the previous period and slightly above market expectations of 0.1%. The GDP in the region is now up a meagre 1.1% y/y, the slowest in six years.

The Brexit saga continues as the EU granted the UK an official 3-month extension. The UK Parliament then promptly agreed to a December 12 general election in hopes that the people can add more clarity to the situation.

Just in case you are tired of hearing about Brexit, allow us to remind you that it is a two-step process. The current step is the divorce agreement, and once that has been finalized then the EU and UK will have to agree on how they will continue their trade relationship.

There is the week that was; now, let us look at what lies in the week ahead. In North America, while there are no major US economic reports next week, there are reports for Canadian trade, housing, and employment. These reports may show why the Bank of Canada changed its tune at last week’s meeting. Monday’s final Eurozone sector PMI could be interesting, if they are able to exit their run of sub-50 readings. Germany, the economic engine of the Eurozone, has some key data release (factory orders, industrial production, and trade) which may reinforce the ECB’s concerns about the region’s largest economy. Lastly, China’s export data and Caixin Services PMI will provide insight into the toll taken by the trade war.

There are also two central bank announcements on the docket. No changes are expected from the Bank of England and the Reserve Bank of Australia. The BOE will be happy that there will be no Brexit fallout to deal with for another three months, while the RBA will remain in the dovish camp with little chance of another cut this year.