Once again, the USD continued its rollercoaster ride in the currency markets, regaining all the ground lost last week.  We’ve seen this recently in the other direction but, possibly, this seesawing may be coming to an end.  There were some interesting developments in the week just past – let’s take a closer look.

The big news was in America, with the passing of the 2018 US budget by the Senate in a tight 51-49 vote, clearing the way for the House of Representatives to debate the proposed legislation.  If House Republicans can maintain discipline and avoid their usual internecine squabbling, the budget could be passed into law in short order and that will make the long-awaited reform of the US tax code a very real possibility as early as this year or early in 2018.  Broad-based tax cuts along with a sharp – and overdue - lowering of the US corporate tax rate are all tantalizing prospects, now possibly within reach.

In the True North, things were quite decidedly the opposite.  Aside from the finance minister, Bill Morneau, being embarrassed by recent revelations of undisclosed holdings of considerable value and having to be propped up by PM Justin Trudeau in a disastrous press conference, the ongoing NAFTA talks have proven to be dismal for Canada’s negociators and the domestic economy appears to be softening.  Although Canada’s September inflation numbers released last Friday were in line at +0.2% mth/mth, versus the call of +0.3% and up from the previous +0.1%, August Retail Sales proved to be a major disappointment, falling -0.3% versus the call of +0.5% and well down from the previous +0.4%.  Ex-autos was a complete disaster, falling -0.7% versus the call of +0.3% and the previous +0.2%.

This week sees a rate announcement from the Bank of Canada on Wednesday and, given the apparent weakness in the economy, it is highly unlikely the BOC will raise rates now and possibly not even at their next meeting – the latter a major negative for the loonie. Uncertainty over NAFTA, the unknown impact of new mortgage regulations on the Canadian housing market, especially in the key urban markets of Vancouver and Toronto and a possible desire to let a waxing USD make Canadian exporters more competitive – a sector previously noted as underperforming by the Bank – likely means a stand-pat attitude by the BOC for now.

On Thursday, the European Central Bank will be making a rate announcement which, market players anticipate, will finally provide some details on the ECB’s plans for their stimulus programme past its December expiration.  According to our learned colleagues Dr. Long and Mr. Short, it is highly doubtful the ECB will cut out monetary stimulus entirely but will likely effect a reduction in stimulus with an extension in duration, otherwise known as ‘tapering’. 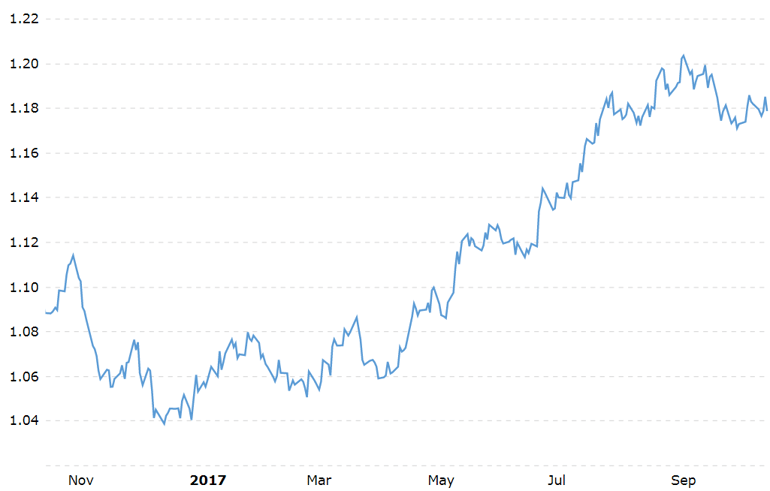 USD vs EUR – The trend is your friend

The EUR was basically unchanged last week against the greenback despite the latter’s strong upward move. As detailed last week, investors have great confidence in ECB chief Mario Draghi (KING DOLLAR DETHRONED, AGAIN Oct 16/2017) and we see no evidence of any loss of faith.

Sterling lost ground despite a strong uptick in domestic inflation to 3.0%, its highest level in 5 ½ years.  Bank of England Governor (and ex-pat Canadian) Mark Carney made some rather gloomy remarks about the ongoing Brexit negociations, which have reportedly stalled.  The prospect of a no-deal Brexit spooked market players, who sold GBP despite rising inflation and prospective rate hikes.  Regardless, the real head of the Eurozone – German Chancellor Angela Merkel – dismissed any speculation of Brexit talks being broken off.

The issue is absurdly complex, with both Germany and France pushing hard against a weakened British PM Theresa May, but Frau Merkel calls the shots.

The coming week sees, as previously mentioned, the Bank of Canada rate announcement, as well as numerous US economic releases