Once again, King Dollar left all other currencies behind.  The rally in the greenback appears to be accelerating following a spate of dollar-supportive and largely positive news developments last week.

The most obvious event was the Federal Reserve finally pulling the pin on rates, lifting the Fed Funds rate 25 basis points to a range of 0.50% - 0.75%.  The move had been widely anticipated for far too long but now that it’s done, the talk has moved to the timing and pace of future hikes.  Both the Fed’s dot plots (FOMC's Summary of Economic Projections) and Chair Yellen herself called the expectations for 3 instead of 2 rate hikes next year as a “modest adjustment”.

Mr. Market initially sold off both equities and bonds in response, but the correction lasted just a day or so.  The emerging view is that a rising equity market along with rising bond yields indicates not only that better economic times may be approaching, but that the time for ‘emergency’ low interest rates may have passed.  This would imply a return to normalcy as regards interest rates, corporate bond yields, mortgage rates and the like – something long overdue.  Not overnight, as much still depends on President-elect Donald Trump and his economic policies once he assumes office a little over a month from now, but investors evidently like what they have been hearing from Mr. Trump so far.  Certainly equity traders have been the most ‘exuberant’ – where have we heard that term before – setting several record closes in the Dow and, essentially, shrugging off the Fed rate hike.  In fact, with the Dow approaching 20,000, it could be argued that Fed rate hikes now constitute a bullish signal.

Despite the recent to-do over recounts, fake news and Russian hacking etc., Mr. Trump evidently has solid support in most of America, as the graph below, shaded for representation in the House, shows. 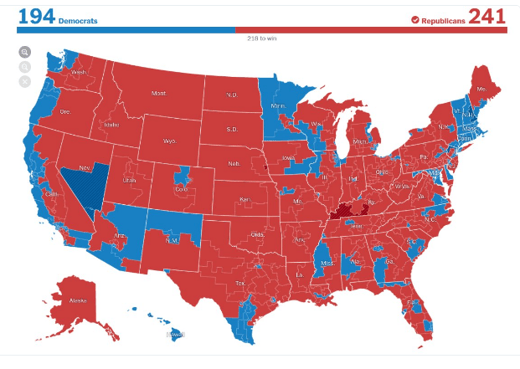 The bond market, as usual, spent its time scanning the sunny skies of market euphoria for some clouds however wispy and found them.  US Treasury bonds continued declining in price, with the bellwether 10-year notes touching 2.60% yield and 30-year notes trading up to 3.16%.  Rising bond yields in America will support the greenback and put pressure on other currencies, notably the EUR, CAD and JPY, whose central banks are still in the currency-depreciation business.  Even the Fed, in their statement following the rate hike last Wednesday, still sounded a cautious note on US growth going forward, with predictions clustered around the 2.0% level for 2017 to 2019.  Without doubt, Mr. Trump will be determined to top those estimates, or find himself a new cabinet.

Another victim of a rising dollar is oil.  Early last week WTI traded as high as $54 USD/bbl on the OPEC pricing agreement but, by week’s end, had faded to the low $50 range after briefly trading with a $49 handle.

The graph above shows oil’s erratic movements following the initial OPEC near-agreement, then a spike upwards following the official deal recently put together, then a fade as investors grew sceptical of the cartel’s discipline followed by a slight rally on a surprise Dept. of Energy supply drawdown report.  The Fed rate hike stopped the rally dead in its tracks, and crude has drifted back to levels seen in early December.  Regular readers of this newsletter are aware of our scepticism of OPEC and our belief that non-OPEC suppliers – American frackers, Canadian oilsands among others – have changed the oil market irrevocably. Recent developments haven’t changed this view.

AUD and NZD – Aussie and Kiwi – traded with a measure of uncertainty while the Chinese government held talks last week sketching out its economic strategy for the coming year.  As Australia and New Zealand are each other’s largest trading partner and China is each country’s largest outside trading partner, obviously these talks are of more than passing interest.  Recent protectionist rhetoric from Mr. Trump has spooked both Aussie and Kiwi, for any American tariffs on Chinese goods or any sort of trade impediments would work its way back to the Antipodes.

There was little of note from the UK, Eurozone or Japan, save that the ECB has been playing around with its QE programme and confusing traders about its intentions.  The euro has traded weaker against the USD and until the ECB clarifies its intentions the currency will likely continue losing ground. 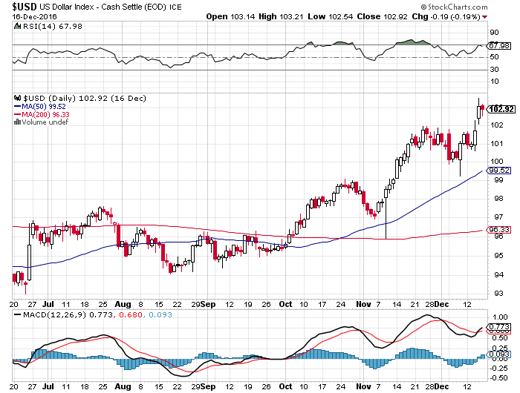 Next, let’s take another look at our favourite chart, the US Dollar Index (USDX), which is now trading at a 10-year high.  The cash rate had recently stumbled a bit, but the trend is still up.  However, the golden cross is still in place, with the 50 day moving average (in blue) again widening its lead over the 200 day moving average (in red).  At some point this cross has to hit a red signal or even (gasp!) an open switch, but for now it is clear track ahead for the greenback.

This will be our last newsletter of 2016.  To all our regular readers and valued clients, we wish Merry Christmas and All The Best in 2017.  The newsletter will resume in early January. 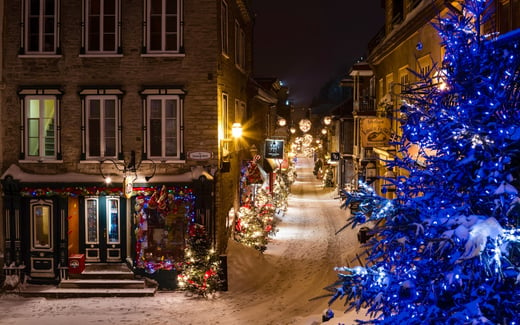