The USD turned in a mixed performance last week, falling against the European currencies but not against the yen and the commodity-sensitive currencies of Australia, New Zealand, and Canada.  The European currencies were spurred on by an outbreak of optimism after the first round of France’s presidential elections delivered an “Obama-like” golden boy.  The frontrunner in the presidential election runoff on May 7th is the centrist candidate Emmanuel Macron and he is up against the far right rival National Front’s Marine Le Pen.  The equity markets are not waiting for the final outcome as they have already summarized that Macron will win hence the impressive run higher in the Euro.

The Euro also received a boost from Friday’s Eurozone inflation data.  April’s inflation rebounded, with the annual rate climbing to 1.9% after taking a surprisingly large tumble in the previous month.  Core measure of inflation, which strips out changes for oil and food prices, also shot up, rising from 0.7% in March to 1.2%. That is its highest reading since 2013.  More importantly, inflation has picked up 11 out of past 12 months and now core readings are inching higher and inching closer to the central bank’s inflation target.  Thus, once the election is out of the way the ECB will be closer to signalling the tapering of monetary easing.  If this plays out then the euro could easily move to the overhead resistance at the 1.15 level.

With the Euro on the way up what does that mean for the USD?  The Euro makes up 57.6% of the US dollar index while the GBP and CHF have a weighting of 11.9% and 3.6%, respectively.  Since all three of those currencies did very well last week it’s not surprising that the US dollar index was down for the week. The price action left a gap.  If it is a normal gap then it should get filled rather shortly.  If, however, it is a break away gap then a move lower to the 97 area would be in store.

The key to the USD’s next move rests with the data.  While business and consumer confidence (soft data) has soared on President Trump’s election, the hard economic data hasn’t confirmed the optimism.  This can be seen in Friday’s Q1 GDP release, which limped along at a 0.7% pace.  This Friday’s April jobs report will either relieve anxieties or fuel worries that the economy is slowing.

The CAD was hit hard last week in the face of an uncertain trade outlook, troubles at Canada’s largest alternative (non-bank) mortgage lender, and domestic data that showed that the economy stumbled in February.

Last Tuesday, the United States said it would impose preliminary anti-subsidy duties averaging 20% on imports of Canadian softwood lumber.  On the same day, Trump put the Canadian dairy industry on notice with this tweet - “Canada has made business for our dairy farmers in Wisconsin and other border states very difficult. We will not stand for this. Watch!”  After this the rumours started that Trump was going to sign an executive order as soon as Saturday to exit the North American Free Trade Agreement (NAFTA).  Interestingly, neither lumber nor dairy are actually part of the current NAFTA.  By Thursday, Trump announced that after speaking to the leaders of both Canada and Mexico that he had changed his mind after both leaders asked for NAFTA to be renegotiated instead.  By the way, Trump conveniently did not mention that this was both Canada’s and Mexico’s position during the election campaign.  We guess with his 100th day in office fast approaching he needed to make a splash.

Suddenly, Trump is complaining less about China and Mexico, and more about the northern neighbour - not sure what to make of this.  Canada has a very small, maybe negligible annual surplus with the U.S. and in fact if you include services than the reality changes into a rather large deficit for Canada – perhaps Prime Minister Trudeau should tweet out the U.S. has treated Canada very unfairly, bigly!  Better still, Trudeau should tell Trump that he is building a privacy hedge on the border out of Canadian softwood and that Trump is paying for it (we couldn’t resist).  Strange how Trump hasn’t gone after China considering its massive trade surplus ($347 billion) with the U.S. – oh, that’s right there’s that slight problem that China finances the U.S. government by recycling its USD into Treasuries. 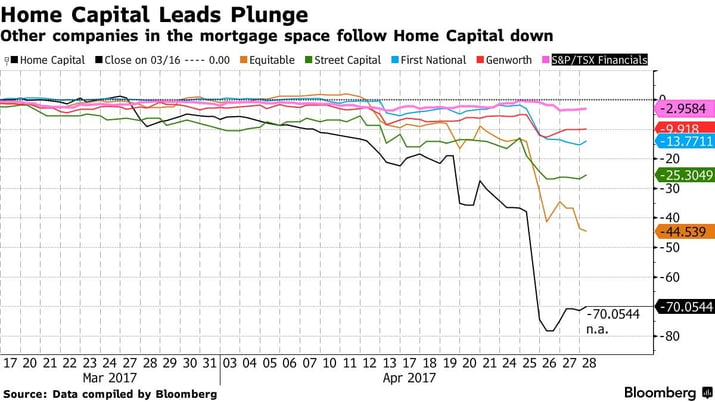 The other story that is weighing on the CAD was the implosion at mortgage lender Home Capital Group in what could be the first sign of trouble in Canada's runaway housing market.  HCG revealed that it had taken out an emergency $2 billion line of credit from an unnamed counterparty with an effective rate as high as 22.5%, the rate of interest alone tells you that this isn’t sustainable.  The problem began last week when the Ontario Securities Commission alleged that several company executives broke securities laws and misled shareholders in their handling of a scandal involving falsified documentation for a bunch of mortgages almost two years ago.  Contained or the canary in the coal mine.  The fear is that problems could spread to other fringes of the housing market and cause mortgage rates to rise for all Canadians.

How weak is the CAD – it wasn’t able to hold a one cent gain after the Trump NAFTA flip flop (i.e. also known as a classic negotiation ploy).  The CAD has fallen through the support line (blue) at 0.7350 which dates back to mid-November of last year.  The momentum indicators, highlighted in the red circles on the chart, have yet to show a turn.  Thus, the way is clear for a possible drop to the next layer of support (green line) at around 72 cents.  Keep in mind that the price of oil has also taken a hit over the last couple of weeks.  Crude fell nearly 8% last week alone.  Plus, according to the latest economic reading, Canada’s growth stalled at 0.0% in February.  Now that Trump made headlines, we can only hope that Canada has moved off his radar screen.  This doesn't mean the CAD will move higher, that will depend on oil and the health of the domestic economy. 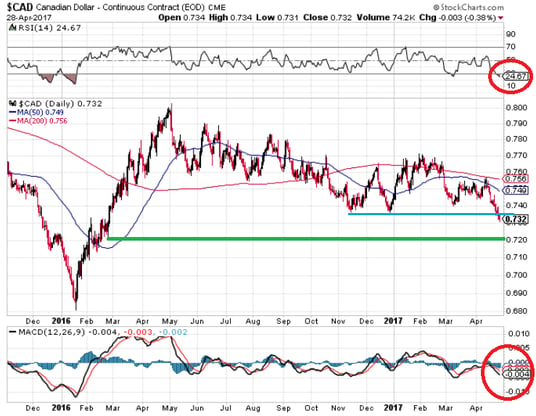