Oh No, Here We Go Again!

The GBP was the only currency that performed worse than the USD last week.  The pound was in a nice uptrend early in the week despite all three PMIs (manufacturing, construction, and services) missing their mark.  The turn in the currency came with the Bank of England’s cautious outlook during its policy meeting.  This was in stark contrast from the December meeting which had fanned expectations of a possible rate hike in 2017.  Even though the BOE upgraded its growth forecasts, the central bank demonstrated that it was in no rush to raise interest rates as they lowered their 2-year inflation forecast.

Meanwhile, the Yen was the top performer on the week as the Bank of Japan decided to stand pat at its policy meeting.  However, it was a different story at the end of the week as the BOJ announced plans to buy an unlimited amount of 5-10 year of JGBs in order to keep the interest rate anchored around zero.  This action was negative for the yen but weakness gave way to strength after the January US jobs data delivered a mixed bag.  While the number of jobs rose by its strongest amount in 4 months, wage growth slowed and the unemployment rate increased to 4.8%.  Market expectations for an interest rate hike in March fell to about 13.3% by way of the CME’s FedWatch Tool.  Also, a Reuters poll taken after the jobs data shows that Wall Street's top banks expect just two rate hikes from the Fed this year - all 14 respondents predicted the Fed would leave rates unchanged at its next meeting in mid-March.  The poll matched the outcome of the FOMC meeting earlier in the week, which offered little hope of any accelerated pace of rate hikes.  In the statement, the Fed reiterated, “The Committee expects that economic conditions will evolve in a manner that will warrant only gradual increases in the federal funds rate; the federal funds rate is likely to remain, for some time, below levels that are expected to prevail in the longer run.”

The title of this week’s Dispatch “Oh No, Here We Go Again” – reminds us of the 1982 classic rock hit Here I Go Again by Whitesnake.  We think it’s apropos as regardes two themes that have managed to work themselves back into the spotlight after a couple of years off the front pages.  We are talking, of course,  about a rerun of the summer of 2015 Greece solvency woes and the resumption of the currency wars of 2010-2014.

Greece is on the verge of collapse again.  Yields on Greek bonds have surged after it failed to achieve a positive review at the Eurogroup meeting on January 26th.  It’s the same problem as before:  Greece does not have the funds to pay their bills, and they have only completed a third of the reforms agreed upon to receive the next tranche of aid to pay their bills.  This explanation alone tells you that the situation isn’t sustainable.  In fact, the IMF still views the Greek debt as unsustainable without further measures from the Greek government, along with additional debt relief clarifications from European creditors.

This means that we will all have to reacquaint ourselves with peripheral European bond spreads – the spreads between the bonds of different countries that share the same currency. The mere fact that they are moving will fan speculation of a euro breakup at the most inopportune time, especially with national elections in the Netherlands and France in the next couple of months with Trump-like populist movements led by Wilders and Le Pen, respectively, will not provide a favourable environment for concessions.

It looks like Peter Navarro, President Trump’s top trade advisor, drew first blood in the resumption of the currency wars.  Last Tuesday, he indirectly warned that a currency/trade war with Europe may be on the horizon, after he told the Financial Times that Germany is using a “grossly undervalued” euro as an “implicit Deutsche Mark”, whose low valuation gives Germany "an advantage over its main partners".  A couple hours later, President Trump was speaking about pharmaceutical prices and then went on a tangent about currencies.  Here is what he said:  "A lot of the companies have moved out, they don't make the drugs in our country anymore. A lot of it has to do with regulation, a lot of it has to do with other countries take advantage of us with their money and their money supply and devaluation. Our country has been run so badly, we know nothing about devaluation; every other country lives on devaluation. You look at what China's doing, you look at what Japan has done over the years, they played the money market, they played the devaluation market and we sit there like a bunch of dummies, so you have to get your companies back here." 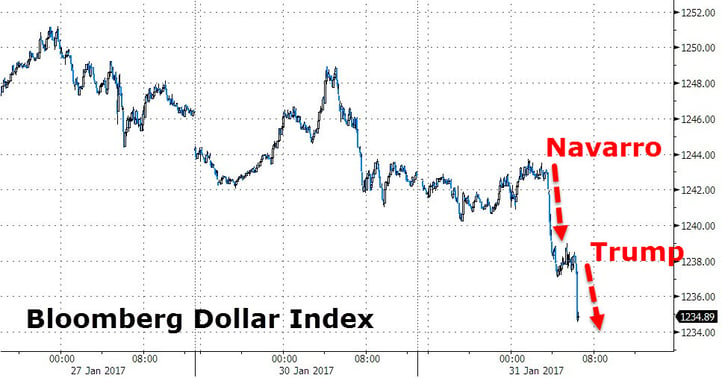 So there you have it, as of Tuesday January 31st 2017 the currency war is back on.  It would also appear that America's “strong dollar policy”, which had been in place since 1995 under then-Treasury Secretary Robert Rubin, is no more.  We shouldn’t be surprised as, after the election and prior to the inauguration, Trump himself and several of his officials had made remarks about the dollar and countries devaluing their currencies to gain an unfair trade advantage.  This week’s comments seem to make it official now that he is in office.  With this in mind, what country is next?  So far the administration has targeted countries with the largest trade deficits with the US. Thus, South Korea may be the next target.

We will have to adjust to the style of the new President.  Past Presidents never tweeted let alone commented on the currency.  In our profession, we expect volatility around the timing of economic events that we share with you at the end of each Dispatch in the key data releases for the upcoming week.  Unfortunately, with this President, managing volatility will be more challenging. Thus, with a cautious Fed, slightly disappointing jobs data, and an unpredictable Trump administration the correction in the USD that was looking close to ending last week may, in fact, morph into a more significant correction.