Last week witnessed a deluge of economic developments both in America and elsewhere.  Employment statistics in North America, central bank pronouncements, growth rates, US tax reform – all manner of news for market players to digest.  Additionally, there were political developments in America involving high-profile arrests and the release of brazenly revealing political insider memoirs, all of which should prove interesting in the near future but, as their impact on markets appears muted at present, we will leave it to others more versed in these issues to analyse them.  Instead, let’s take a closer look at these other, more relevant, economic developments.

Let’s begin with America.  The Federal Reserve made its scheduled rate announcement last Wednesday, leaving the overnight Fed Funds rate unchanged as was widely expected.  However, the accompanying statement was a touch hawkish, as the Fed upgraded its outlook for the US economic growth from moderate to solid.  Once again, our learned colleagues Dr. Long and Mr. Short worked through the Fed’s opaque verbiage and gleaned the following salient points:


Nothing in this statement has dissuaded investors away from the view that the Fed is on course to raise rates one more time this year, at their last meeting of 2017 next month 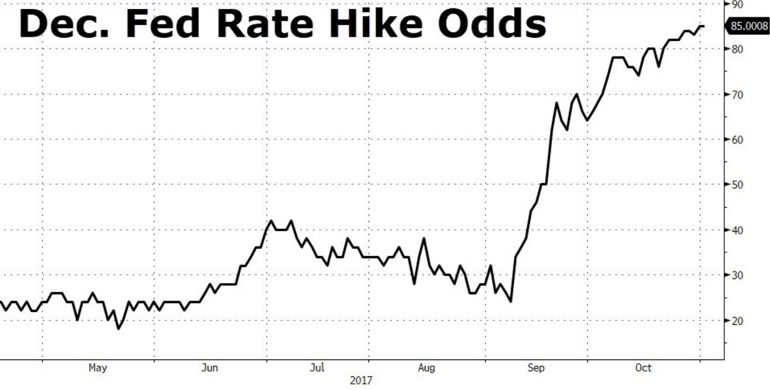 In a move at the top of the Fed, outgoing chair Janet Yellen has been replaced by FOMC member Jerome ‘Jay’ Powell.  His outlook is virtually identical to that of Ms Yellen – cautious, erring on the side of easing, consensus-seeking – so investors anticipate continuity in the near-term.

Widely watched US labour market statistics were released last Friday and, while not bad on balance, the numbers were indeed rather mixed.  Total jobs created were reported at +261K vs call of +310K; the jobless rate fell to 4.1% vs call of 4.2%; hourly earnings were flat vs call +0.2% - all largely disappointing.  However, the net revision of both August and September jobs was +90K jobs, which is a very positive development and implies possible upward revisions in last Friday’s numbers.

The deal now with the USD is that Mr. Market expects a rate hike in December, so that a hike at that time will be largely discounted, whereas if the Fed fails to hike the overnight rate, the USD will take a hit. 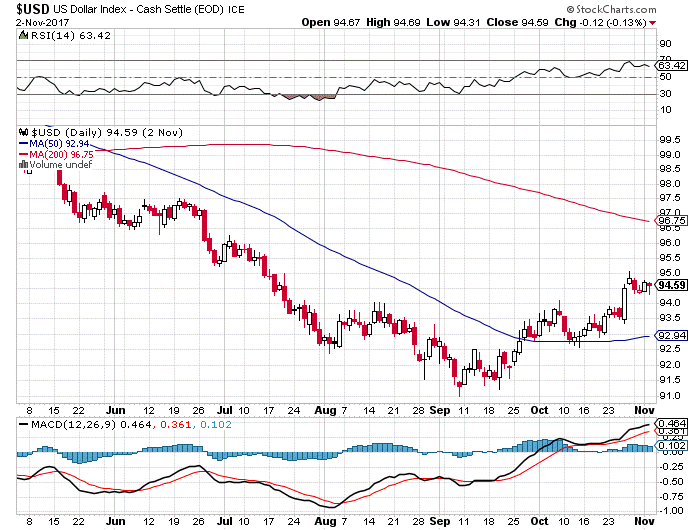 Lastly, the Trump administration announced a wide-ranging series of tax reform proposals designed to, inter alia, reduce personal and corporate taxes and encourage the return stateside of company retained earnings lodged overseas.  While investors welcomed the announcement, most are realistic enough - or cynical enough – to realise that it will be quite some time until these reforms are enacted, if at all.  But a start, at least, has been made on reform and, along with a steady labour market, growth in the +3.0% range and rising interest rates, the outlook for the USD looks good.

In the True North, the October Labour Force Survey demonstrated continued strength in Canada’s labour markets.  Total jobs created were up +35.3K, easily beating the average call of +15K. Even better was the breakdown: Full-time +88.7K, Part-time -53.4K.  The unemployment rate rose to 6.3% vs call of 6.2%, as discouraged workers resumed their job search – another good sign.  Over the past six months, full-time employment has increased by almost 39K jobs monthly, and the higher wages associated with such jobs explains much of the strength in Canadian GDP seen earlier this year.

Earlier in the week, August GDP was reported down -0.1% vs call of 0.1%, and below July’s 0.0%.  While the Bank of Canada will certainly be pleased with the recent jobs reports, still the nagging weakness in recent GDP numbers will likely cause the Bank to stand pat at their next rate meeting.  Of likely concern to the Bank are faltering NAFTA talks, a coming major housing price correction and seesawing oil prices.  Governor Stephen Poloz will be speaking this week and may give an updated report on the Bank’s current view.

Elsewhere, not much to report from either the Eurozone or the Far East.  In the UK, the Bank of England raised rates for the first time in almost ten years, by a quarter-point to 0.50%. The vote of the Monetary Policy Committee (MPC) was 7-2 in favour.  Surprisingly, though, bond yields declined and sterling took a hit as Mr. Market focused on what was perceived as a dovish bias in the MPC’s accompanying statement.  Additionally, the effects of the looming Brexit breakup are still a major unknown and are casting a long shadow on the UK economic outlook.