Out of the Blue

In a week dominated by concerns over the stumbling US-China trade talks, stellar employment numbers released by Canada stood out as a piece of remarkably good news. There were other developments of interest as well, so let’s take a closer look.

The Following last month’s dovish remarks by the Bank of Canada, negative growth in the most recent monthly GDP numbers, and a loss of 7.2K jobs in March, most analysts had expected lacklustre job growth in April. The consensus was an estimate of about +15.0K jobs, with the unemployment rate steady at 5.8%.  In actuality, the Canadian economy created an astonishing +106.5K jobs last month, with the jobless rate dropping to 5.7% (see graph below). To put this in perspective, this is equivalent to the US economy generating 900K jobs in a single month, which would be unheard of.  Specifically, Canada added +73.0K in full-time jobs and +33.5K part-time jobs.  Our learned colleagues Dr. Long and Mr. Short were as surprised as anyone, and they postulate that the strong growth recently witnessed in America (Q1 GDP +3.2%) may be spilling over into Canada as well. Historically this has been the case, so perhaps these jobs numbers aren’t that surprising after all? At any rate, these developments call into question the BoC’s recent dovish stance and, not surprisingly, Mr. Market bought the loonie with a vengeance. 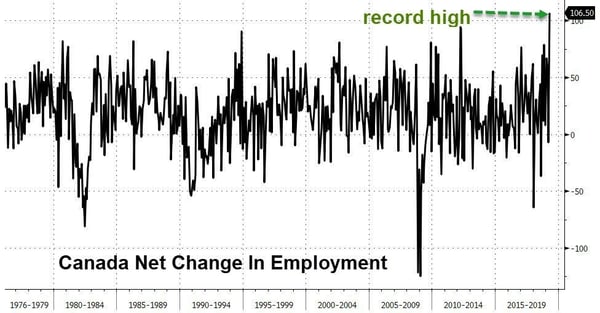 Conversely, Canada’s trade gap continues to widen: a troubling development and the likely cause of the recent slippage in GDP. The deficit for March was 3.2 bil. CAD vs the projected -2.4 bil. CAD. The previous month was revised to be wider than originally thought, from -2.9 bil. to -3.4 bil. All of this implies a weak export sector, so who’s doing all the hiring?

In the US, the strong economy continues to create jobs at a steady pace. The Bureau of Labor Statistics (BLS) released the March Job Openings & Labor Turnover Survey (JOLTS) following a record number in January and a somewhat slower February report. The BLS revised the February job openings number from 7.087 mil. to 7.142 mil., while in the March report openings increased by 346K to an astounding 7.488 mil., the fourth highest on record.

Bottom line: Both the Canadian and US economies are creating jobs and appear to be moving into sync (finally). This stands in stark contrast to the rest of the world, especially Europe. 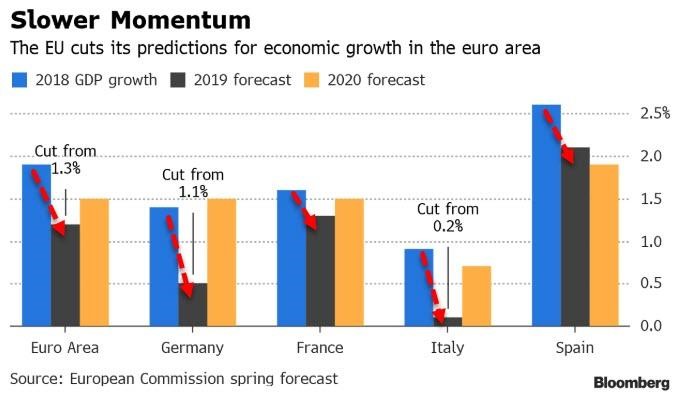 While growth appears to be accelerating in America, and perhaps in Canada very soon, it is quite a different story in the Eurozone. The European Commission (EC) cut 2019 forecasts of zone growth from +1.3% to +1.2%, and quite notably cut expected German growth from +1.1% to +0.5% (!). A weak German economy is unpleasant news for the bureaucrats and politicians running the zone, and a whole host of reasons (or excuses) were proffered: the unresolved BREXIT situation; stalled US-China trade negotiations; a possible escalation of global trade tensions; sluggish overseas markets, etc. The EURO held largely steady on this news, while German 10-year bonds rallied into negative yield territory.

Lastly, where do we currently stand on the US-China trade talks?  As is typical with political issues, sorting out the signal from the noise can be a daunting task. We spoke once again with our colleagues Dr. Long and Mr. Short, and they made clear that (despite all the bluster) both sides need a deal. It’s not hard to see why: President Xi Jinping needs to keep factories going full-tilt and the port of Shanghai buried in exports. The mass of Chinese workers must be gainfully employed, or the risk of “social disorder” rises.  Mr. Xi must satisfy party hardliners as well as his own domestic critics, so he has an incentive. As does Mr. Trump, although he is sitting on access to the prized US market, the only economy which appears to be growing strongly at present. A trade war would hurt American interests overseas and should generally be avoided; we think both sides appreciate this fact. The trick is to extract the maximum concessions before signing on. Despite increased tariffs coming into effect last Friday, the “goods in transit” buffer in the application of higher tariffs means there is still time, a few weeks at most, for both sides to come to an agreement before the tariffs really bite.

The coming week will see a mix of secondary economic numbers in both China and the US, with the always-interesting US Retail Sales report being released Wednesday. There will be daily Fedspeak as well, with several regional Fed presidents slated to hold forth on the economy.