Although we have fond memories of rocker Carole Pope and her new wave band, Rough Trade, the reality is that rough trading dominated markets last week, with a singular lack of economic news – excepting Canada - and a little too much politics, again. Take a closer look, shall we?

We’ll start with the True North. Traders have been steadily marking down the beaverbuck on growing scepticism of a July rate hike by the Bank of Canada. Prior to the recent G7 kerfuffle, odds had been around 80/20 for an increase, but that had been shaved to 65/35 and, following exceptionally weak Retail Sales and soft inflation numbers, odds are now likely lower still. April sales were disastrous, dropping -1.2% vs the call of 0.0% and well down from the previous +0.6%. Even ex-autos were soft, coming in at -0.1% vs the call of +0.3% but still up, a bit, from the previous -0.2%. CPI came in at +2.2% yr/yr, well below the call of +2.6% but did match the prior month. 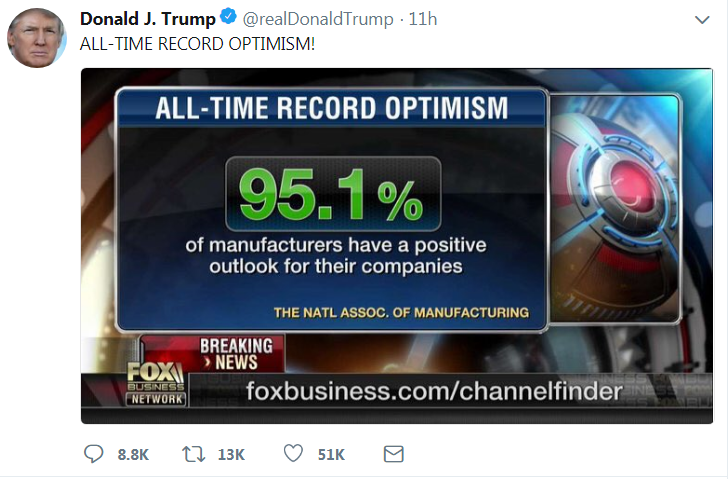 By contrast, the Canadian government appears to be losing control, having badly fumbled the Kinder Morgan pipeline project and unwisely picking a trade fight – for partisan gain - with Mr. Trump at the recent G7 meeting. Is the Canadian auto sector next in Mr. Trump’s sights? Say it ain’t so!

The US economy is looking very good. Economic growth is increasing, jobs are (somewhat) plentiful, inflation looks set to rise, jobless claims continue at 50-year lows – what’s not to like? Fed chairman Jerome Powell – in the usual roundabout manner of central bankers – implied two more rate hikes in 2018 and possibly several more in 2019. To the extent that the Bank of Canada does not match (or trails) rate hikes by the Fed, CAD will suffer.

The Eurozone was riven by internecine bickering between zone paymaster Germany and No. 3 Italy and other smaller states over the issue of open borders and refugees. The installation of a centre-right, populist coalition in Italy was bad enough; that two Eurosceptic lawmakers were appointed to key economic posts in the new government, thus reviving concerns over Italian debt and loyalty to the EUR was worse; that the Italian government actually defied Germany on acceptance of refugees was far worse.  Zone political boss Chancellor Angela Merkel of Germany, long used to getting her own way, now faces opposition from outside and even from her own coalition partners

Acting interior minister Horst Seehofer, head of one of the government coalition parties, has come out against the blanket acceptance of Middle East refugees. Should he be fired by Ms. Merkel for insubordination, the whole government coalition might collapse.   To forestall this, meetings were scheduled for this past weekend to discuss the refugee issue. Political upheaval in Germany clearly would not be a positive for the EUR.

Sterling picked up ground after an unexpectedly hawkish rate decision by the Bank of England. The dove/hawk split was forecast at 7-2; it came in at 6-3. 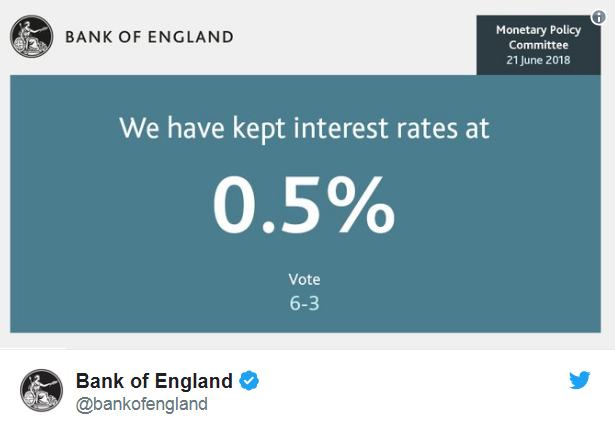 BoE Chief Economist Haldane, previously a dove, cast in his lot with the hawks. Upwardly revised economic estimates likely persuaded him to move and Mr. Market wasted no time, buying up GBP in anticipation of rising rates in the near future.

On a sad note, General Electric Corp., which started life as Edison General Electric long ago, was removed from the DJIA last week following the company’s recent difficulties. It was, in fact, the very last of the original group of US companies used by Charles Dow to compute his widely-watched share price average.

OPEC members met in Vienna last week to consider the state the cartel, production quotas, who’s in, who’s out and so on. As befits his role as Tweeter-in-chief, President Trump made his feelings clear:

Almost on cue, as if further evidence was needed of the influence of social media:

The coming week sees, once again, a near-absence of Canadian economic metrics while America sees a large number of releases along with several Fed speakers.