The Art of Illusion

Last weekend was the 50th anniversary of man’s first moon landing.  That’s a long time and a very important event in humanity unlike the 12 plus years of the Kardashians on TV which is still painful and a black eye on humanity, in my humble opinion – oh, I demur.  Believe it or not, but some folks actually believe that the lunar landing was an illusion or hoax.  These may be the same people that believe the earth is flat, can’t say for certain, but more than likely.  By the way, while on the subject of the moon and bad TV, LEGO recently commissioned a poll asking hundreds of children, aged 8 - 12, in the United States, United Kingdom, and China about their interests in outer space and what they want to be when they grow up.  Turns out 56% of Chinese kids want to be astronauts while most American and UK kids want to be YouTubers.  Oh my, this can’t be good.   Let’s have a look at the illusions that I see in the market nowadays. 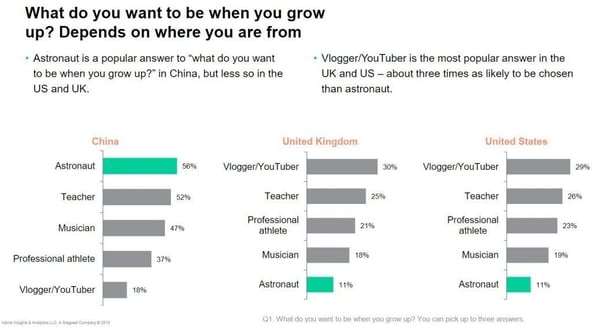 The NZD was the top performer last week on a combination of firm domestic inflation data, a positive weekly dairy auction (with prices up 2.7%), and an expectation that the Federal Reserve will cut interest rates at the end of the month.  On the flip side, the GBP was worst performer of the week, despite outstanding economic data points.  Last week we saw the strongest rise in wages in over a decade (3.6%) and June retail sales jump by 0.9% but the GBP didn’t care as it set new 2019 lows due to increased fears of a (no-deal) hard Brexit.

Did you know that Harry Houdini, the Hungarian-born American illusionist and stunt performer, died on Halloween in 1926?  Did you also know that the Brexit deadline is on Halloween of this year?  Why do I bring this up – because both Jeremy Hunt and Boris Johnson (the two men that will be crowned the next UK Prime Minister next week) are under the illusion that they can bluff their way to a better Brexit deal with the EU by bluffing an even harder Brexit that was envisioned.  This one would include dropping the backstop which would require the UK to discard the Good Friday Agreement between the two Irelands.

On the daily chart, last week’s price action caused the GBP to fall through the first support line.  It did manage to bounce off the second support line but was unable to breach the blue trend line at around the 1.2580 level.  This tells us to expect further downside action.  Deutsche Bank now puts the odds of a hard Brexit at 50% which is a significant risk and many other banks project that if the UK leaves the EU without an agreement, the GBP could quickly sink to the 1.15 level.

The other illusion in the markets right now is the notion that the trade truce between China and the USA will lead to a trade deal.  Frustrated by the lack of progress on a comprehensive trade deal, President Trump reiterated that he could impose additional tariffs on Chinese imports if he wants, after agreeing to a tariff truce with China’s President Xi Jinping last month at the G20.  According to Trump, he agreed to the truce because Xi had agreed to buy large amounts of US agricultural products.  China, on the other hand, believes that they would only follow through on the agricultural imports in exchange for the granting of licenses to US companies to sell products to Huawei.  In response to Trump threat, Foreign Ministry spokesman Geng Shuang told reporters in Beijing that “if the US imposes new tariffs, this would create a new obstacle for US and China trade negotiations and would make the road to coming to an agreement longer”.  So there you have it, Trump’s Art of a Deal has become the Art of Wait and See.

With US stocks setting new record highs during the week, I’m reminded of yet another illusion - the stock market acts like we have an economic boom on our hands.  More and more data is indicating that we are at the beginning of an economic contraction and the inverted yield curve certainly speaks to this point.  Case in point, last week we had two data points that reinforces this view.  The Cass Freight Index for June fell 5.3% and marked the 7th straight month of declines.  According to Donald Broughton, founder and managing partner of Broughton Capital, a deep-data driven quantimental economic and equity research firm, the shipments index has gone from “warning of a potential slowdown” to “signaling an economic contraction."

The leading economic index fell 0.3% in June to mark the biggest decline in three years.  Ataman Ozyildirim, Senior Director of Economic Research at The Conference Board said "For the first time since late 2007, the yield spread made a small negative contribution. As the US economy enters its eleventh year of expansion, the longest in US history, the LEI suggests growth is likely to remain slow in the second half of the year."  As I’ve mentioned before, we are in the late innings of this business cycle. 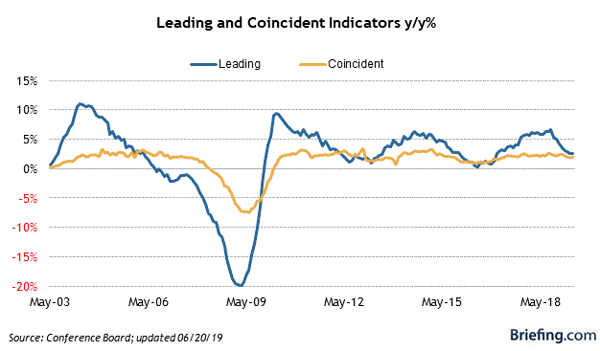 In the week ahead we will see the first estimate of US Q2 GDP, German IFO Business Climate Index, Eurozone flash PMIs, ECB monetary meeting, and a new Prime Minister in the UK.  Of these, the ECB decision is the most intriguing.  There is no question as to if the central bank should ease but rather the issue is when.  Late Friday evening, there was a report by German news magazine Der Spiegel, citing central bank sources that ECB President Mario Draghi plans to restart purchases of government bonds by November to support the fragile Eurozone economy.  The derivatives market suggests that there is a 50% chance of an interest rate cut this week or a 50% of a cut at the following meeting in September.

The intrigue for me lies in the optics of the decision.  With a 100% probability of a Fed rate cut at the end of this month, game theory would suggest that the ECB get out ahead of that move by cutting this week in order to stop the euro from rising against the USD after the Fed decision.  If this were to happen, then Treasury Secretary Mnuchin's comments last Thursday that there was no change in the country’s currency policy "for now" would be front and centre.   I’m sure President Trump would probably tweet about it, inciting manipulation and currency wars.  Can’t wait.