Some scientists are calling it a “thermonuclear pandemic” (quite a terrifying piece of vocabulary in today’s hyper-connected world), but it remains to be seen if the new coronavirus will live up to the name. Be that as it may, the SARS-like outbreak in China was the catalyst for last week’s risk-averse financial markets. In 2003, SARS panic shaved 2% off China’s growth rate. 17 years later, fears are manifesting the currency markets through safe-haven flows into the Japanese yen and out of hard commodity currencies such as the Canadian or Australian dollar.

The outbreak coincided with the lead-up to Chinese Lunar New Year, which involves the largest travel day in China, as well as many public gatherings and celebrations. Since human travel is the last thing you need during a viral outbreak, China proceeded to lockdown 12 cities, restricting the movement of 33 million people. As of this writing, the coronavirus has killed 80 people, infected nearly 1,300 people, and has spread to at least 10 countries outside China (including the United States and Canada). During SARS, it took at least four months for officials to institute quarantine measures. This time the Chinese government has acted swiftly; hopefully, that will be enough.

Meanwhile, the GBP was the second-best performing currency last week as fresh economic data helped reduce the chances of a rate cut at this week’s upcoming policy meeting. Both Manufacturing and Services Flash PMIs were better than expected, with the manufacturing printing at 49.8 versus 48.9 forecast while services rose to 52.9 versus a forecast of 51. Furthermore, the January data from the IHS Markit / CIPS Flash UK Composite PMI® underscored a decisive change of direction for the private sector economy at the start of this new year. The realization that the Brexit saga is over helped business activity expand for the first time in five months, driven by the sharpest increase in new work since September 2018. This string of positive data has helped Mr. Market to scale down its rate cut bets from about 70% prior to the data’s release to around 50% at the start of this week. 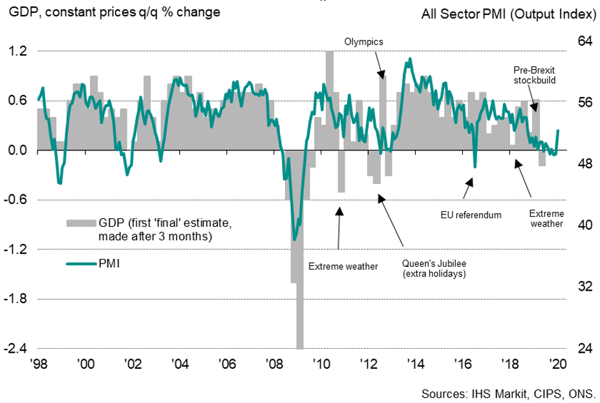 Going into 2020, we had only two central banks on our radar to potentially cut interest rates in H1 2020: the Bank of England and the Bank of Canada. The Bank of England may cut rates as early as this week when it meets on Thursday, Governor Mark Carney’s last meeting before he hands over the keys to Andrew Baily. As we mentioned above, last week’s flash PMI has dropped the odds of a rate cut to 50/50. It’s a close call, and it may not happen this week, but a better bet is that they will cut before the Bank of Canada does.

Speaking of the Bank of Canada, they held their policy meeting last Wednesday and kept their key interest rate target on hold at 1.75% while forecasting a slower-than-expected start for the Canadian economy for 2020. The BOC had been one of the few central banks to resist the global push toward easier monetary policy last year, but Governor Stephen Poloz may have signaled a change.

“I’m not saying that the door is not open to an interest rate cut. Obviously, it is, it is open […] if the current economic slowdown persists,” he said, speaking to reporters after the rate decision. With that, the BOC is officially on the neutral-to-dovish flank. 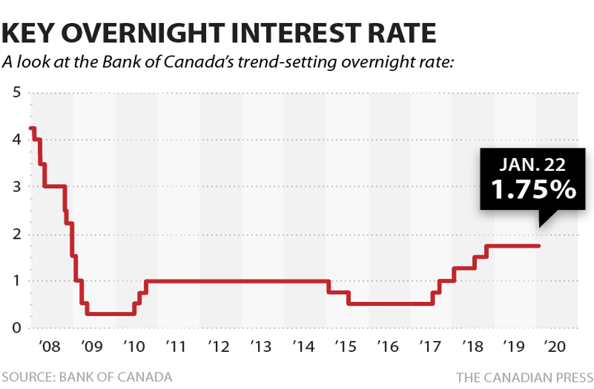 Headlines on the coronavirus will continue to dominate the newsreel in the week ahead. Data-wise, US Q4 GDP, Eurozone January CPI, Chinese PMIs, and Japan December Retail sales will be of interest. The Chinese PMI reports after the Lunar New Year are notoriously fraught with irregularities, so they will not offer clear evidence of trade deal data or fallout from the outbreak. Japan’s retail sales report is of most interest because it will show how the consumer has rebounded from the sales tax increase and the typhoons.

As we mentioned above, the Bank of England could surprise the markets with a rate cut this Thursday. The other central bank meeting this week is the US Federal Reserve. The Fed is expected to stand pat, so the only potential surprise would be if Chairmen Jerome Powell communicates something in the post meeting press conference (something he has prone to do in the past).

Lastly, after three and half years, Brexit finally happens this Friday. This will be strictly ceremonial, as the UK and the Eurozone will continue to use the same rules that govern their current relationship until the end of 2020. The rest of the year will be used to negotiate the new arrangement.