The tone for the week was set on Wednesday morning when the Trump Administration once again rocked financial markets by proposing another set of tariffs on $200bn worth of goods from China, amplifying a rapidly escalating trade war. Initially, the news drove risk aversion with the Yen surging as traders worried that the escalation in trade tensions could lead to a global trade war that would stifle growth, but by noon risk aversion petered out and the major currencies recovered most of their losses.

The action in the currency markets, like in most trading situations, displayed the classic Wild West expression – shoot first, ask questions later.  There were a couple of questions/reasons for the reversal of the initial response.  First and foremost, was the fact that the announcement was simply a proposal rather than policy with the final decisions to be taken not until the end of August.  Secondly, Mr. Market recognized that the proposal fit President Trump’s MO of “raising the ante” negotiating style.  Lastly, the list of products that the new tariffs would apply to demonstrated that the fallout would be minimal – the list of goods did not include items like cell phones, tablets, and personal computers but did include LNG (liquefied natural gas).  Guess how much LNG the US imports from China – zero. 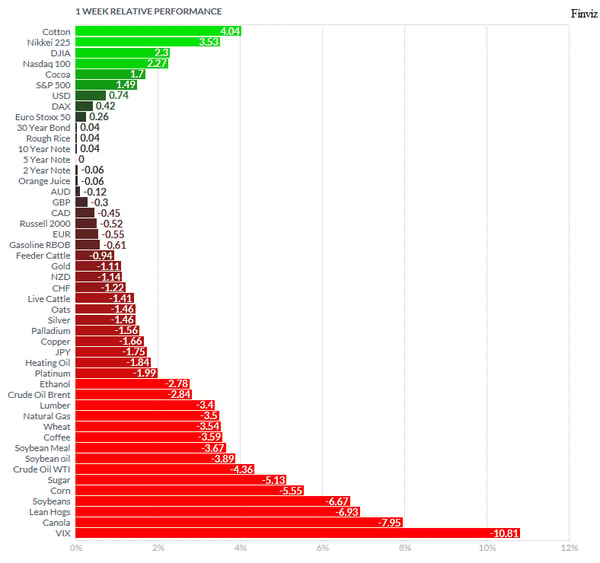 While the currency market was able to shrug off the escalating trade wars fears the commodity markets wasn’t as resilient.  The anxiety over global demand, fuelled by an escalating trade war, sparked an avalanche of selling in the commodity complex, as concern continues to grow among market participants that the trade war will affect the real economy and put the brakes on global economic growth.  Only cotton, cocoa, and rice were able to post gains on the week. The losses in the commodity sector was the biggest one day drop since November 2014.  If commodity deflation continues, alongside more highs in the USD, the Fed may have to alter its plan to hike rates another 7 or 8 times before it has to stop and reverse course

Still on Wednesday, speaking of the Fed’s interest rate path, Chicago Fed President Charles Evans, a noted dove, said he now supported more tightening this year. "The economy seems so strong it seems natural that businesses and consumers can live with" slightly higher rates, Evans said, in an interview with the Wall Street Journal.  He said whether the Fed raised rates one or two more times this year was not very important in the overall picture.  Also on Wednesday, the producer price index for final demand climbed 0.3% last month after rising 0.5% in May. In the 12 months through June, the PPI advanced 3.4%, the largest gain since November 2011. Sales at wholesalers accelerated 2.5% in May, the biggest increase since March 2011, after rising 1.4% in April.

Evans’ hawkish remarks, coupled with inflationary data at the wholesale and producer level, helped pace the USD to a strong weekly performance and it may be ready to move higher out of its consolidative mode.  The black resistance line on the weekly chart of the US dollar index, marking the potential double top, needs to be overcome in order to send it off to the next target just a little below the 98 level.  The technical indicators on the daily chart are getting ready to confirm another move higher which should break through the resistance. 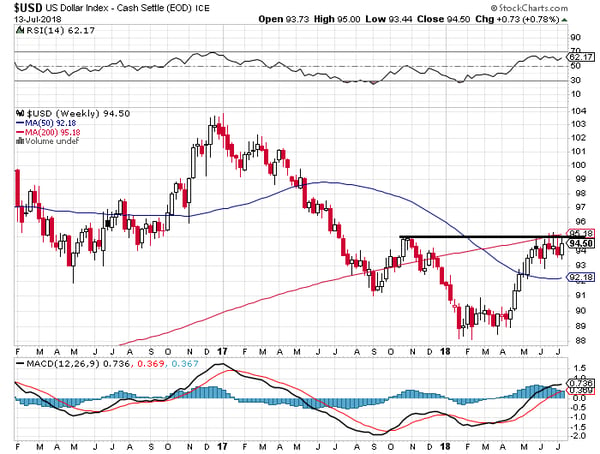 Wednesday's other big news was the Bank of Canada announcement.  The BOC raised its benchmark interest rate to 1.5% up from 1.25%, its first move in six months.  When it comes to central bank moves, the Fed gets all the headlines but many would be surprised to learn that this hike was the BOC’s fourth increase over the last 12 months and the first time the rate has been this high since December 2008. The BOC revised up its growth forecast for Canada’s biggest trading partner, the US, despite the tariffs, counter-tariffs and other trade tensions, which the bank judged to be modest.  BOC stated that the Canada's housing market has stabilized, and the terms of trade have improved.  All of these factors reinforced the prospect of further tightening by the central bank.  The initial reaction was positive and the CAD surged higher.  However, that didn’t last and, an hour later, the CAD was lower than the preannouncement level due to the USD’s broad-based gains and by the rather large drop in crude.

Ironically, what should have been a banner day for the CAD was all for naught as the currency was undercut by the performance of Canada’s biggest export, crude oil.  The price of oil suffered its biggest single-day loss in two years (5% for WTI and 7% for Brent crude), dragged down by increased OPEC output and resumption in Libyan production.  This was surprising because there was a massive 12.6 million barrel draw down in US oil inventory – but oil barely climbed and that was a signal for the bulls to head for the exits. Oil got caught up in the commodity carnage that ensued after the revving up of trade tensions.

For now the currency market has taken the tariffs in stride.  Having said that, this could change if China responds with heavy non-tariff measures – call and raise!