The USD hobbled to the finish line last week as the 180 degrees transformation of Trump the candidate to Trump the President weighed on the currency, as well as another round of lackluster hard data.  The benefactor of this was the Japanese yen, which finally gave up the 110 handle.  The USD finished the week below its 200-day moving average against the yen for the first time, fortuitously or not, since the US election of President Trump.  The yen’s gains were two fold – it rose due to heightened geopolitical risk aversion from Syria and North Korea and the growing skepticism about Trump’s ability to carry out his election promises.

Voters have come to expect that candidates will not be able to convert all of their campaign promises into policies, thus for the most part we don’t think that most will be surprised by Trump’s U-turn.  We think the real surprise lies in the pace of the decisions and the number of his core political stances which have been reversed in a little over a week.

The change began the previous Friday with the bombing raid of an airfield in Syria as retribution for a brutal chemical weapons attack launched by Assad on Syrian civilians.  Trump often criticized Obama about getting involved in the Syrian civil war instead of going after ISIS and here he is doing the same thing.  Of course, Trump doesn’t see it that way – he claims it was a one off designed to send a message about the use of chemical weapons.  To prove it, Trump reversed his stance on NATO – he no longer thinks that its "obsolete".  Why? – Because it was now adapting to the broader mission against terrorism and ISIS.

Now, the economic policy reversals the caused the fireworks in the markets – last Wednesday the following headlines flashed across trader’s screens from an interview with The Wall Street Journal:

Trump’s signature campaign promise was that he would officially label China a currency manipulator on day one of his Presidency.  This promise was in jeopardy from the start since it never materialized on his first day but now he said that by doing so it would jeopardize his discussions with Chinese President Xi Jinping regarding North Korea.  This is a far cry from the campaign trail where in July 2015 he said that China was “ripping us left and right” and in May 2016 he said that the US "can't continue to allow China to rape our country" and in June 2016 he called Chinese leaders "grand chess masters" at manipulating their currency.

The headline that received the greatest attention was Trump’s view that the USD was “getting too strong”.  This, of course, caused the dollar to swoon against all the major currencies.  However, his comments about low interest rates will have longer term implications.

Trump said he prefers the low interest rate policy of the Fed (big surprise here considering he’s a real estate mogul be trade) and he also signaled support for Fed Chair Janet Yellen.  Now, this is surprising since he criticized her during the campaign for maintaining low interest rates to help the Obama administration.  He even offered some kind words toward her saying "You know, I like her, I respect her”, which could be seen as keeping the door open to her reappointment.  Truth be told, Trump doesn’t need to replace her since he can influence the makeup of the Fed through appointments.  There are three vacancies in the seven member board of governors which he can fill this year.

A good portion of the USD’s, loss attributed to Trump’s comments, were reversed on Thursday after the US dropped the mother of all bombs (the largest non-atomic bomb) in Afghanistan near the Pakistani border.  The target was a tunnel complex used by terrorist and managed to kill at least four ISIS group leaders. 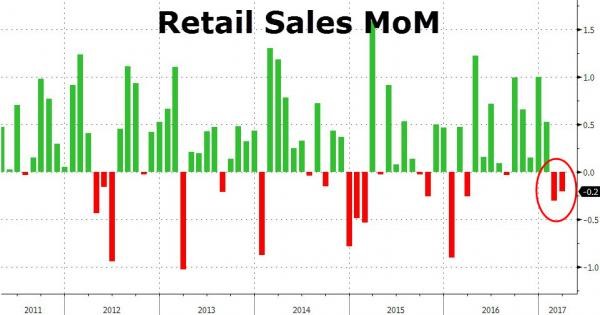 However, the USD was back on the defensive after Friday’s disappointing economic hard data.  Retail sales fell for the second month in a row by -0.2%.  Spending in February was revised down to -0.3% from 0.1%. Excluding autos and gas, spending rose 0.1%, less than the market’s 0.3% forecast.  Making matters worse, for the Fed not the consumer, consumer prices fell for the first time in more than a year by -0.3% pushing the year over year rate down to 2.4% from 2.7%.  Rising inflation is the cornerstone of the Fed’s hiking intentions and now this report, along with the last jobs report, pretty much guarantees that the Fed won’t raise interest rates June.  Fed fund futures are currently pricing in a 56.7% chance of a rate hike in June and a 76.3% chance of a hike in September.

The main takeaway from the week was that Trump’s view on the USD and, more importantly, low interest rate policy may be signaling a breakdown in the USD.  The move in the USD below the 100 yen handle, and its move below the 200-day moving average are telling us that a change may be afoot.  We would like to see a confirmation in the euro in order to be convinced that the USD has topped for now.  We are looking to see how the elections in France turnout.  If Marine Le Pen fails to win the election then we can picture the euro moving higher against the USD which would likely convince us that the USD has indeed topped for the year, as long, of course, as geopolitical concerns wain.

In the short term, the US dollar index is due for more losses as the technical condition as deteriorated - as can be seen by the inability of the momentum indicators to move above the downward sloping trend line in blue on the chart.  The first layer of support is around the 200-day moving average and the green upward sloping trend line drawn of the May 2016 low.  At the moment we would only expect that line of support to break is if as describe above – that the euro would move higher due to Le Pen’s election loss. 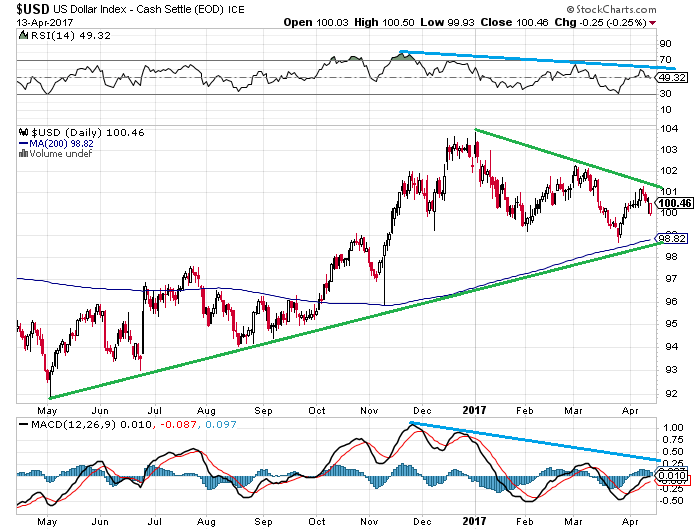