Up, Down, All Around

The USD was the loser on the week despite attempts by American president Donald Trump to talk up the greenback and ECB chair Mario Draghi’s attempts to talk down the soaring EUR.  At the same time, US treasury secretary Steven Mnuchin tried to talk down the USD, while America imposed tariffs on Asian-made products while talking up world trade.  Confused?  Read on.

As regards economic statistics, last week proved rather light except for Thursday and Friday.  Canada November Retail Sales disappointed at +0.2% vs the call of +0.8%, while the ex-autos number surprised at +1.6% vs the call of +0.9%.  Evidently Canadians weren’t buying too many new cars.  Canadian inflation came out at +1.9% yr/yr, with the core rate +1.9% yr/yr, the latter higher than the anticipated +1.5%.  In the home of the brave, December Durable Goods (always a volatile number) came out at +2.9%, well above the call of +0.9% while Q4 GDP rose to 2.6%, down from the 3.2% in the previous quarter – not what the market was primed for! 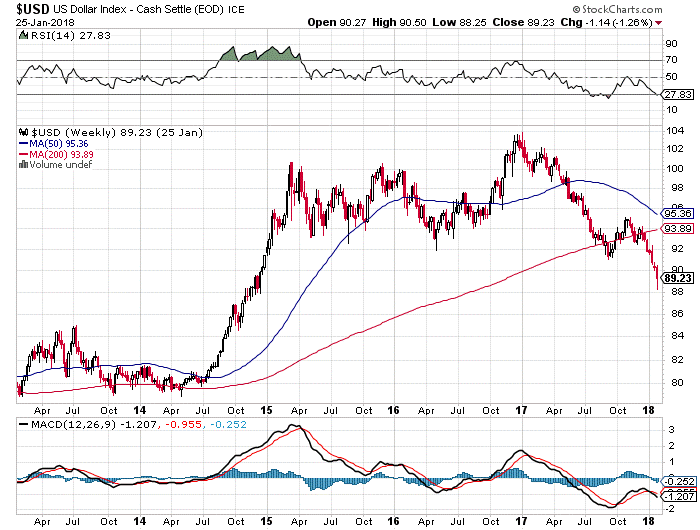 US Dollar Index – Sinking out of sight?

Regardless, the USD could not catch a break from its now, year-long sell-off.  Speaking in Davos, Switzerland (where the uber-elite meet to eat etc.), Steven Mnuchin came out fully in favour of a weaker USD, saying it would help the American export sector regain market share and create jobs and, most tellingly, act to reduce the bloated US trade deficit.  Said deficit clocked in most recently at an astonishing -71.6 billion for December (call was -68.9 billion).  It doesn’t take much to realize that one of Donald Trump’s goals is to reduce this mammoth number dragging on the US economy although, to be frank, this issue is so old and is constantly in and out of investors’ perceptions – see chart below.  The issue dates back to the early 1980s and even earlier.  (We think the last time America posted a monthly trade surplus was April 1976)

While Mr. Mnuchin was talking down the greenback, Mr. Trump was talking up the USD in a wide-ranging speech in Davos.  He said he would like to see a strong US dollar as a result of a strong US economy – which is actually putting the horse before the cart, so to speak.   He spoke as well of recent major tax cuts, widespread deregulation and declared America ‘open for business’.  He talked up what he termed ‘free, fair and reciprocal trade’ while his Sec-Treas somewhat walked back his support for a weaker US. Up, down, all around! 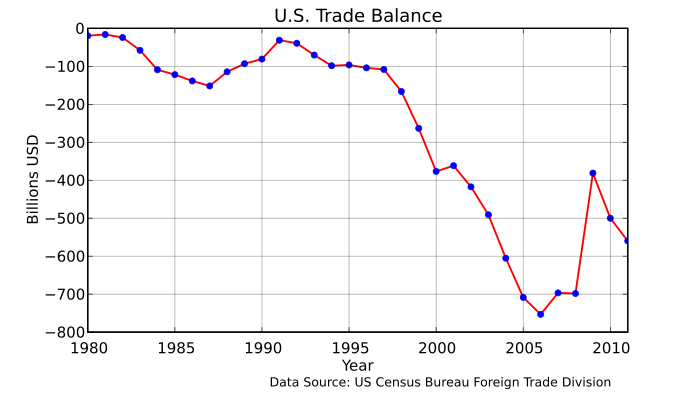 A tiresome yet unresolved issue

Still looking at Davos: Bank of Japan governor Kuroda spoke in a panel discussion where his comments on Japan’s growth and inflation outlook were taken as relatively optimistic.  As the BOJ is the world’s most dovish central bank, these remarks were taken as hawkish and helped push JPY stronger against the greenback.

ECB chief Mario Draghi spoke last Thursday.  The EUR has been surging in recent weeks on the back of a rallying zone economy and improving business sentiment, and M. Draghi attempted to talk it down somewhat, however circumspectly.  Our colleagues Dr. Long and Mr. Short cut through the usual verbiage and summarized as follows;

M. Draghi stated that interest rates would remain at current levels for ‘an extended period of time’, likely until at least year-end.  He has to choose his words carefully: an overly strong EUR could derail the zone recovery after many years of sub-par growth.  All of this hemming and hawing over administered rates stands in sharp contrast to the Federal Reserve and Bank of Canada, both of whom appear committed to several rate hikes this year.

As we have mentioned before, commodity prices move opposite to the USD.  Unsurprisingly, oil has moved sharply stronger with greenback weakness and this also contributes to strength in CAD as well.  But America, oddly enough, is approaching production parity with Saudi Arabia and may surpass the Kingdom in the near future.

The above chart is clear, and this is one of many issues facing the fractious members of OPEC in years to come.

Around this time of year, the world’s political, business and cultural elites meet amid the snowdrifts in the charming ski resort at Davos, in Switzerland, to discuss weighty global affairs. (A cynic might say it’s more the 1% deciding what’s best for the 99%, but never mind).  The meetings ended last week with attendees earnestly convinced of their rightness, filled with plans to improve the lot of the world and so on.  With that we bid adieu once again to Davos. 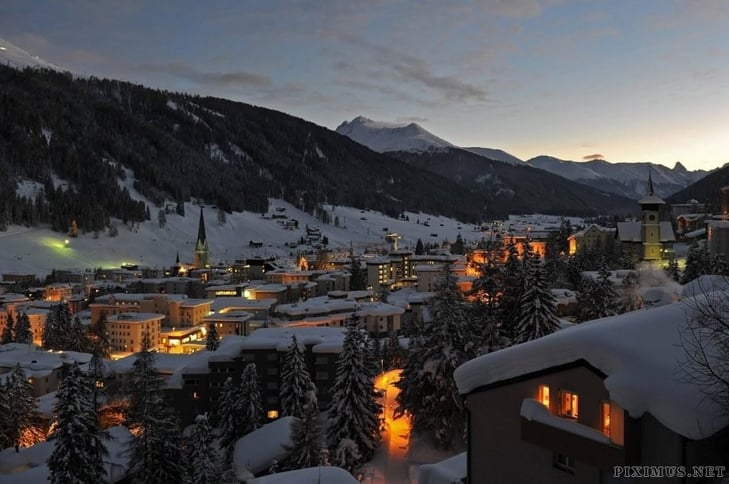 Night falls on Davos – and the elites?

The coming week sees plenty of key economic statistics, including a Fed rate announcement on Wednesday and culminating with the all-important US jobs numbers on Friday.