Following the surprise election of Donald Trump and the Trump-induced rally in equities that ensued, the past week found Messrs. Long and Short returning to the more prosaic business of examining economic statistics and parsing statements from political and business leaders.  Mundane but necessary work, indeed.  Fortunately, there was plenty to look at.

Let’s begin with everyone’s favourite stat, US jobless numbers.  While the November report was somewhat mixed, showing a gain of +178K jobs (call +175K), a downward revision in October payrolls (+142K from +160K) and a decline in the jobless rate to a nine year low of 4.6% (call 4.9%), the participation rate (62.7% from 62.8%) remained at levels not seen since the days of Jimmy Carter.  In fact, this rate has seen a steady decline since the 2008 election of the soon-to-be-departed Barack Obama, and may go a long way towards explaining the success of Mr. Trump.  To bump this rate up the economy needs to grow more in order to entice people back into the labour force, and Mr. Trump is committed to doing just that.

On balance, though, nothing in last Friday’s report would lead investors to believe the Fed would hold off raising rates on December 13/14.  The debate in 2017 will likely be about the timing and degree of future rate hikes.

Additionally, US Q3 GDP topped expectations, coming in at +3.2%, the strongest level in two years, on an uptick in consumer spending.

The Dow hit several record highs during the week but now appears primed for a correction, while ‘bond king’ Bill Gross declared the Trump rally to be over and bond yields to have peaked.  While market players respect Mr. Gross and pay careful attention to his musings, there was little evidence of a rally in bonds, with 10-year US treasury yields sitting firmly around 2.40% and 30-years remaining above 3.00%.

In the True North, Friday’s November labour market numbers surprised on the upside, with the rate declining to 6.8% from 7.0% (call 7.0%).  Following October’s outsized gain of +43.9K jobs – all part-time – November saw a gain of 10.7K jobs, once again all part-time.  The breakdown was +19.4K P/T vs -8.7K F/T, indicating that the Canadian economy continues to hemorrhage full-time jobs, not exactly a sign of economic strength. However, while bouncing stronger with most other currencies against the correcting greenback, the Loonie was also bolstered by various pipeline project approvals and, especially, events in Central Europe, Vienna to be precise and OPEC in particular. 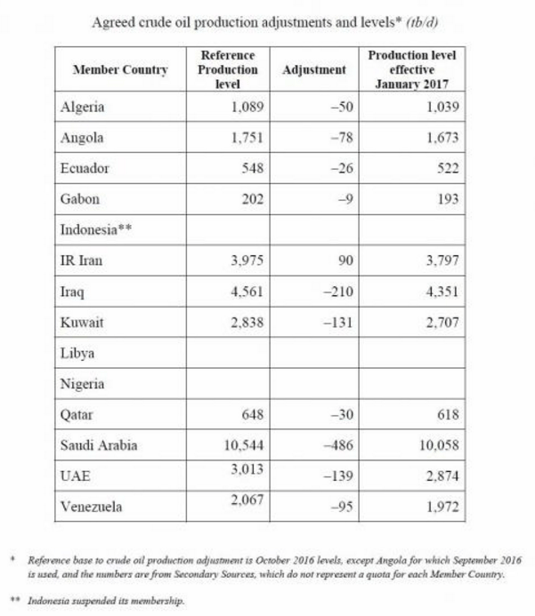 At its most recent meeting in the Austrian capital, OPEC finally cobbled together a production agreement between its fractious members along with outsider Russia, details as below.  Total cuts amount to around 1.2 mln bbl/day.  Mr. Market was impressed by this display of (apparent) solidarity and pushed WTI above $51 USD/bbl in response, a strong rally.

This accord will likely hold for some time, but the fundamental problems facing the cartel haven’t disappeared.  President-elect Trump will likely green-light the Keystone XL pipeline from Alberta to American refiners – obviously reducing American demand for OPEC crude – but again, as we have mentioned before, American frackers stand ready to start producing at a moment’s notice.  $60 USD/bbl appears to be the threshold at which frackers can start producing – and exporting. However much OPEC pines for the glory days of the past, those days are over.

The Eurozone will be dealing with the fallout from the Italian constitutional referendum of December 4th.  Results were unknown at the time of writing but, regardless, Eurocrats have been put on notice. The populist uprising commencing with Brexit in the UK and the election of Mr. Trump in the US has been gaining momentum, with current French PM Francoise Hollande – whose approval ratings hover around 4% (!) – declining to run again in next year’s French elections.  The strength of Marine Le Pen and her Front Nationale has badly spooked French parliamentarians and others in the zone.  Not surprisingly, in the case of the Italian vote, there have been dire warnings of economic losses, disrupted markets and the like, all similar to the gloom and doom prior to the UK plebiscite and the American election and, like those two, just as likely to turn out overblown.

The ECB kept a low profile with little of note to report.  However, the political turmoil which may be arriving in the Eurozone in the next few months, with elections in France, Germany, the Netherlands and possibly Italy, will overshadow any monetary manoeuvres by Mr. Draghi at the bank.

In the UK, talk is now of a ‘soft Brexit’, one in which the UK would continue to have access to the EU but in an associate status, similar to Sweden and Norway which would require paying a fee of some sort to Brussels.  This led sterling to top spot in last week’s gains.  The takeaway from this development is that the EU, which haughtily dismissed any talk of a soft Brexit last spring after the vote, now finds itself under populist assault and lacking the sort of leverage it once fancied it possessed.

In the Far East, as noted in last week’s newsletter, the Bank of Japan continued its tight control of the Japanese yield curve, crushing any thought of rising yields.  Once again, the currency took the hit, with JPY lagging in the over-all currency rally against the USD.

Finally, we look once again at our favourite measure, the US dollar Index (USDX), to see how our ‘golden cross’ is progressing. 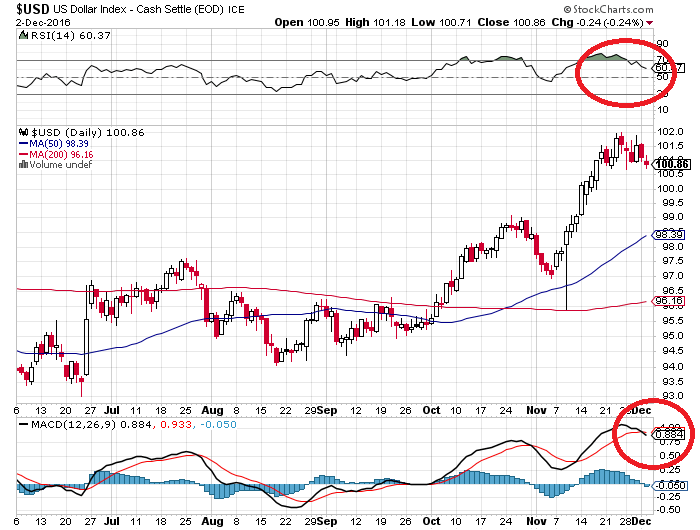 Clearly, the 50 day moving average (blue line) continues to widen its lead over the 200 day moving average (red line), a solidly bullish signal. So it remains Up, up and away for Superbuck!  A correction is overdue – or perhaps a bit of stray kryptonite – as this does look a bit stretched, but all good traders know that The trend is your friend. Having said that, the USDX is having a difficult time extending its gains beyond last week’s highs.  It also failed to extend a three-week advance and this week’s light US news calendar may help spur a correction.  As for the technicals, the momentum indicators have all turned down.  Consider yourself warned.