First it was tariffs on washing machines and solar panels and this week President Trump turned his attention to steel and aluminum. You could argue that this was a political move aimed at securing the rust belt states ahead of the mid-term elections in November.  Alternatively, we shouldn’t be surprised that Trump is doing exactly what he promised to do as a candidate.  Or maybe we should be surprised – a politician that actually keeps his campaign promises!  But then again, we didn’t need trade tariffs to prove Trump is a different kind of politician – we already knew that by his pervasive use of twitter.  Most countries - including Canada, China and much of Europe - have already issued statements condemning Trump's decision.  But it wasn’t just countries, economists and pundits also chimed in with their “tariffs are bad” analysis.

It didn’t take long for the EU to respond.  Hours after this Trump tweet, European Commission President Jean-Claude Juncker said the EU is prepared to respond quickly and forcefully by targeting imports of Harley-Davidson motorbikes, US bourbon whiskey, and Levi Strauss & Co. jeans.  Trump isn’t the only one that knows how to play politics – the EU’s targets were chosen to maximize political pressure on American leaders.  Harley-Davidson is based in House Speaker Paul Ryan’s home state of Wisconsin, while bourbon whiskey hails from the state of Senate Majority Leader Mitch McConnell, and San Francisco-based Levi Strauss is headquartered in House Minority Leader’s Nancy Pelosi’s district.

Trade tariffs will increase inflation and lower growth, which is a bad recipe for the USD.  Need I remind you that a lower USD is a non-talked about goal of the Trump administration – thus Trump is correct when he stated that it’s easy to win a trade war – the result will be a weaker dollar, which is what he will get.  The bad news is that you and I will have to pay for it.  Let’s all hope that this doesn’t lead to a shooting war.

Trump wasn’t the only person to move the markets with their words last week; three others were able to move the needle as well.  Let’s start with the new Chairman of the Federal Reserve, Jerome Powell.  During his first Congressional Testimony as the leader of the Fed, he noted that the US economic outlook had brightened in the past few months - "My personal outlook for the economy has strengthened since December".  Powell’s statements helped Mr. Market to increase the odds of the Fed’s December dot plots projection of three rate hikes in 2018.  A couple of days later, New York Federal Reserve president Bill Dudley said that four rate rises by the central bank would constitute a “gradual” pace of tightening.  This would suggest that there may be an upward revision in this month’s dot plot forecasts.  Thus, Mr. Market now believes that three hikes of 25bps are most probable and that there is a greater chance of four hikes than just two. 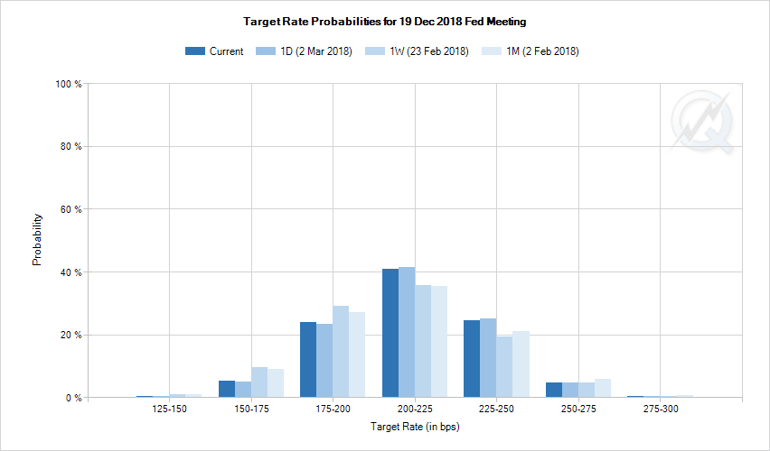 Trump’s tariffs and the talk of 2, 3, or 4 Fed hikes have been in focus since the start of the year so last week’s remarks were not new or surprising.  However, statements by Bank of Japan Governor Haruhiko Kuroda total caught the market off stride.  Kuroda said that the BOJ will start thinking about how to exit its massive monetary stimulus program around the fiscal year starting in April 2019.  This was the first time he’s provided any clear guidance on timing for normalizing policy.  The yen was already up on the week due to risk aversion as global stock markets were down on trade tariffs, but Kuroda’s statement caused the Yen to surge even more.

The worst performer on the week was the CAD, falling for the second straight week and for the fourth time in the past five weeks.  Risk aversion and lower oil prices didn’t do the CAD any favours.  Trump’s tariffs talk also took their toll on the currency since Canada is the number one supplier of both steel and aluminum to the US.  This does not bode well for the ongoing NAFTA negotiations and moves the US a step closer to a withdrawal from the entire process.  On the weekly chart, the CAD needs to hold the green trend line or it will fall to the lower blue one the 77 cent level.  A break there would send the CAD reeling to the 75 cent level.  The momentum indicators are pointing towards more downside to the currency.  Let’s see how the Bank of Canada will respond at this week’s policy meeting on Wednesday. 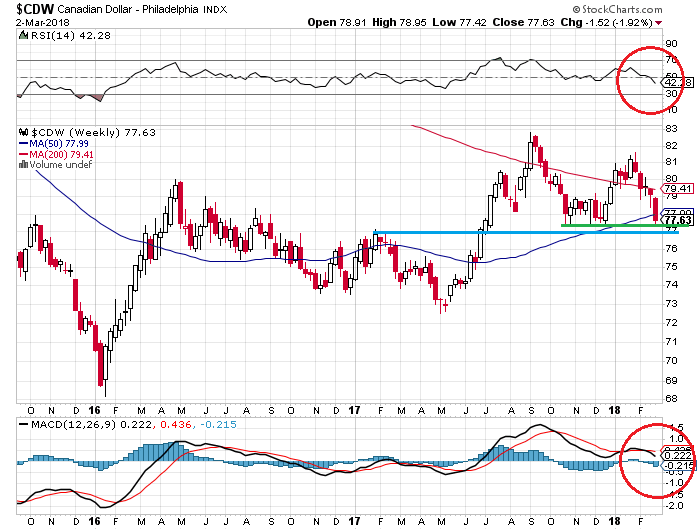