Back in 1972, when telephones still had wires and Richard Nixon was in the White House, the late, great Marvin Gaye asked this plaintive question, “What’s going on?” In recent days, investors have been asking the same question.  With the help of our colleagues Dr. Long and Mr. Short, skilled in the art of parsing central-bankspeak, we will examine what emerged last week in both Ottawa and Washington.

Starting in the True North, last Wednesday the Bank of Canada surprised no one with a quarter-point hike, taking the overnight rate to 0.75% from 0.50%, with odds of another rate hike before year-end rising to around 75%. Mr. Market likes those kinds of odds – who wouldn’t? - and bought the loonie with a vengeance, rallying in recent days from just under 1.3000 to the 1.2700 range, its strongest level since August/2016. The Bank’s monetary Policy Report came out with a relatively bullish outlook on the Canadian economy for both 2017 and 2018 with 2019 looking softer.

It should come as no surprise that market players, as usual, ignored the longer-term projection and focused on the near-term outlook.  Like, 2019 is so far from now! 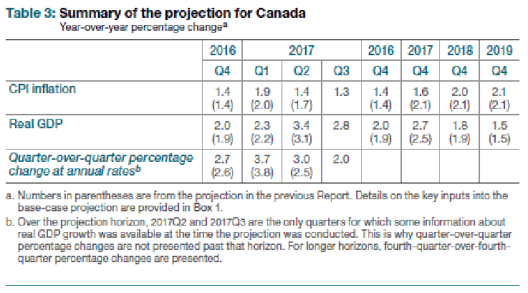 What has the Bank very concerned is the exceedingly high level of personal debt in Canada, largely, but far from exclusively, in mortgage debt. 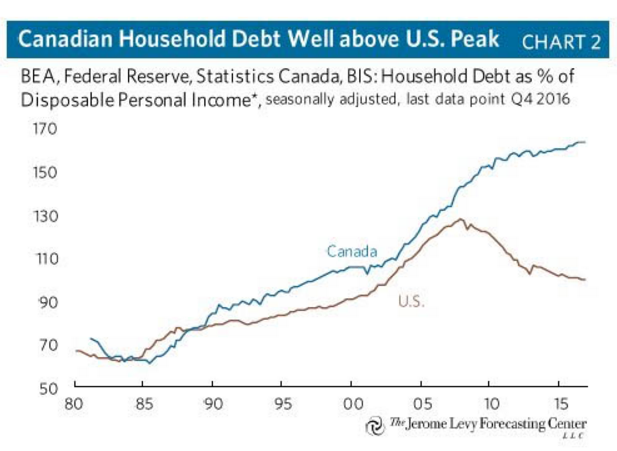 American analysts have bemoaned the fact that, while the US economy appears to be creating jobs in a rather larger and more steady fashion, worker pay is increasing only marginally.  The problem is far worse in the Canadian economy, and has gone largely unremarked. 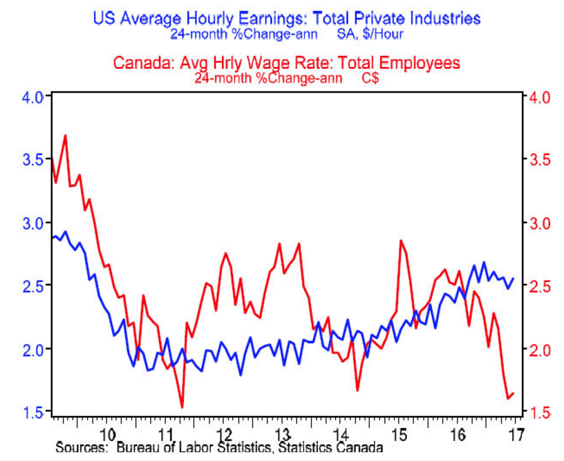 These charts, and others, do not paint a picture of a healthy Canadian economy growing with broad-based strength; quite the contrary in fact, one in which living standards are seemingly maintained by reliance on debt.  Workers have evidently made up the shortfall in wages by borrowing to maintain a preferred lifestyle.  Nowhere is this more apparent than in the frothy housing sector, where prices have long since become detached from economic fundamentals. 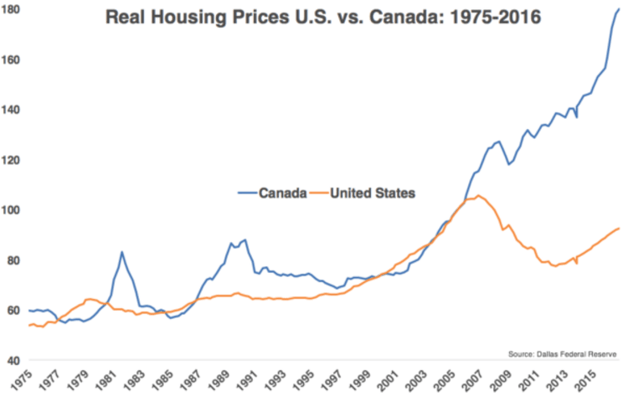 Yet another worrisome divergence

So is the Bank really concerned about an overheating economy, or is this just an attempt, however clumsy, to apply the brakes to a red-hot housing market?  Dr. Long and Mr. Short suspect the latter, given the persistence of low inflation in both the Dominion and elsewhere, low wage gains in the Canadian economy, and an absence of any evidence of cost-push inflation.  In fact, stubbornly low inflation was recently cited by Fed Janet Yellen – more below.

The Canadian bond market did not sit idle during all this. Five-year Canada yields have been rising in recent weeks and recently hit a near-term high. Given that mortgage rates and a host of other administered rates are set on spreads over bond market yields, it can be expected that rates on a host of credit products – both corporate and consumer – will start rising. Given the record indebtedness of the average Canadian, this does not augur well for the domestic economy in a few years’ time.

Finally, a strengthening loonie, while good for importers and travelers outside Canada, will play havoc with exporters, and this is the sector mentioned recently by both Governor Stephen Poloz and Deputy Governor Carolyn Wilkins as underperforming the rest of the economy.  To what extent the BOC will abide a strong loonie is unclear, but we suspect the Bank is not pleased with the recent sharp rally. 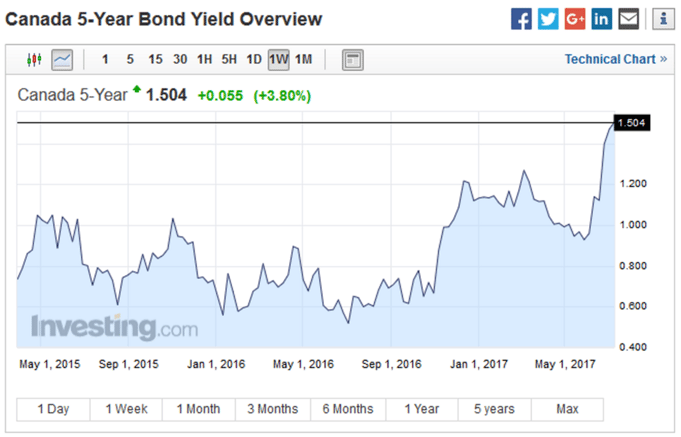 So what was Janet Yellen up to last week?  In her mandated twice-yearly appearance before the House and Senate banking committees last Wednesday and Thursday, Ms Yellen managed to confuse the plebes somewhat.  She touched on the subject of inflation, saying she ‘expects the forces holding down consumer prices to fade in the months ahead’, which would permit the Fed to continue raising, i.e. ‘normalising’ rates in a steady fashion, given a steady rise in price inflation. However, Ms Yellen also implied the so-called neutral rate is much lower than in past years, perhaps around 3%, so current levels aren’t that far away from it.  (The neutral rate is the Fed Funds rate at which the economy is neither too hot nor too cold but just right – the famous Goldilocks economy)  But almost on cue, Friday’s release of US June CPI came in at +1.6%, below the call of +1.7% and down from May’s reading of +1.9%.  (So much for Ms Yellen’s predictions of rising inflation).  Retail Sales, released at the same time, showed a decline of -0.2% versus the call of +0.1% and ex-autos was even worse, declining -0.2% versus the call of +0.2%.  Lastly, Friday’s University of Michigan consumer confidence report came in at 93.1, below the call of 95.0 and a sizeable drop from the previous read of 95.1.  American consumers, it appears, are neither happy nor in a mood to spend – not an image of a robust economy.  As we have mentioned before, this is a far cry from the strong recoveries of both the Reagan and Clinton eras, so it should come as no surprise that the greenback took yet another hit.

The AUD was the winner of the week, largely due to rising prices in the base metals market – which also benefit CAD – and an improving outlook on trade with China.  Large yield spreads between Australian government debt and US treasurys certainly helped.

The coming week sees mostly secondary economic releases Stateside, with a slew of critical numbers coming out in Canada this Friday.