Judging by the hawkish remarks made last week by central bankers at the ECB Forum on Central Banking held at Sintra, Portugal, the days of ultra-low, ‘emergency’ interest rates and aggressive money-printing is likely drawing to a close.  Whether this policy pursued globally for the past nine years, following the Panic of 2008, was wise or foolish or even warranted is beyond the scope of this newsletter.  Rather, we will examine what appears to be in store for investors and market players in coming months.

What does seem to be certain is that rates are headed north, i.e rising although where and to what extent is less clear.  The Federal Reserve moved first and investors had anticipated, in addition to the Fed’s recent hike, at least one or two mores hikes in the second half of 2017.  That optimistic scenario appears to be crumbling with apparent legislative paralysis in Washington and less than stellar economic statistics emerging in recent days e.g. May Durable goods dropping -1.1% vs the call of just -0.6%, or Q1 GDP rising 1.4%, better than the call of +1.2% but still quite anaemic, hardly the stuff of Reagan- or Clinton-era recoveries.  Unsurprisingly, the USD took it on the chin, and was almost the week’s loser.

By contrast, CAD was the big winner on the week, with Bank of Canada Governor Stephen Poloz making it very clear, speaking at the aforementioned conference, that excess slack in the Canadian economy was being used up, that the rate cuts of early 2015 have served their purpose and that all this would be taken into consideration at the Bank’s next meeting on July 12th.  Coupled with the hawkish remarks made by Deputy Governor Carolyn Wilkins two weeks ago (The Hawks Take flight – June 20th, 2017), a quarter-point hike by the Bank is a virtual certainty, with recent odds in excess of 70%.  Mr. Market likes those kind of odds, and bought up the loonie in response.

As part of this (apparently) coordinated move by global central bankers, the European Central Bank (ECB) and its governor Mario Draghi sought to clarify recent confusing remarks made the bank chief.  Initially M. Draghi had referred to reflationary forces replacing deflationary forces which caused a EUR rally, then backtracked. Now it appears that the ECB will likely begin tapering (reducing) its monthly bond purchases under Quantitative Easing while not yet raising its benchmark overnight rate.  While confusing to commoners and even some market players, the result will be to cause Eurozone bond yields to rise over time, hopefully in an orderly fashion. The ECB does not want the EUR to rally sharply but, rather, in a smooth strengthening that does not overly upset exporters (read: Germany). 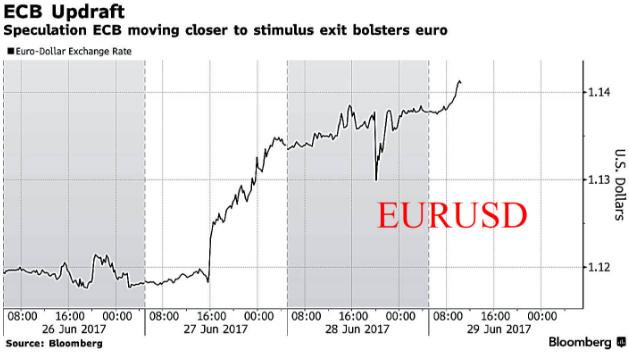 Not to be outdone, Bank of England Governor Mark Carney remarked that, although he was happy with the current level of British rates, still the Bank of England should consider raising rates.  Given the previously-unsuspected degree of hawkishness -  as outlined in our report of June 20th -  amongst the bank’s policy-setters, this may occur sooner rather than later.

The Bank of Japan, in its usual determination to be different, declined to join in talk of raising rates and cutting back on QE.  Rather, the bank made plain its preference for the status quo in Japan, continuing to target a 0% yield in the JGB (Japanese Government Bond) 10-year  and letting rates adjust around that.  Given that this policy or variations of it have been in place for nearly thirty years, one might be forgiven in thinking that perhaps a new approach would be warranted in Japan. Clearly that notion would be mistaken.  And small wonder JPY was the loser on the week.

So what about our friends in the bond market?  The Nervous Nellies who jump at shadows?  All this talk of raising rates, tapering and rolling off bonds (not replacing maturing notes) from the vast balance sheets of central banks gave them all a good fright, indeed.  The US 10-year bond, the world’s number one security, had in mid-June rallied to 2.12%, below its low of 2.15% from last November after the election of Donald Trump, after trading as high as 2.63% in the interim.  That level of 2.15% proved to be strong resistance, as bullish traders sought to push it lower but to no avail.  Now with hawkish talk pervading the fixed income market, traders are pushing bond yields higher (and bond prices lower), all the way to 2.28% at one point last week.  It is quite some distance to 2.63% and a lot can happen between here and there, but the tone does appear bearish and it is possible the market will go there and take another run at much higher yields, with all that implies for higher rates everywhere else.

The coming holiday-shortened week sees a number of secondary economic releases, with the big numbers on Friday, both Canada and US jobs numbers. 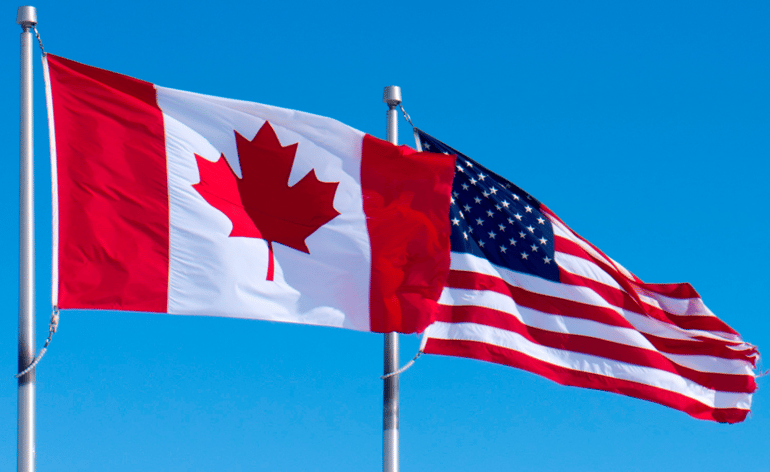 We wish all our American readers a very happy Independence Day, and we trust our Canadian readers had an enjoyable Dominion Day break.