The USD managed to finish in the middle of the pack having, been able to weather the storm over the inability of the Trump Administration to replace the Affordable Care Act (Obamacare) the previous week.  This was particularly egregious despite the Republican Party having a majority in both houses of the legislature and the Presidency.  The GBP and CAD were at the front of the pack due to political and domestic considerations respectively while the euro fell behind due to central bank perception.

The UK government invoked Article 50 of the Lisbon Treaty which begins the divorce proceedings between itself and the EU.  The GBP responded by dropping more than 70 pips in a matter of minutes but managed to recover and eke out a small gain as cooler heads prevailed.  The divorce will take at least two years to complete and there will be many twist and turns until then.  Case in point – on Friday morning the EU submitted its response to the Article 50 and they gave the UK one year after they leave the Union to work on a trade deal and only if they settle their financial commitments.  It is believed that the EU could demand the UK pay £52billion to settle outstanding liabilities, including pensions for EU staff and ongoing infrastructure projects.  Adding insult to injury, Scotland also officially requested another referendum.  While these developments are negative for GBP, the currency did manage to post its third consecutive weekly gain. 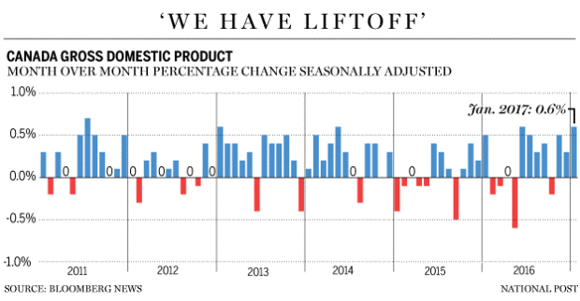 The CAD turned in a solid performance on the week due to faster growth in Canada and higher oil prices.  January GDP surged ahead by 0.6%, which works out to 2.3% on annualized basis.  This suggests the country has moved past a slowdown brought on by slumping oil prices and has some economists speculating that Canada’s economy could now outpace the US for 2017.  The currency also received a helping hand from oil prices.  The price of oil recovered nicely on the week, managing to bounce off the $47 level and going on to gain nearly 5% on the week, which was the most in a week since OPEC's decision to cut output.  Speaking of, the reason for the strong weekly gain was due to speculation that OPEC will extend its deal to curb output and ease a global glut. 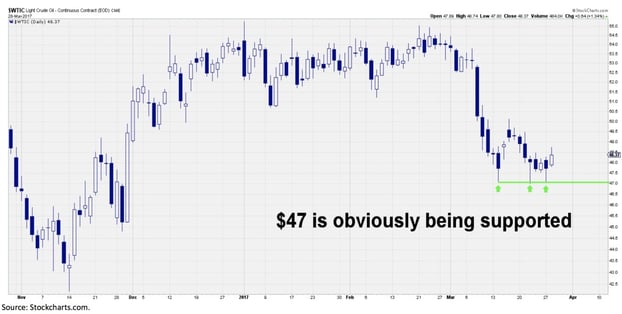 It was a tough week for the euro as it fell from the 1.09 level the previous week to finish the week a little above 1.0650.  The first blow occurred when a newswire reported that ECB sources said markets had over-interpreted the message from the March meeting and that it was meant to convey fewer tail risks, not a change towards a more hawkish policy.  The ECB had been taken aback when markets started to price in an interest rate hike early next year so this leak was meant to reassure investors that their easy-money policy is far from ending.  The second blow to the euro was news that inflation was moving in the wrong direction, slowing to 1.5% from 2% in February.  When inflation was running close to the ECB’s 2% target, ECB chief Mario Draghi had been under pressure to wind-down efforts to stimulate the Eurozone economy. But the latest report will go a long way to ease the debate over possible early tapering by the ECB.

When it comes to the USD it feels like the tide has turned.  The USD has gone from struggling to make gains with what should be USD positive news, such as US jobs report and the rate hike, to falling on clearly USD negative news.  Thus, it’s not surprising that the USD is the worst performing currency in Q1 2017.  In fact, the USD index has already reversed all of its post-election gains – so much for the “Trump Trade”.

The USD didn’t receive any help from the ten talking Fed members last week.  They all roughly said the same thing – they want to raise rates 2 more times and maybe 3 if growth accelerates in response to fiscal reform.  Guess what, we all know this already.  Additionally, the USD was hit hard but managed to regain its composure after reports that President Trump was studying ways to “penalize currency manipulators” as part of his goal to fight unfair trade. These measures would be aimed at pressuring other countries to strengthen the value of their currencies at the expense of the USD.  This, of course, comes on the heels of the upcoming visit of China’s President Xi Jinping visit to U.S. President Donald Trump’s southern White House, Mar-a-Lago resort in Florida this week.  Trump is preoccupied with the trade deficit with China and we are sure that Xi Jinping will politely remind him that he needs to worry about the budget deficit and national debt which China helps to finance by recycling its USD receivables into US Treasurys.  So you can see where this is going – if you apply a border tax or name us (China) as a currency manipulator we will stop financing your debt.  This is a key issue, especially since the US has hit the debt ceiling and will run out of money to pay its bills by the end of August. 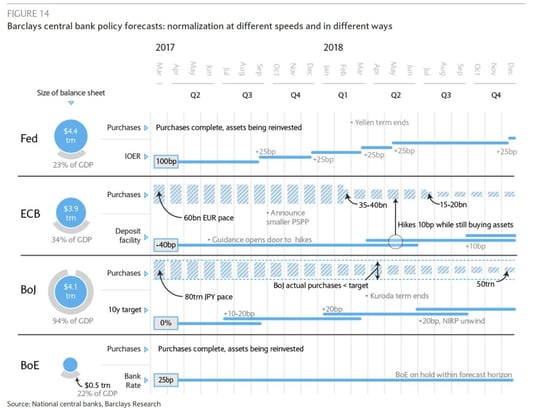 The convergence meme is also slowly gaining traction as the year progresses.  Let’s face it, slowly but surely, global central banks are looking to normalize monetary policy and end the era of easy money policies.  Yes the Fed has hiked rates but the other central banks are also moving from dovish to neutral or hawkish stances.  In the graph above, Barclays has laid out what "coordinated global renormalization" would look like.  Yes, policy normalization will happen at different speeds, but the very fact that central bank policy convergence begins could mark the top in the USD.

Two weeks ago, we suggested that the USD index looked “poised to return to at least its early February lows” and if that occurred then “a move to the 200-day moving average” was “not out of the question”.  Well, that is what has transpired and the index has managed to bounce off the 200-day moving average and reach the 50-day moving average.  The technical indicators are mixed with the MACD turning up while the RSI has turned down.  We suspect that this Friday’s jobs data is the most important piece of data to watch because all of the forecasts are looking for slower job growth.  If this transpires, then it could be the catalyst that causes the USD to fall back down, leading to lower trading in the next few weeks. 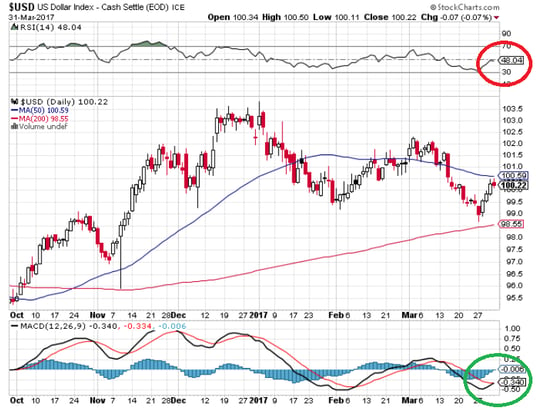 On the weekly chart, the USD index is in danger of breaking below trend line support so caution is warranted. 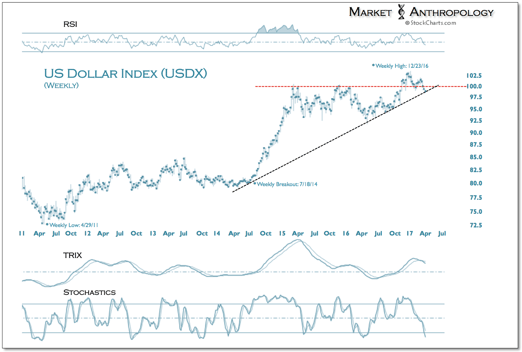