During the eight long years of the Obama administration, pundits were convinced that sustained American economic growth in excess of 3.0% was, as they termed it, a ‘mirage’. Certainly, during the post-2008 era, it certainly seemed that way and unlikely to change appreciably. Thus the most recent read on domestic growth took many by surprise.  Initially, Q2 2018 growth clocked in at a strong 4.1%, but many analysts believed the number was overstated and expected the following month’s revision (when more information is available) would see a decline to a still-strong 4.0%. Instead, the economy was stronger still, registering 4.2% growth in Q2, the highest in four years and reviving talk of more, rather than fewer, Fed rate hikes going forward.

As was pointed out in last week’s letter (Winds From Wyoming August 27/2018), somewhat dovish remarks from Fed chair Jerome Powell appeared to cast doubt on an aggressive rate-hike programme by the Fed. Mr. Market was quite happy to cash in some profits following the greenback’s ascent over the past several months but all that ended with the strong GDP read.

Additional support for the USD came from strong consumer confidence numbers. Conference Board measures of consumer sentiment hit the highest level in 18 years, coming out at 133.4 vs 126.6 consensus of analysts. In general terms, households (55+) were very confident while younger households (35-) were less so, the latter likely because they were too young at the time to remember the Clinton-era boom and came of age in the sluggish post-2008 era.

Lastly, an interesting statistic measuring the outlook of American jobseekers hit its own highest level since 2001. The so-called Labor Differential calculates the difference between ‘Jobs Plentiful’ and ‘Jobs Hard to Get’ as perceived by those looking for work.

All of this is to state that the US economy, despite the many doubters and sceptics out there – and they are legion – appears to be on a roll. The engine has a full head of steam!  Hang on for the ride.

Things in the True North aren’t quite so rosy. The ongoing trade talks with the US scheduled for completion – either yay or nay – by midnight last Friday were, in the absence of agreement at that time, scheduled for resumption this week following the long Labour Day weekend. US Trade Rep Robert Lighthizer and Cdn Foreign Affairs minister Chrystia Freeland – both of whom appear to have a mutual dislike – have taken a personal hand in the negociations. It is no exaggeration to state that Canada needs this deal.  An improved version of this agreement was available last spring and there for the taking, but misguided political considerations precluded acceptance.  Now Canada stands behind Mexico – flush with a recently concluded deal – with considerably less leverage in these talks.

Recent economic stats released in Canada were not encouraging.  June GDP was flat (0.0%) vs the call of +0.1%, while Q2 GDP came in at 2.9%, below the call of +3.0%. While these are minor misses, still they are misses, while the US is consistently beating the estimates. Traders don’t need much more than that to hit anything with a beaver on it, and CAD ended up one of the losers on the week.

The late summer doldrums continued on, although likely to dissipate after the upcoming Labour Day weekend. Of note were remarks made by Italian Economic Affairs minister, Paolo Savona, who wrote with an historical reference to Walther Funk, the wartime head of the Reichsbank:

“The Funk Plan provided for national currencies to converge into the German mark’s area and this is what you would like and have partially achieved.”

Such language coming from a senior Italian minister is rather harsh, but Italy’s economic status is parlous.  Moreover, given German economic dominance of the zone, the country has reverted to historical norms and indulged in bullying of its neighbours. Italy has been vocal in its opposition to this sort of behaviour. 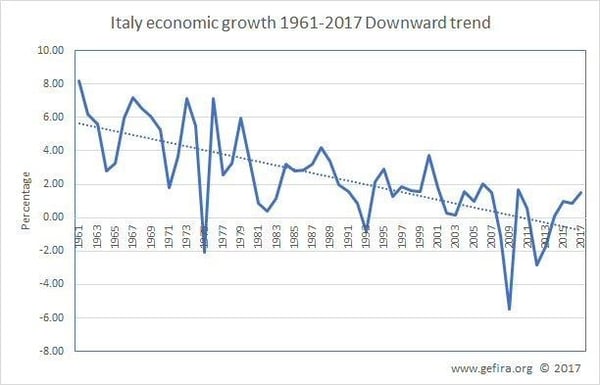 Many workers are emigrating away from Italy to Germany and more prosperous regions of the EU, while the outlook for the heavily-indebted country and its tottering banks grows increasingly grim.

The coming week sees a Bank of Canada rate announcement this Wednesday, as well as the widely-watched jobs numbers in both Canada and the US on Friday.