End of the Line?

Following the Panic of 2008, central banks globally engaged in unconventional means of easing rates. This was done with two policy goals in mind: 1) spark a general economic recovery and 2) cause inflation to rise to the arbitrary level of 2.0% set by most central banks.  (The fact that central banks, along with governments, fought mightily to reduce inflation from double-digits in the early 1980s is conveniently overlooked). This entire policy appears to have been a near-total failure – as is unquestionably the case in Japan– yet central banks continue to tinker with rates and bond yields. An evidently slowing global economy presents a major challenge to our betters in the rarefied world of central banking, so let’s take a closer look. 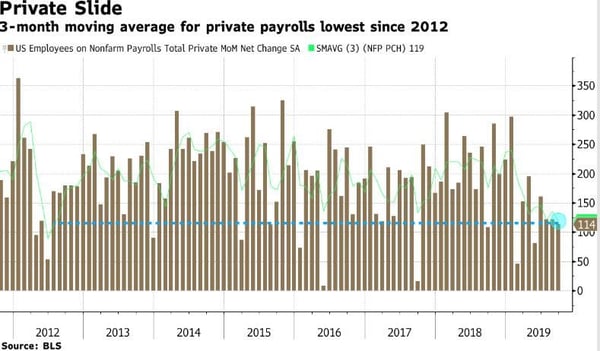 US labour statistics for September were released last Friday and were mixed at best. The headline number came in at +136K jobs vs call of +145K, while the jobless rate hit a 50-year low of 3.5%. The two-month jobs revision was a solid +45K, but both hours worked and wage growth were flat. As can be seen in the above chart, private sector jobs growth isn’t exactly stellar, slipping to levels last seen in 2012.

What’s causing employer nervousness? An obvious answer is the Sino-American trade war, dragging on without a clear resolution although talks have been scheduled for this week. We think a global slowdown in manufacturing may be the culprit. Starting with the widely watched Chicago PMI (Purchasing Managers’ Index), PMIs elsewhere show the same trend.

The Chicago PMI shown in the figure below dropped to levels not seen in four years, with New Orders, Employment, Inventories, and Production all falling, indicating contraction. Prices Paid, Supplier Deliveries, and Backlogs rose but were overwhelmed by the other declining indices.

Adding to the general malaise was an astonishingly weak ISM (Institute of Supply Management) report released on Tuesday, coming in at 47.8 vs the call of 50.0 and falling from the August read of 49.1. This was the weakest ISM since June 2009. 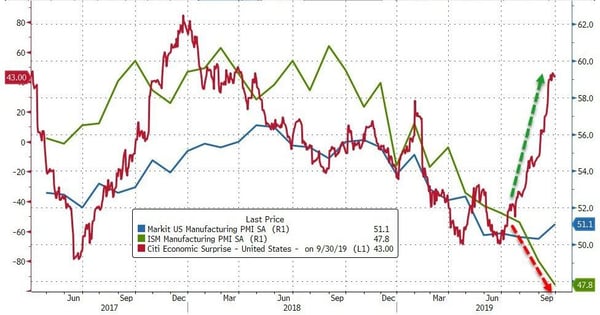 Not surprisingly, equity markets sold off sharply in response while bond yields fell, with investors seeking the safe haven of US treasurys.

Overseas shows much the same sluggishness, most notably in export powerhouse (and Eurozone paymaster) Germany.

While it can be argued that only 14% of US jobs are in manufacturing, with 86% in services, the earnings of manufacturers make up almost 68% of S&P (Standard & Poors) earnings. BOTTOM LINE: Factories count.

US September Factory Orders were forecast to rise +0.2%, so the reported decline of -1.7% (weakest in three years) provides further evidence of sluggishness.

Lastly, an omen of possible future equity market weakness. Investors generally have worked on the assumption that the US economy has ‘decoupled’ from the global economy. Weakness elsewhere did not necessarily translate into weakness at home. This assumption may no longer be valid. 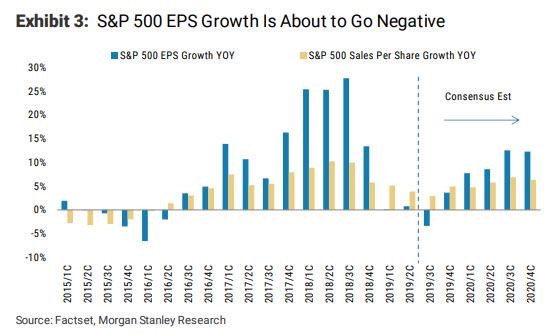 All of this presents a major problem for global central banks. The unconventional policies pursued post-2008 have driven interest rates to unbelievably low levels with negative bond yields – once a rarity – now commonplace. The European Central Bank (ECB) has been following an expansionist monetary policy for several years now along with the Bank of Japan (BOJ) with decidedly mixed results. The textbook says that, to combat a recession, central banks should lower rates, and the deeper the recession the greater the cuts in rates. Simple but effective – until the Panic of 2008. Now most central banks have little room to cut short-term rates – both the ECB and BOJ are already in negative territory – so policymakers are left in a quandary. Both the Bank of Canada (BOC) and the Fed still have some room to ease rates, although not a lot, so they can both engage in some fine-tuning of rates. Other central banks aren’t so lucky.

The above chart shows a 1 in 2 chance of just one more rate cut by the Fed this year, but nearly 2 in 5 odds of two further rate cuts in 2019. At least the Fed has the room!

In the True North, in a light week for releases, July’s GDP printed at 0.0% vs call of +0.1%, with the annual rate 1.3% vs call of 1.4%. The Trade Gap narrowed slightly to -955.0 mil. vs call of -1.1 bil.  The loonie traded in a tight range all week, weakening slightly last Friday as the yield on 2-yr treasurys topped the yield on 2-yr Canadas attracting some arbitrage interest, with traders selling overvalued Canada bonds and buying cheap US treasurys.  However, in a more ominous report, the IVEY September PMI came out at 48.7 following August’s stellar 60.6 read. This is the first contraction since March 2015 and confirms the softening trend seen in America and overseas.

The coming week sees a mix of secondary statistics stateside along with a heavy dose of Fedspeak. The only number of note in Canada is Friday’s jobless numbers, always worth a look.