Hurry Up and Wait

The old army saying aptly described activity in global markets last week.  Traders have been playing a waiting game for what seems an eternity, anticipating developments in the ongoing Sino-US trade war and some clarity – anything! – in the BREXIT saga. Additionally, both the Federal Reserve and the Bank of Canada are slated to make rate announcements this coming Wednesday (a pure coincidence), leaving players to speculate on what the Fed may do and what the BOC likely won’t. There was a paucity of hard economic news to digest, but let’s take a jump in, shall we, and try to sort it all out.

The overarching theme these days is one of perceived global economic weakness. Canada August Retail Sales declined -0.1% vs the call of +0.2% and well down from the previous +0.5%, while US September Durable Goods Orders fell -1.1% vs the consensus of -0.8%. The various MARKIT US PMI numbers all came in slightly better than expected, and held above the all-important 50.0 level, although just barely.

Our learned colleagues Dr. Long and Mr. Short gleaned a decline in the Employment component of the October index, tumbling to 47.5 from 48.6 in September – the lowest reading in ten years. Adding to investor gloom was retail bellwether Amazon missing on most metrics, including earnings per share at $4.23 vs call of $4.59, and the first quarterly decline in operating income in over two years.

Overseas wasn’t much better. While economic weakness is largely a fact of life in most countries in the Eurozone, paymaster Germany has long boasted a strong manufacturing/export sector. Nowadays, however, not so much, and even the service sector is fading. 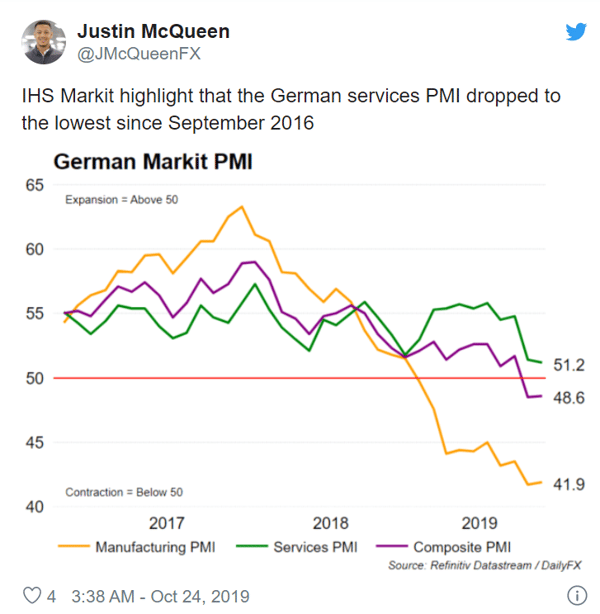 It’s no surprise then that at its most recent meeting last Thursday, where Mario Draghi handed off the top job to newcomer Christine Lagarde, the European Central Bank left its policy rates unchanged. Round 2 of quantitative easing (QE2) is still set to commence November 1st, with monthly bond purchases of 20 bil EUR. The ECB made plain these purchases would continue until the bank feels the time is appropriate to raise interest rates. Based on the Japanese model, that may be quite some time yet (if ever).

Which brings us back to the Fed and the Bank of Canada, and their coincident – but not simultaneous – rate announcements on Wednesday. With regards to the latter, the BOC will likely stand pat for now. Although the Canadian economy, prima facie, appears quite strong, considerable weakness is being masked. Real GDP has expanded about +1.4% over the past year, but population growth has registered +1.5%, so there is some actual contraction in the economy. The fastest growing segments as seen in the latest jobs numbers are government (no surprise), cannabis (!), and multi-unit (condo) construction; the latter coming at no surprise. Altogether, these segments comprise around 40% of the Canadian economy and are posting growth of over 3.0% yr/yr. This means the other 60% is growing at zero, or even less.  Canadian household debt stands at 101.3% of GDP, comparable to levels seen in America just prior to the Panic of 2008 at 98.2% of GDP. Repaying this enormous debt now consumes 15% of disposable income, and that bodes ill for retail sales going forward, the most recent noted above being a harbinger of future weakness.

All of this might argue for a rate cut, but we think the BOC will wait until the recently re-elected Trudeau government settles itself in and announces a budget, likely around the end of next February. In the meantime, like everyone else, the BOC will watch the Fed and developments on the BREXIT file and the ongoing trade disputes. This may see the CAD continue to improve, supported by relatively high interest rates and firm crude prices.

The Federal Reserve, on the other hand, is under intense pressure to cut the overnight fed funds rate. 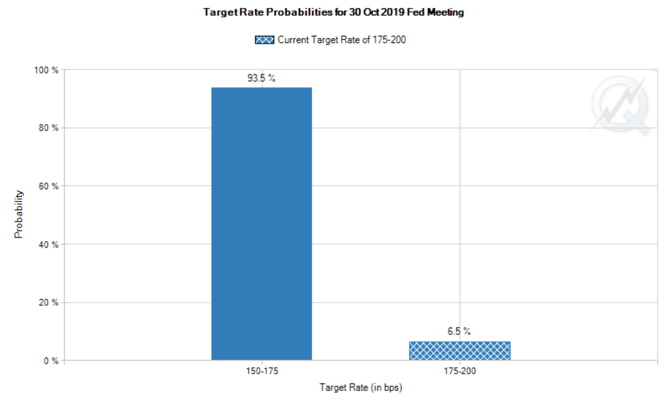 As the above chart makes abundantly clear, the guys in Chicago are pricing in a quarter-point cut by the Fed on Wednesday as a virtual certainty. We aren’t entirely sure that Fed chief Jay Powell will oblige players, given that he described the most recent cut as a ‘mid-cycle adjustment’ and not the beginning of a protracted easing cycle. But there do seem to be signs of weakness beginning to appear in the economy, and doubtless the Tweeter-In-Chief will make his displeasure known to all should the Fed decide to stand pat.

In 333 B.C., Alexander the Great entered the city of Gordium (in Turkey) and encountered an ancient wagon, its yoke tied up with an impossibly complicated knot. Legend held that whoever could undo this knot was destined to be ruler of Asia. The legendary warrior examined the knot, made a few attempts at unravelling it and finally, in frustration, brought his sword down upon it, neatly cutting it in two. Thus, the metaphor of easily solving an intractable problem by means of creative thinking or a previously unknown loophole was born.

British PM Boris Johnson finds himself in much the same predicament with Britain’s divorce from the EU, which has been dragging on for far too long.  While prior PM Theresa May was not really a BREXIT supporter, Mr. Johnson is clearly determined to make the break, and soon. The situation is exceptionally fluid – which explains GBP being the loser on the week – but at the time of writing the EU, at the request of the British government, has granted an extension (to January 31st) to settle this whole thing. So, Mr. Johnson is now seeking to play hardball with his Labour opponents in parliament, essentially giving them two options: approve this deal before the October 31st deadline or be prepared for a snap election over the issue.   Labour knows that voter polling is running against them, that Mr. Johnson would likely obtain a majority and that BREXIT would become reality as a result of this snap vote. He wins either way! A simple solution to what had been an apparently irresolvable problem – Alexander would certainly approve. GBP, though, may be in for a rough ride in the next few weeks.

The coming week features the aforementioned central bank rate announcements, along with a full slate of US statistics including labour market metrics and Fedspeak late in the week. Canada, aside from the BOC, by contrast will see just a handful of numbers.