The week just past indicated continued strength in the US economy, ongoing confusion over the BREXIT issue and more finger-pointing in the EU; in other words, business as usual. Let’s all take a closer look, shall we?

To begin with, there was a near-complete absence of economic news in Canada, so the loonie was reacting to events elsewhere. In America, a mixed lot of statistics painted a largely positive image of the domestic economy. Retail Sales for October topped analysts’ call smartly, +0.8% vs the consensus of +0.6%, while ex-autos at +0.7% easily beat the call of +0.4%. Inflation remained subdued, with October CPI recording a rise of +2.5% y/y largely in line with dealer expectations.  Bond traders – always a skittish lot - in recent weeks had become wary of apparent strength in the economy and had pushed 10-yr treasury yields close to 3.25%, but the largely benign CPI numbers encouraged a rally in the fixed-income market with the 10-yr now trading around 3.10%.

In a closely-watched speech in Dallas, Fed boss Jerome Powell gave some insight into current FOMC thinking. Despite the usual criticism leveled at any central bank engaged in tightening credit, or the risks currently known and unknown, Mr. Powell did not diverge from the script and made clear that the Fed will continue on its gradualist path to rate normalisation. (Some would say good for you, Mr. Powell). He acknowledged that, while the Fed is seeking a ‘neutral’ fed funds rate – neither stimulative nor accommodative – he admitted that the Fed really doesn’t know what that rate is, but is focusing on ‘risk management’ to achieve it. In other words, the Fed remains data-dependent. 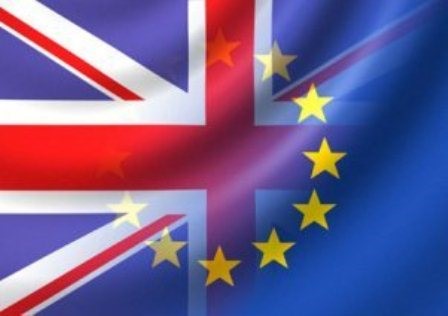 The increasingly confusing – and increasingly tiresome – BREXIT issue emerged once again. As this was covered in some detail last week (43-24-2, November 12, 2018), we will not re-hash it here.  We will note, however, that GBP was one of the more volatile currencies last week, gyrating on political developments, rumours or cabinet resignations &c. concerning BREXIT. To say that PM Theresa May has bungled this issue badly would be an understatement.

In the EU, the ongoing squabble between Brussels and No.3 member Italy continued unabated.  The following tweet badly spooked market players: 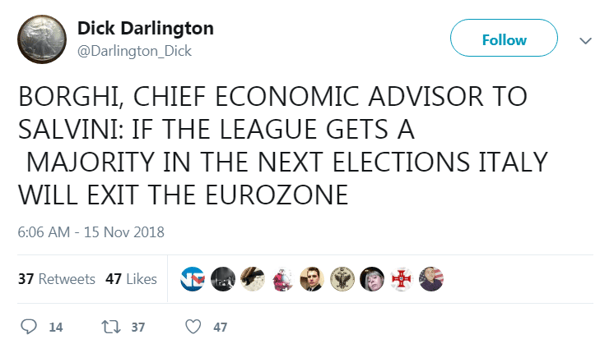 Claudio Borghi promptly denied saying this which, given zone political realities, may or may not be true, but it is a measure of the strained relations the EU has with not only the UK but Italy as well.  Although the common currency gained some ground on the week, still it is trading not much above its 52-week low.

It is well past time that we took a closer look at everyone’s favourite commodity, crude oil. We should first remind readers that commodity prices (priced in USD) move in a direction opposite to the USD with only rare exceptions, like gold. With the greenback rallying so sharply in recent months, commodity prices have been under pressure, and no commodity is more visible than crude oil. President Donald Trump, aka the tweeter-in-chief, has been quite vocal about rising oil prices and has made his feelings known. 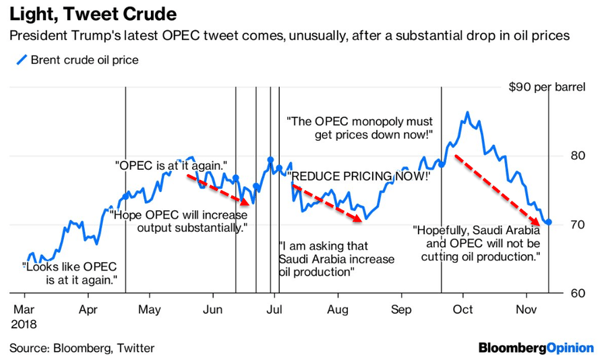 Given Mr. Trump’s lengthy experience in reality TV, we sometimes wonder if this isn’t just play-acting on his part. Regardless, as the above graph shows, crude prices were already heading south before his latest missive. As a result, oil producers are scrambling to maintain market share, and Canada is no exception. Part of the weakness in the loonie was related to declining crude prices, and the straitened position of Alberta oil sands producers.

The above graph shows the current price of WCS in USD/bbl, which is roughly a $40 discount to WTI. The recent low matches the early 2016 low and, hopefully, will hold. But small wonder Calgary is depressed! It has been estimated that Canada is losing $100 million USD per day in potential revenue, and the recent court ruling halting further construction of the Keystone XL pipeline through the US certainly does not help. With the Trans Mountain pipeline project tied up in federal/provincial politics, the future looks grim for oil sands producers.

Of course, it can also be argued that the global economy may not be all that healthy either, despite a roaring US economy. Economic sluggishness in the EU, Japan and China – the last still engaged in troublesome trade disputes with America – may well be a harbinger of declining demand for crude. 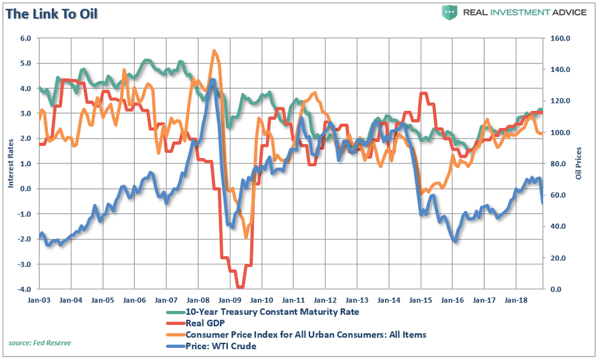 The above graph clearly demonstrates the correlation in recent years of bond yields, GDP, CPI and WTI prices, essentially the recovery from the Panic of 2008. The decoupling of oil in early 2015 likely represents the growing impact of American frackers – the outlaws who are re-writing the rules of the game to the detriment of OPEC and others.

The coming week will be shortened by American Thanksgiving on Thursday. Black Friday should be interesting for its take on consumer attitudes, while Canada sees a slew of important numbers that same day.