Whether it’s the Canadian political scandal involving Prime Minister Justin Trudeau and the WE Charity, or the resignation of the finance minister, the CAD seems unfazed by national headlines and continues its march higher.

Meanwhile, the GBP was the last remaining major currency to finally mark a bullish golden cross on its daily chart, with the 50-day moving average finally crossing up through its 200-day moving average. Also, UK data surprised to the upside with both the July retail sales and the preliminary August PMI adding to Sterling’s fortune. Unfortunately, all the positive stuff was washed away after negotiators on both sides of the English Channel warned of lack of progress in the all-important Brexit talks.

Maybe it’s just me, but it feels like the mood changed last week. Two items struck a chord with me: the release of the Federal Reserve minutes from its previous meeting and a turn in the economic data in several countries.

Firstly, the minutes. Mr. Market was primed and ready to hear how the Fed was going to continue to support markets. However, hopes of “yield curve control” (because it’s been such a deafening success for other central banks) or more increases in QE (because one can never get enough) were not even discussed by Fed members. There’s an old adage that says, “when in doubt, get out”, so get out they did as investors sold stocks, gold, and the dollar when the minutes weren’t clear about the Fed’s next move.

Secondly, a mixed bag of US economic data and disappointing economic data from abroad help to sour market sentiment going into the weekend. In the US, housing activity and the preliminary PMI were up while the unexpected increase in jobless claims and the August manufacturing surveys for both the New York and Philadelphia Fed were disappointing and worrisome. 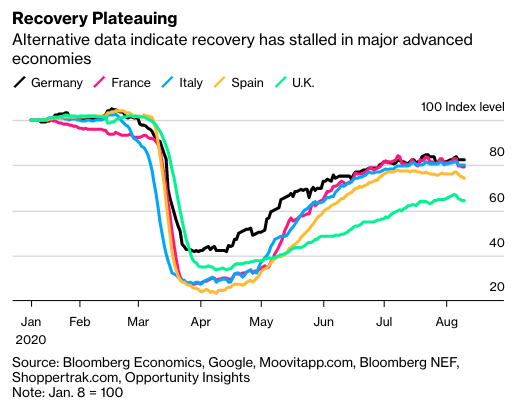 The disappointing economic news from other countries, especially the ones that have been faring better than the US during this pandemic, seemed to have sapped enthusiasm completely. The latest high-frequency data from Europe (chart above) is suggesting that the recovery in rolling over. The August PMI’s is confirming this as well. Eurozone aggregate manufacturing PMI slipped to 51.7 from 51.8, the service PMI fell to 50.1 from 54.7, and the composite fell to 51.6 from 54.9, its first decrease since April.

Meanwhile, high-frequency data from advanced economies shows much of the same, an economic recovery that is waning. It is starting to look like the V is over.

Back in June, I said in the Dispatch titled “Reality Bites” that I saw the pandemic playing out in three phases. The stock market crash in March was the liquidity phase, which caused the Fed and central banks around the world to spring into action. National governments turned on the fiscal taps to help households and small businesses during forced lockdowns. The central bank and government response would lead to the hope phase, as the economy slowly reopened while the stock market went on a tear and set new all-time highs.

The stock market is at a higher level than it was before Covid hit, yet corporate earnings are down and 40% of the credit market is impaired. I believe we are about to enter the third phase, the insolvency phase, where economic data will show that the real economy is mired in a historic crash.

Case in point: it is said that small businesses are the backbone of the American economy. Half of all Americans own or work for small businesses, which historically creates nearly two-thirds of new jobs. This next chart shows that total small business revenue decreased by 19.1% compared to January 2020. This shows me that economic recovery couldn’t even manage to get back to prior levels and that the so-called V-shaped recovery is transitioning to a reverse square root recovery or worse, a lob-sided W recovery. These types of recoveries take a long time to get back to above zero growth, so business with high costs and high debts eventually go bankrupt.

This scenario is being priced into financials. The bank stocks are making new 52-week lows. Over the last year the KBW Bank Index, an index of 24 of the largest US banks, has under-performed the S&P 500 by 30%. In fact, you can’t have a sustained stock market recovery without the participation of bank stocks. Over the last 10 years, the banks have returned just 51% as much as the broad market. 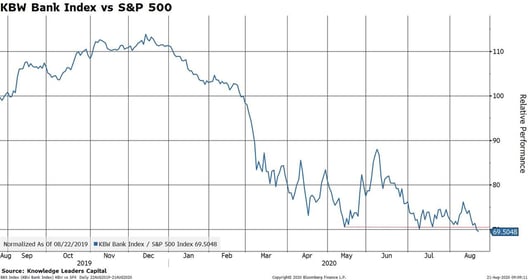 This spells trouble for stocks ahead. We are entering into the “stock market crash” months of September and October, not to mention the Presidential election in November. One thing I know for sure is that risk aversion caused by crashing stocks leads to a strong upward move in the USD. The momentum indicators in the daily US dollar index have turned and warning that a counter-trend rally in the dollar is waiting in the wings. Interestingly, even though the index made a new low last week, the momentum indicators did not confirm the new low, creating a bullish divergence. Furthermore, Friday’s price action appears to have marked an outside up session ahead of the weekend. 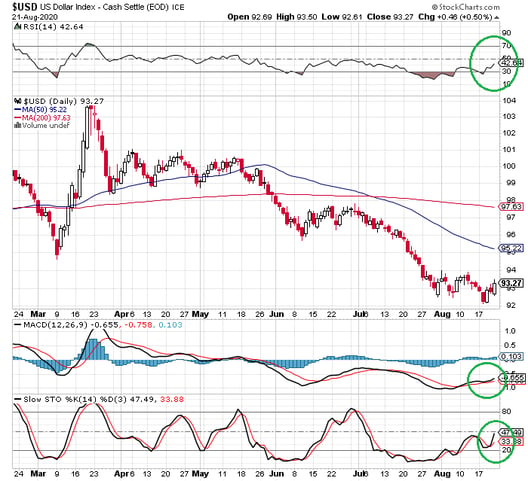 This economic downturn caused by Covid and the response to it didn’t have to play out this way. There was a time in our lives where we saved for things. I was born in the sixties, and back then we saved for a colour TV, a vacation, a car, an emergency. We don’t do that anymore. Even companies and governments saved money for unexpected turns in the economy back then. There is one country that still adheres to the saving mentality of yesteryear: Norway.

It has a rainy-day fund worth $1.15 trillion, the world’s biggest sovereign wealth fund. It was started in the 1990s to invest the country’s oil riches and the Norwegian government has been tapping into the fund, withdrawing billions of dollars, since March to pay for the pandemic-related costs. At least the Norwegians won’t be faced with countless tax increases and spending cuts for many years on out, like the rest of us likely will.

In the week ahead, we will see revised Q2 GDP growth rates from several countries, however the primary driver will be the Jackson Hole symposium, which will be a virtual event this year. We may get a sense of where central bank policy makers are going to steer their policies next.