Markets came down with a dose of reality last week as the National Bureau of Economic Research officially declared that the US entered a recession in February. The NBER is the official authority of the US business cycles and it does not use the standard textbook definition of two consecutive contracting quarters of GDP growth to define a recession.  So, the recession is now 4 months old, but when will it end? We do not have the answer to that, but we can tell you that none of the NBER recessions have lasted less than six months. Between 1854 to 1919, the average recession lasted 22 months. From 1919 to 1945, the average recession lasted 18 months. From 1945 to 2001, recessions lasted an average 10 months. The recession of 2008 lasted 18 months but led to the longest expansion in US history. The average of the last three recessions was about 11 months.  The good news is that recessions have become less severe over time.

Meanwhile, the World Bank released its new "Global Economic Prospects" report, warning that the pandemic had plunged the global economy into a deep recession of historic proportions and the recovery outlook is grim, particularly for developing countries. The report goes on to say the global economy will contract for the first time since World War II.  It said the Global GDP will probably shrink by 5.2% this year, marking the deepest global recession in eight decades despite unprecedented monetary and fiscal policy by central banks and governments.

Not to be outdone, the Paris-based Organisation for Economic Cooperation and Development forecast the global economy would contract 6% this year before bouncing back with 5.2% growth in 2021 – providing the outbreak is kept under control. 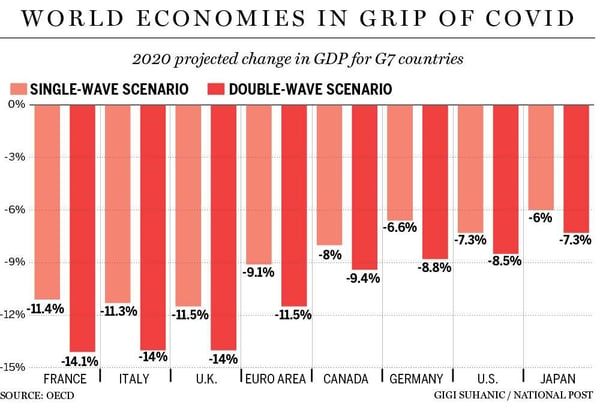 Based on the performance of equity markets last week, they may be coming around, slowly, to the notion that a V-shaped recovery is not in the cards. The stock market crashed in March, the liquidity phase, which caused the Fed and central banks around the world to spring into action. National governments turned on the fiscal taps to help households and small businesses during forced lockdowns. The economy slowly reopened.  This inspired hope and stock markets went on a tear for the next two months.

Last week’s downturn in equities looks to be the reality check. COVID-19 cases have started to spike in states which have re-opened but did not see an initial spike before the government shutdown, such as Arizona, Texas, and North Carolina, spurring fears of a second wave. The city of Houston may reinstate lockdowns.

We may be entering the insolvency phase where economic data will show that the real economy is mired in a historic crash. Case in point: last Thursday, the American Bankruptcy Institute reported that corporate bankruptcies soared during May. According to figures from legal-services firm Epiq Global, 722 businesses nationwide filed for chapter 11 protection last month, a yearly increase of 48% from 487 businesses in May of 2019. The surge was also seen on a month-over-month basis, which jumped by 28% from the 562 Chapter 11 filings in April. It’s not just small businesses: US corporate debt as a percentage of GDP is at an all time high. The debt dynamic will be an important factor to monitor, especially since debt is rising faster than GDP growth. 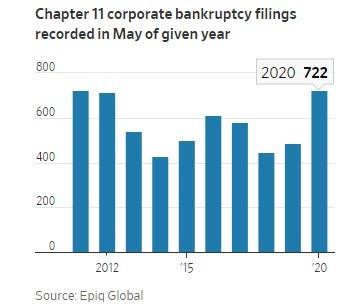 The Federal Reserve was front and centre last week. They left the benchmark interest rate unchanged in the 0.00-0.25% range, with no changes to the interest on excess reserves rate of 0.10% either. The central bank also suggested that it will continue to buy Treasuries and MBS at “at least the current pace”. This works out to about $80B/month in quantitative easing, which is more than double the $40B/month pace of QE3.  Astonishingly, the Fed’s dot plot show that 15 of 17 Fed members anticipate no rate increase will be necessary until after 2022. Thus, the key takeaway is that the Fed will have the market’s back for at least another year and half – the Powell Put is alive and well.

Finally, the currency market took its cue from the equity market last week and was decisively risk off. Safe haven currencies like the yen and Swiss franc led the pack as risk aversion was the theme of the week. Of course, this meant that the usual risk on currencies of the CAD, NZD, and AUD were at the back of the pack. The GBP was under pressure last week and will be so next week as well as the Brexit issue resurfaces. British Prime Minister Boris Johnson warned the EU that the UK will be ready to become fully independent on January 1, 2021 if the EU does not agree to a trade deal by the end of the summer.

The week ahead is a busy one with plenty of economic releases, an EU summit, and about eight central bank meetings. The economic data will be analysed to see what trajectory the recovery is on. The EU summit on June 19th will try to approve a controversial €750 billion euro stimulus package, the EU’s largest to date. Weekend leaks by key members are showing that a consensus may not emerge from this meeting but may have to wait for a second meeting of EU leaders in early July. As for this week’s central bank meetings, we don’t foresee any surprises; central banks will remain accommodative for the foreseeable future and will do more if the need arises. “Lower for longer” is the key central bank theme for now.