Following my colleague’s excellent technical analysis of the currency markets last week (2k Asks: Where’s the V?) it appears that, after a long hiatus, fundamental analysis of the economy may now be appropriate. There is no question that Q2/2020 was a complete disaster by any yardstick, but we are well into Q3/2020 now and there does appear to be room for optimismt.

There were quite a few numbers released in America last week which play into that assessment, so let’s take a closer look, shall we?

At the consumer level, July CPI rose +0.6% mth/mth, double the anticipated +0.3% rate and matching the previous month’s level. But like wholesale prices, the ex-food & energy number spiked higher at +0.6%, easily besting the call of +0.2% and the prior month’s +0.2. 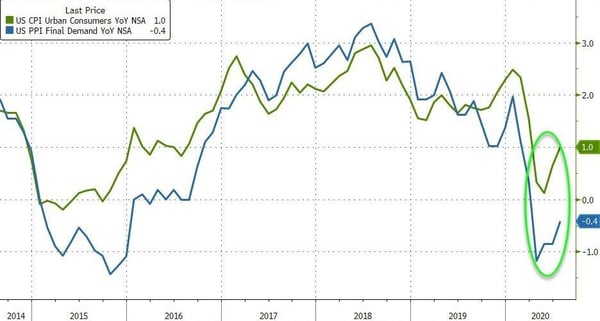 In another sign of an improving economy, weekly jobless claims hit their lowest level since the first week of March. Early August saw (in President Trump’s words) ‘big jobs numbers’, and claims followed through with a sharp decline from the prior week, finally dropping below one million with a print of 953K, dusting the street consensus of 1.200K and the previous week’s 1.186K claims. It was also the second week in a row of declining claims; after flattening out in June and rising ominously in July, claims now appear to be set on a downward course once again. 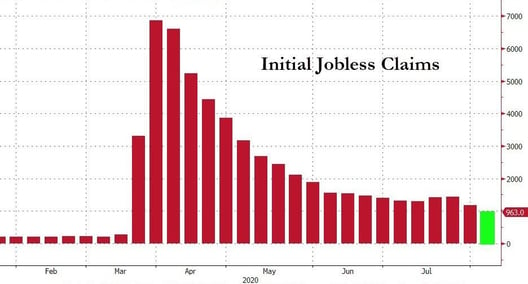 So, rising inflation, falling jobless claims – what else is out there? US factories showed signs of life in July. Although Industrial Production slowed from +5.4% mth/mth to +3.0% as expected, Manufacturing still showed some resilience. Forecast to decline from the previous +7.2% mth/mth to +3.0% in July, the metric beat the call with a print of +3.4%. 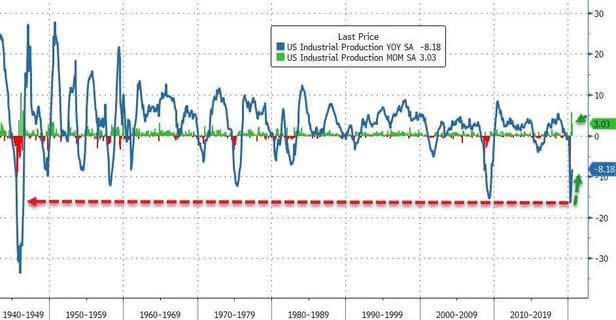 Last Friday saw the release of the always-pertinent US Retail Sales, and the numbers for July were no exception, although the headline print was a disappointment. Following some strong numbers in recent months (May +18.2% mth/mth, June +7.5% mth/mth) July was called at +2.1% mth/mth and the metric came up short at +1.2%. But our learned colleagues Dr. Long & Mr. Short drilled down into the results and found some interesting nuggets.

It turns out that the Retail Sales Control Group – used for GDP calculations – rose much more strongly than expected, +1.4% mth/mth vs the call of +0.8%. In fact, this was the highest figure since the glory days of 1999 and dot-coms.

The increase in retail sales was spread fairly well across all sectors, and overall appears to have largely recovered to pre-COVID levels. 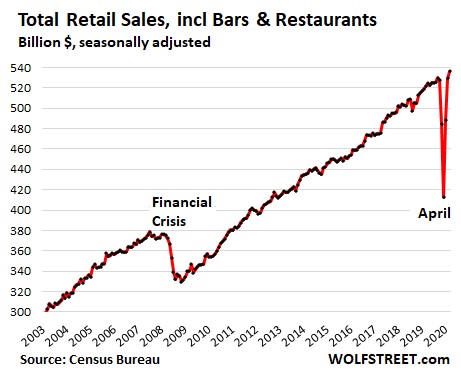 In yet another sign of the American economy getting back on its feet, treasury bond yields rose sharply. We haven’t spoken with our friend the bond salesman in some time, so he brought us up-to-date on what’s happening in the debt markets.

Last week saw the issuance of 3-year, 10-year, and 30-year treasury bonds, the last of record size at 26.0 bln USD. Since early August, the salesman explained, the yield on the benchmark 10-year treasury had been rising steadily, likely in advance of the previously-mentioned bond auctions, but also as bond traders – ever a jumpy lot – re-assessed their view of the US economy given the improving metrics outlined above. As can be seen in the chart below, the 10-yr yield hit a recent bottom in early August and has been rising steadily ever since.

We also asked the salesman about the record 30-yr auction, and he answered that it did not go well. The high yield was 1.406%, a level not seen since early July. He proffered various reasons: concern over the size of the issue, improving economic conditions, competition from an Apple 40-year corporate issue priced the same day – bond traders can always find something to be nervous about. 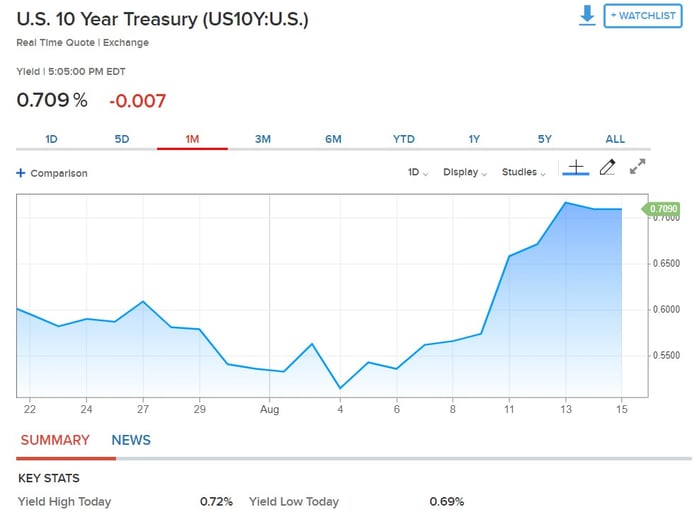 So, we have an uptick in inflation, improving retail sales, a better jobs picture, bond yields heading north, an announcement out of Russia of a vaccine for COVID-19 (named Sputnik, oddly enough). What are the takeaways for market players in all of this?

In the True North, the only number of note was released this past Friday, and continued with the theme of steady improvement. June Manufacturing Sales rose a record +20.7% mth/mth, easily beating the street call of +16.4%.

Little of note in the Eurozone last week, although in powerhouse Germany the ZEW Index of Economic Sentiment rose sharply above analysts’ call at 71.5, easily besting the previous release of 59.3 and dusting the prediction of 58.0. As well, Eurozone Qtr/Qtr GDP emerged at -12.1%, precisely matching the street call and the prior read.

The week upcoming sees a fair number of secondary economic metrics, although Canada does have June Retail Sales. Of interest will be StatsCan’s likely ‘flash’ estimate of July Retail sales. Little in the way of Fedspeak on tap.