Two weeks ago, we discussed how the market was struggling to price in what's happening with the Novel Coronavirus (COVID-19) outbreak, since the knock-on effects were still unknown. Since then, the fallout is starting to become clearer. Not only are the cases of COVID-19 rising outside of China, but it is also impairing the global supply chain as its workers are under quarantine.

The following chart maps out the country exposure to China. The more a country depends on China, the more challenging it could be for businesses to find alternative sourcing during a period of supply chain disruptions. Anyone involved in supply chain management must be worried about which regions will be impacted the most (even if the stock market couldn't care less).

The Japanese yen was rocked last week as fears of a recession undermined its traditional role as a safe haven. The world's third-largest economy contracted by 1.6% in Q4 2019: that’s an annualized pace of -6.3%. 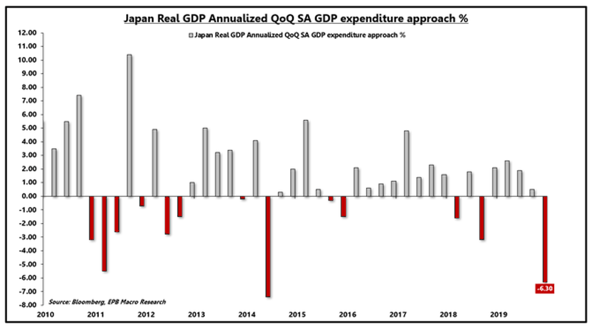 Essentially, the Japanese economy erased all the growth in 2018 and 2019 plus more in the final quarter of last year. The drop was the largest since 2014 in a quarter when the sales tax was also raised. This time around, the slowdown was due to the sales tax increase from last October and a devastating typhoon. Now, the coronavirus that has impaired the Chinese supply chain threatens to knock Japan into a full-blown recession. There are reports that Nissan may have to curb domestic output unless shipments of parts from China resume shortly.

The yen dropped through a weekly trend line that has been in place since the beginning of 2017.

One would think that Japan’s bond market would be shunned, but that wasn’t the case at all. Last week’s 5-year Japan bond auction was 4.4-times oversubscribed, a little higher than the previous month. How can that be? It turns out that USD based investors can earn more on Japanese government bonds. Buyers of JGBs hedge their yen exposure back into USDs thereby earning a yield that is better than US Treasuries.

“[For a yen/dollar FX swap] a dealer receives a total of about 230 basis points for what is a synthetic yen-dollar repo. That includes the three-month dollar Libor rate, the negative rate on Japan Libor, a charge by the dealer called the ‘basis’, and the negative yield on the JGBs which are the best place for the dealer to park the yen they receive in return for dollars. Compare that to dollar repo which was 190 earlier this week, and Treasury bills, which are about 150. This explanation helps to explain what is going on in the US repo market. Banks are choosing to lend dollars in the FX swap market rather than the domestic money market.”  This also helps to explain why foreigners are decreasing their holding of Treasuries.

As you can see from the monthly chart of the AUD, the combination of risk aversion and economic disruption fears due to wildfires and supply chain contagion sent the AUD to new decade-lows.

Friday’s February PMI confirmed these investor fears: even though Australia Manufacturing PMI rose 0.2 to 49.8 in February (up from 49.6) the Services PMI dropped to 48.4, down from 50.6. This caused the Composite PMI to contract to 48.3, down from 50.2. The rate of output reduction was the “steepest seen since data collection began in May 2016”. Panel members linked this to “a combination of subdued client demand, adverse weather and the Covid-19 outbreak". 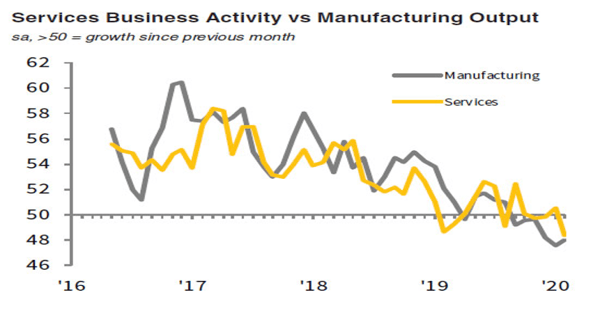 Even though European countries have the least exposure/dependency to China, the euro has managed to fall virtually every day this month except for 3 days. The main culprit in its demise is the fact that European economic data is soft to begin with and its export trade is most-vulnerable to a slowdown in global growth due to the COVID-19 outbreak. Another factor is that the euro, with its negative interest rates, is used as a carry trade currency. Companies and hedge funds can borrow from European banks at very low rates, sell the euros to buy USDs and fund their business needs and risk trades, respectively.

With the euro and yen representing the two highest weightings (57.6% and 13.6%) in the US dollar index, its no surprise that the trade weighted index is up big in February. 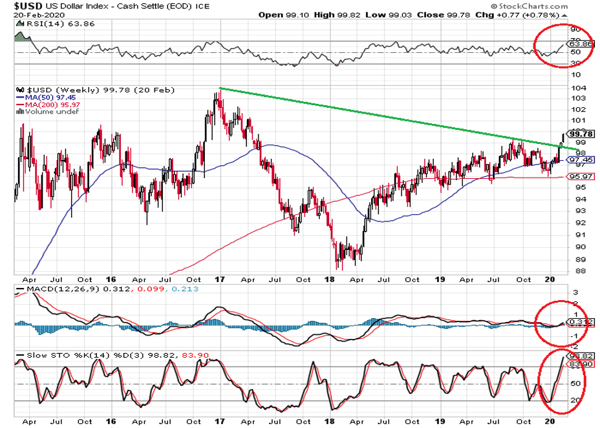 On the weekly chart, the index has broken above resistance and its momentum indicators are showing that the index has room to run higher. Having said that, on the daily chart (shown below), the index’s gains came to a screeching halt after Friday’s US IHS Markit purchasing managers' index fell 3.7 points to 49.6. The index measures composite output at factories and service providers.  Based on this news, the index may enter a consolidative phase. Keep in mind that the USD is also vulnerable to tweets from President Trump, who likes to blame USD strength and the Fed for hampering the US economy from greater growth. President Trump likes to equate his success with the US equity market, which keeps pushing higher despite the possible supply chain contagion from the COVID-19 outbreak on companies within the equity index. Nevertheless, investors keep bidding stocks higher because they know that if stocks fall, the Fed has a vaccine in the form of liquidity injections.