We have long found it gratifying to see economists and market pundits proven incorrect in pessimistic forecasts. Not just wrong, but completely wrong.  Last Friday’s employment statistics on both sides of the border was one of those all-too-rare occasions. While most readers will have heard the broad results, it’s worthwhile taking a closer look.

Let’s begin with the United States, as that is where the biggest surprise occurred. The upset actually commenced last Wednesday with the release of the monthly ADP Employment Change report for May. Economists had called for a decline of -9.0 mln jobs in May, well down from April’s -20.236 mln jobs lost. As it turned out, the index showed just -2.760 mln jobs lost. Still a loss, but the trend (or, as it is termed these days, the first derivative) appears to be changing for the better. Most pundits, wedded to their views of a disastrous second quarter, largely dismissed the results, setting up the shocker report of Friday morning.

Another metric we have always favored, the weekly jobless claims report, has improved in recent weeks as well. Street consensus was for a rise of +1.830 mln in new claims. The actual number was slightly higher at +1.877 mln but, as the chart below demonstrates, this trend is declining. 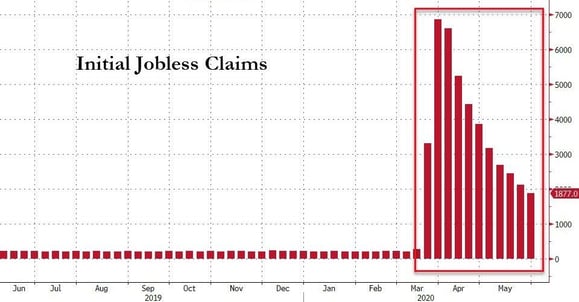 This is not to make light of the serious numbers of jobs destroyed by the ongoing Covid-19 pandemic, quite the contrary in fact. A lot of jobs have been lost over the past several weeks and many may never return. But a large number will.

Which brings us back to last Friday’s stunning May employment report and its implications for the near-term outlook for the US, and global, economy.  Market consensus was for a decline of -7.5 mln jobs and the unemployment rate rising to 19.7%. The previous report for April showed -20.700 mln and 14.7% respectively. What emerged at 8:30 am was an increase of +2.5 mln jobs and the jobless rate declining to 13.3%.  The tweeter-in-chief summed it up succinctly:

Market observers got these numbers not just wrong, but very wrong, erring not only in the magnitude but, more importantly, in the direction. It is important to note that Bureau of Labour Statistics, the creators of the report, included a footnote which indicated the numbers were incorrect by as much as 3% due to a “misclassification error” which categorized those on furlough due to COVID-19 as employed. Even still, that 3% change would put these numbers in more favourable territory than forecasted.

Regardless, many analysts are still committed to an extremely bearish view of the economy, preferring to remark, as economist Dr. Avery Shenfeld did, “the cup is now one-quarter full". 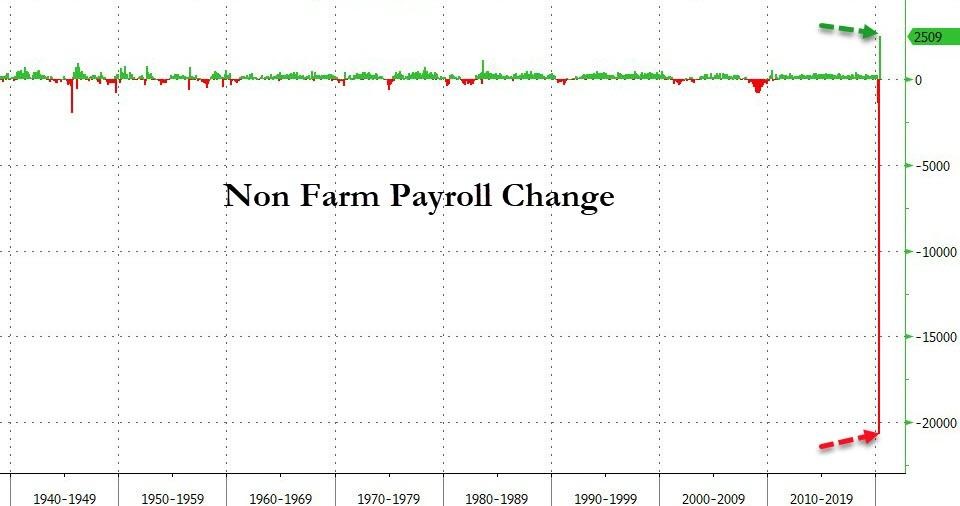 Whether or not these excellent job-creation numbers will continue is anyone’s guess, but Mr. Market responded by buying US equities with enthusiasm. Other players sold the greenback, in search of better returns overseas as the rest of the global economy gets back into gear. Risk on as they say

In the True North, a similar jobs report took players (including this writer) by surprise. But let’s begin with the Bank of Canada’s rate announcement last Wednesday – the first by incoming Governor Tiff Macklem – and the Bank’s surprisingly upbeat view on the Canadian and global economy.

As expected, the Bank held the overnight rate steady at 0.25%. 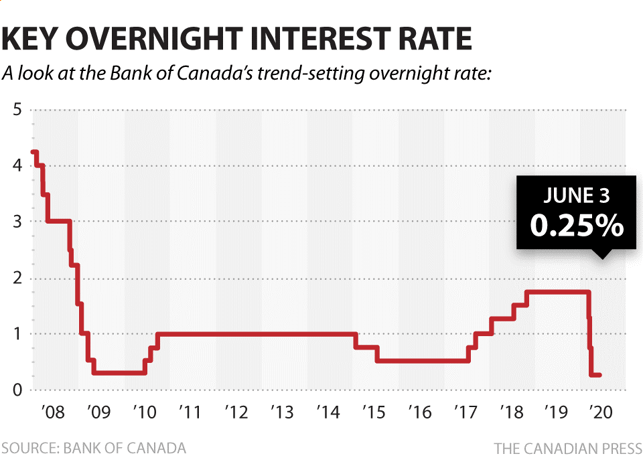 The BOC believes the worst of the COVID-19 pandemic is over, and that the Canadian economy has managed to avoid the worst-case scenario outlined by the Bank at the outset of the health crisis. In April, the Bank foresaw a decline of -15.0% to -30.0% from Q4 2019; a decline of -10.0% to -20.0% is now projected. To a degree, this vindicates the optimistic remarks recently made by outgoing BOC Governor Stephen Poloz (Are We There Yet? -May 25).

Yet it was left to the Canadian May jobless numbers on Friday (released coincident with US jobs numbers) to provide tangible evidence for the Bank’s cautiously optimistic view. Market consensus was for a decline of -500K jobs vs April’s -1.994.0 mln and the unemployment rate rising to 15.0% from the previous 13.0%. The release on Friday led to initial disbelief among market players, as +289.6K jobs were created and the rate “only” rose to 13.7%. A total of +219.4K full-time jobs were added. Job growth was concentrated in the province of Quebec, where roughly 80% of the total occurred, largely due to a recall of factory workers who had been furloughed early on. Ontario, by contrast, saw no new jobs at all.

The CAD has been rallying for quite some time now, but it does look a little stretched so a correction may be imminent. After these excellent numbers it just held steady against the greenback.

The EURO took off against the USD following the announcement of a near-doubling in size of the European Central Bank’s current quantitative-easing programme. Analysts had been calling for an increase of at least +500.0 bln EUR in bond-buying by the ECB; the ECB surprised players with a +600.0 bln EUR increase to a total of 1.350.0 tln EUR and extended the programme to June 2021. The EUR gapped higher against the greenback on this announcement: 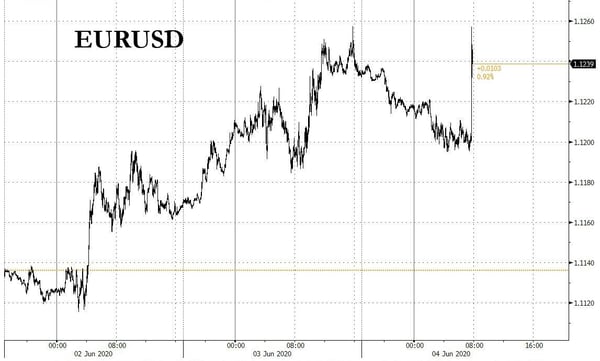 Elsewhere further evidence of a reviving global economy continued to accrue.  China’s vast manufacturing sector continued its recovery, posting its third-straight monthly PMI above the all-important 50.0 level. May PMI had been forecast at 51.0 vs April’s 50.8 – the index held steady at 50.8, unchanged. 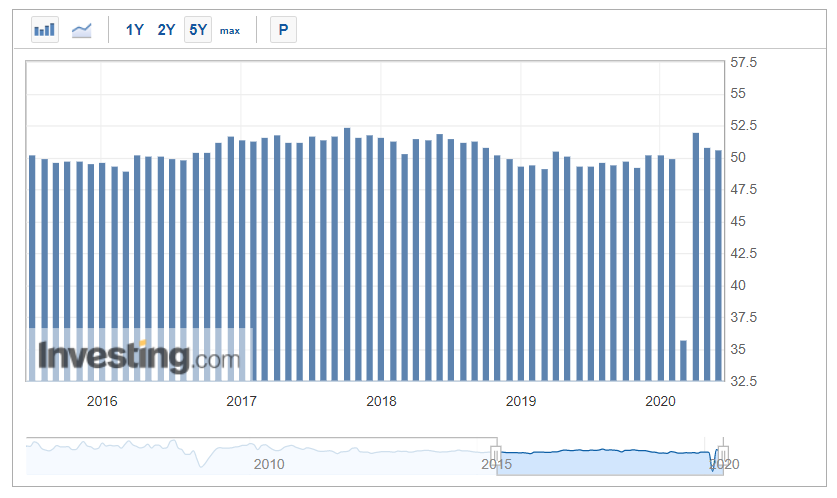 It really isn’t that gloomy out there, despite what pessimistic economists and analysts say. Consider these little nuggets.

The coming week is relatively light, with wholesale and retail inflation numbers being released stateside and little of note in Canada. The Fed rate announcement on Wednesday afternoon – no change anticipated - will be of interest.