The Economics of Fear

After falling from mid-May to the end of August, the USD index strengthened against most of the major currencies in September. However, over the last week the USD has reversed course and turned lower. Technical analysis on the daily chart of the index suggests that the upside correction may also have been completed. The 5-day moving average looks like it will cross below the 20-day moving average in the week ahead.

The momentum indicators are also warning that a turn lower in the index is in hand. The slow stochastic turned lower at the beginning of last week while the MACD readies to cross lower. A break below the support line around 93.50 could see a move to 92.80. As you can see from the chart, a move below there would suggest that a temporary top is in place. 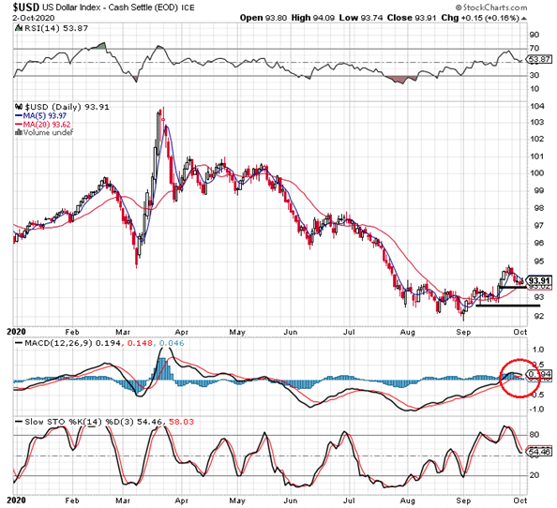 What has caused this move? The answer is two-fold: a slowing recovery and the rise in second wave Covid cases. At first glance, it looks like the economic momentum that began at the end of Q2 has stalled. The inability of the White House and US Congress to agree on new government support for ailing businesses and the unemployed may have curbed the pandemic recovery. Last week’s employment data seems to reflect this point.

A total of 837K Americans filed an initial claim for jobless benefits, and another 650K applied for the Pandemic Unemployment Assistance program. Six months after the pandemic struck and around four months since the economy began recovering, the number of people filing for unemployment benefits is four-times what it was pre-crisis. Friday’s employment data show that the economy added fewer jobs than expected in September, 661K versus the forecast of 800K. This was the smallest increase since the economy reopened and pointed to deceleration in the recovery. 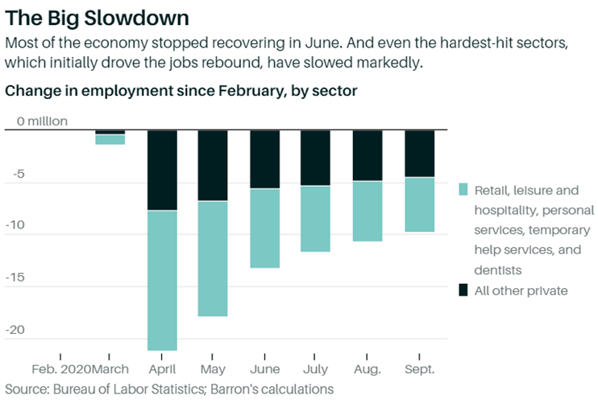 The steady rise in second wave Covid case is causing a reintroduction of consumer and business restrictions in some regions. Even without added restrictions, the emergence of the wave 2 is playing into the economics of fear.

A couple of weeks ago, I wrote about the demographics and the baby boomers. There are about 150 million baby boomers in North America and Europe, and they are the generation with the greatest wealth. They are also the generation most at risk from Covid, so it’s not hard to see why consumer spending is not going to increase. This cohort is not going to go to restaurants, bar, shopping malls, and movie theatres during the wave 2 of the pandemic.

As you can see from the chart above, Sweden (which decided to go with herd immunity and no economic restrictions) had a negative growth rate. This goes to show how the economics of fear curtails economic activity, even in a country that had no mask wearing and social distance mandates or social gathering restrictions.

By the way: the Atlanta GDP now forecast for US Q3 is presently over 32%, but The Conference Board Economic Forecast are looking for Q4 to slow considerably to about 1.3%, as high levels of unemployment damage spending later in the year.

Meanwhile, sterling seems to be on better footing lately. This is rather surprising since the Bank of England has kept the option of negative interest rates card on the table. Could it be the price action is sniffing out a possible Brexit compromise? The 5-day moving average has crossed up through the 20-day moving average and the MACD has turned up from the overextended zone.

News on Friday that President Trump and the First Lady tested positive for Covid-19 sent stocks sharply lower, however the fact that stocks recovered by the end of the day may be signaling that the recent correction in equities may have run its course. Technical analysis on the daily chart of the S&P suggests that this may be the case.

The 5-day moving average has crossed above the 20-day moving average while the MACD has turned up from the overextended zone. If this is true, we may be in for a bout of risk-on sentiment, at least until the election. This should cause the USD to fall and for the other major currencies to rally along with equities. 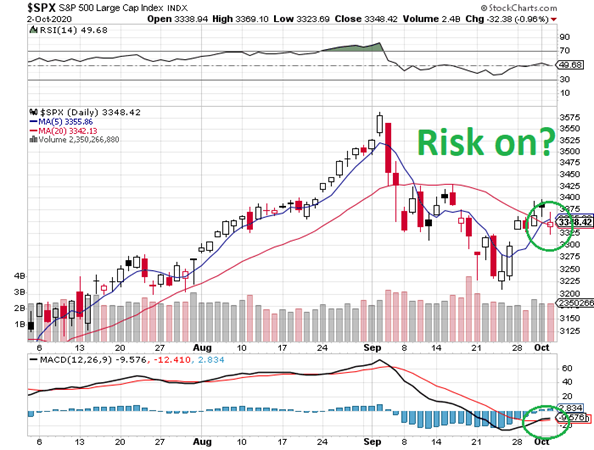 In the week ahead, the economic calendar is light, however there are many monetary policymakers from the Fed, ECB, and BOJ due to speak. Canada’s employment data will be released on Friday, where an increase of 120K is expected. This would mean that it would have regained nearly 2/3 of the jobs lost in the pandemic compared with about 1/2 in the US.

Also, on tap is the central bank of Australia with its policy decision. Last week, Australian retail sales for August dropped by 4% on top of two consecutive months of retail growth (2.7% in June and 3.2%in July). Thus, all eyes will be on the central bank’s policy statement for hints about more QE and stimulus for the November meeting.