There is a widely quoted Chinese saying: “may you live in interesting times”. Such are the times in which we now find ourselves. Consequently, fundamental analysis of corporations and the economy in general are largely pointless at present. Given the extreme uncertainty in the economy, many companies are cancelling their forward guidance– and who can blame them?  National governments appear out of policy options after both they and global central banks fired so many “bazookas” in recent weeks. Regardless, let’s take a closer look.

US weekly jobless claims has long been one of our favourite metrics of the American labour market. Timely and straightforward, we prefer it to the more widely publicised monthly employment report. This chart, from late last week, scarcely needs any explanation. 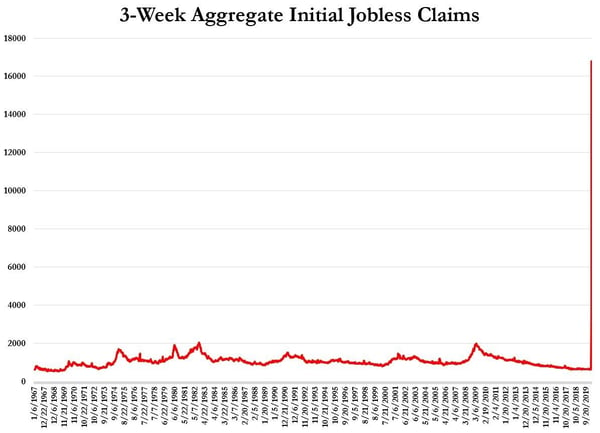 During the past three reporting weeks, almost 16.80 million Americans have been thrown out of work. In Canada, the most recent employment report saw a loss of just over 1.0 million jobs, and the jobless rate ticked up to 7.8% - the highest is several years. 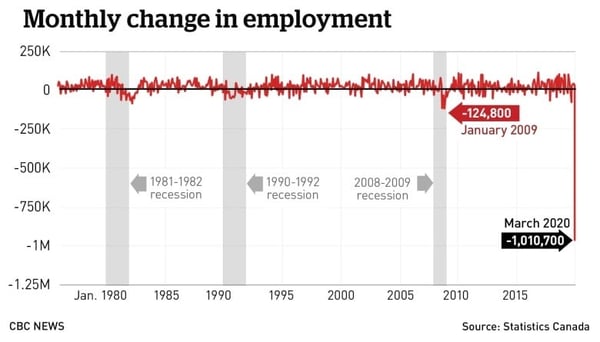 A lot of people losing their jobs and all that demand exiting the economy: that can’t be a good thing, right? It depends.

This should be just a temporary shutdown of the economy and not a structural adjustment, which would see many of those jobs vanish for good (the western oil patch could certainly attest to that). Bear in mind that nearly 70% of the North American economy, and elsewhere in advanced nations, exists to satisfy consumer demand. In other words, what people need, want, and ultimately desire (not always the same thing) creates all the jobs, growth, and income that makes up the economy. That demand has been throttled for the time being. It hasn’t disappeared, though (it never does ), and when the Covid-19 virus finally runs its course, that demand should re-assert itself with a vengeance.

Equity markets traded up strongly last week on just such optimism, with Wall Street gaining 12% and Bay Street right behind. Stocks had been pounded mercilessly from early March onwards as investors sold everything in panicked reaction to the coronavirus. Now the attitude seems to be that all the bad news about COVID-19 has been priced in, that if things worsen governments will simply spend more, and that the curve appears to be flattening out.

Over the weekend, British PM Boris Johnson was released from the ICU, not yet fully recovered but doing better after being admitted last week with severe symptoms of COVID-19, which warrants a degree of optimism.

Everything, of course, is messed up – governments are spending absurd amounts of borrowed money, demand has been flattened, people are cooped up and suffering from cabin fever – but this will abate. When the all clear is given, things may pick up with surprising gusto.

With its announcement that the Federal Reserve will now purchase high-yield bonds and ETFs (Exchange-Traded Funds) as part of its bond-buying programme to stabilise the US economy, the Fed has now joined the European Central Bank (ECB) and Bank of Japan (BOJ), both of whom have engaged in variants of this policy for many years (BOJ being the first). This latter bank holds 65% of all Japan-issued ETFs, as well as half of the JGBs (Japan Government Bond) currently outstanding.

High-yield bonds are known colloquially as ‘junk’ bonds, although high yield (HY) traders dislike the term. Essentially, any bond losing a Triple B (BBB) rating is classed as junk, rather high yield. Pension funds, insurance companies, and other similar institutions are generally prohibited from investing in such ‘non-investment grade’ bonds. An interesting coincidence lies in the fact that Q1 2020 saw a record number of bond downgrades to junk, at right around the same time the Fed announced its intention to start purchasing junk bonds. 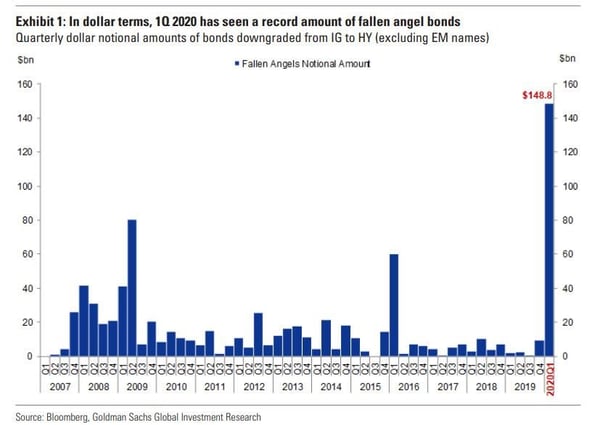 From a feared global energy cartel in the 1970s to a long-running soap opera nowadays, the fall of once-mighty OPEC has been a sight to behold.

Yesterday a deal was finally struck to cut around 9.7 mil bbl/day from global production after Mexico signed on to the agreement. (Talks had been held up for four days while Mexico’s populist government sought a better deal from its cartel partners.) Total global production is currently around 95.0 mil bbl/day and analysts had been calling for a cut of almost 35.0 mil – over one-third – to restore balance to the crude market. We doubt that will happen any time soon. Current global economic doldrums with demand destruction caused by official reaction to COVID-19, continued strong crude production and growing lack of storage space all were negative factors weighing heavily on participants. However, it remains to be seen whether this new quota accord will hold. The history of such agreements is not encouraging.

The Bank of Canada will be making a rate announcement this coming Wednesday. We anticipate no change in rates from the current 0.25% but the accompanying statement will be worth a look. In the US, there will be a full slate of secondary economic statistics, all rendered academic for the time being until they, and the rest of the world, gets back to work.