Last week was dominated by, as is usual these days, central bank activity and, to a lesser extent, real readings on real economies. Let’s examine what our betters had to say and dive into some real-life numbers as well.

First up was the Federal Reserve rate fixing last Wednesday. To almost no one’s surprise, the Fed left the overnight rate unchanged at 1.75 – 2.00%. The accompanying statement, however, in the language of our esteemed colleagues Dr. Long and Mr. Short, ‘tilted notably hawkish’. For example, the Fed described growth as ‘rising at a strong rate’, an uptick from the prior adjective of ‘solid’. The overall increase in employment has been ‘strong’; household spending and business capital spending have ‘grown strongly’, the former an uptick from ‘picked up’; more rate hikes, on a gradual basis are expected; and the FOMC vote was unanimous. The guys in the Chicago pits reacted by bidding up September funds futures: 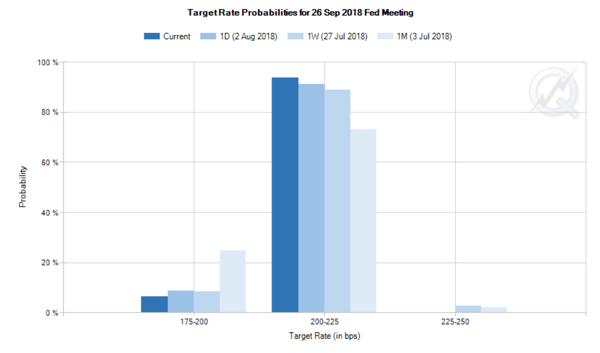 In the real world, US July jobless numbers released last Friday, while disappointing at first glance, were actually pretty good.  While the headline number was soft  (+157K jobs created vs call of +193K), the two-month revision was a strong (there’s that word again) +59K. The rate held steady at 3.9% as expected, while wages rose +0.3% as expected and well above the previous +0.1%. The latter could indicate that, finally, hourly wages may be catching up with both economic growth and job growth.  Mr. Market liked the numbers and bought the greenback.

In the True North, the loonie rallied on surprisingly good May GDP numbers.  Growth yr/yr clocked in at a strong +2.6%, beating the call of +2.3% and helping CAD gain ground lost after the shocking exclusion of Canadian attendance at the ongoing USA/Mexico NAFTA talks. That issue has become, not surprisingly, tied up in domestic politics and beyond the scope of this newsletter.  We will point out, though, that PM Justin Trudeau rebuffed earlier American attempts at a bilateral accord with Canada, saying he stood ‘in solidarity’ with Mexico in seeking a trilateral accord. That Mexico is now seeking a separate deal with America will be a bitter lesson in global politics for the young Canadian PM.

In Cool Britannia, the Bank of England raised rates, as was widely expected, to the highest level since 2009 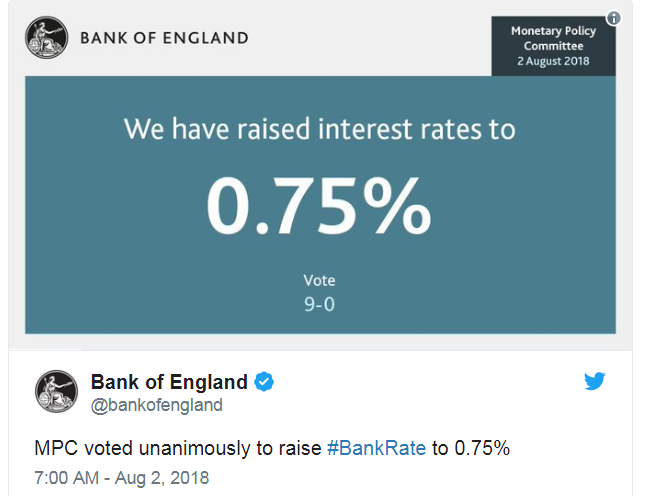 What was surprising was the unanimity of the vote, all members voting to hike and giving a hawkish tone to the announcement.  From the statement:

‘The MPC continues to judge that the UK economy currently has a very limited degree of slack. Unemployment is low and is projected to fall a little further. In the MPC’s central projection, therefore, a small margin of excess demand emerges by late 2019 and builds thereafter, feeding through into higher growth in domestic costs than has been seen over recent years.’

We can sum that up in one word: Strong.

In the Far East, the Bank of Japan continued its opaque management of the JPY and domestic bond market by tweaking, not changing, its 0.00% yield target for the Japanese Government (JGB) 10-year bond yield.  Previously the bank allowed a ten basis point trading range either side of the target (-0.10% to 0.10%); that has now been widened to twenty basis points either side of the target yield. Such intervention will allow a little more volatility in bond yields but only a bit and had minimal effect on the JPY.

Bond yields are always an issue. To catch up with the fixed-income market, we spoke with our friend the bond salesman He told us that bond traders are still a skittish lot so that much hasn’t changed, but there have been some interesting developments. Case in point: The 10-year US treasury – the world’s benchmark bond – has been stuck in recent times just shy of the 3.00% yield level.


The above graph shows strong resistance at the 3.00% level over the past two months. Why is that? The salesman explained to us that current American bond yields are far above other sovereign yields. For example, German 10-year bonds trade at 0.41%, French at 0.74%, Italian at 2.93%, Canada at 2.34%, Japan at 0.09% and Swiss at -0.10%. From the viewpoint of an international investor, the US 10-year bond with its ultra-competitive yield and deep liquidity is a no-brainer, so much of the demand is from overseas players. This demand not only keeps the 10-year treasury at 3.00%, but also supports the USD. In fact, since the end of May, the USDX has essentially flatlined (EU Trade Truce July 30/18), in part due to demand for USD from foreign traders seeking to lock in higher US yields. Complicating all this, the salesman added, is the fact that, while the Fed has embraced Quantitative Tightening (QT) in an attempt to normalise rates, other central banks have either put off QT for a while (ECB), or are still buying bonds (BOE and BOJ) in a continuing Quantitative Easing (QE) programme. Until all central banks are synchronised, he concluded, longer-term bond yields will likely stay low.

The lazy days of summer are upon us, so the coming week sees a sprinkling of secondary US statistics, Canadian jobless numbers and little else. Summer beckons!