No, we aren’t referring to the greenback or the US economy, although we will discuss both at greater length below.  We are, in fact, referring to the loonie and its recent strong rally.  Despite being the winner on the week, factors are at play which may make further gains in CAD difficult.  Let’s take a closer look.

Last week saw a dearth of Canadian numbers until jobless statistics and the trade balance were released this past Friday.  Once again, the Canadian economy generated an enormous number of jobs in December: total jobs created clocked in at +78.6K, with a breakdown of +23.7K full-time and +54.9 part-time and the unemployment rate falling to 5.7% from 5.9% in the last report.  Great results at first glance, right?  However, the large number of part-time jobs represents seasonal hiring which ended December 24th, and the outlook for further part-time hiring is murky, especially in the sprawling province of Ontario, the linchpin of Canada’s economy.  The government there has raised the minimum wage, effective January 1st, 2018, to $14/hour from the previous $11.60/hour, an increase of almost 21%, with a further hike to $15/hour scheduled for January 1st, 2019.  Economists have debated the pros and cons of such increases for years; now there will be actual evidence of whether or not it works.  The Bank of Canada published a recent report saying that such a hike would result in a net loss of 60K jobs, which is debatable, but it is reasonable to assume that employers will likely think twice before hiring those individuals of little apparent promise.  On that basis, with such a major increase in labour costs, it’s hard to foresee continued major job gains going forward.

Additionally, Canada’s November trade balance widened out unexpectedly to -2.5bln from the previous -1.5bln.  Analysts had called for a deficit of -1.7bln, so this worrisome trend indicates a strong CAD is hurting the export sector, the same sector flagged by the Bank last summer as being of concern.  Only recently did the Bank say the sector was performing reasonably well – that assessment may be changing.

Regardless, Mr. Market liked the numbers and took the loonie much higher, making CAD, as mentioned before, the winner on the week.

In the land of the free, jobless numbers painted a confusing picture of the US economy.  ADP numbers released earlier in the week augured well for the US employment statistics released last Friday, showing an increase of +250K jobs while analysts predicted just +190K. In the event, both were mistaken on the upside, as the economy generated just +148K jobs with the jobless rate at 4.1%.  Analysts had called for +185K jobs and the rate dropping to 4.0%.  Net revisions of the previous two months were -9K jobs which, in an economy of almost 160KK workers, is infinitesimal.  With that all said, however, the reality is that the US may be poised on the edge of a capital spending boom, the likes of which hasn’t been seen in many years.  The following headline sums this all up very neatly:

The upshot of the article is that, while the Obama administration regulated with abandon and with scant regard for business profitability or competitiveness, the Trump administration is 180 degrees removed from this attitude.  Coupled with recent tax reform (which still requires some further work), American business leaders feel considerably more confident in the future and are increasingly willing to make the large capital investments on US soil which will create large numbers of jobs for American workers.  So December’s sluggish jobs numbers may just be an aberration in a trend toward greater job creation in the future.

What’s up with commodities?  As our colleague recently pointed out (‘Soft Dollar’ January 2/18), commodity price inflation may be the story of 2018.  As commodities are universally priced in USD, the general rule is that a weaker USD implies higher commodity prices and vice versa.  Players have taken into account record readings on manufacturing in Europe while it appears Chinese factories, in response to rising global demand, may be increasing output as well.  The angle is that an improving global economy, finally synchronized across all regions, will heighten demand for raw materials.  While most investors are familiar with oil and gold, the whole sector is strong: 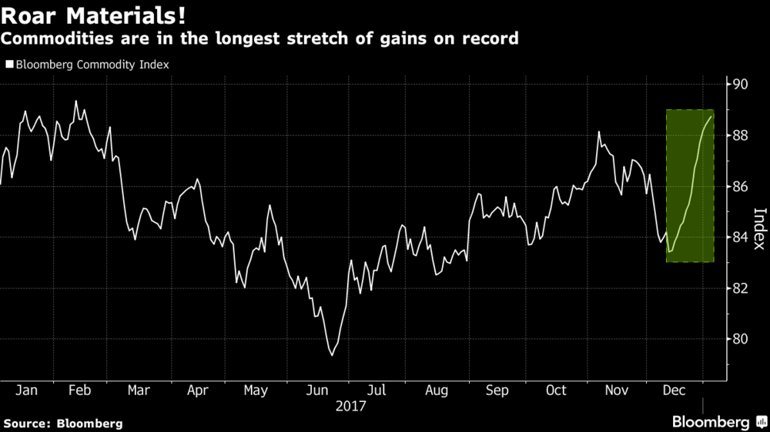 Strength over the past six months is even more spectacular: 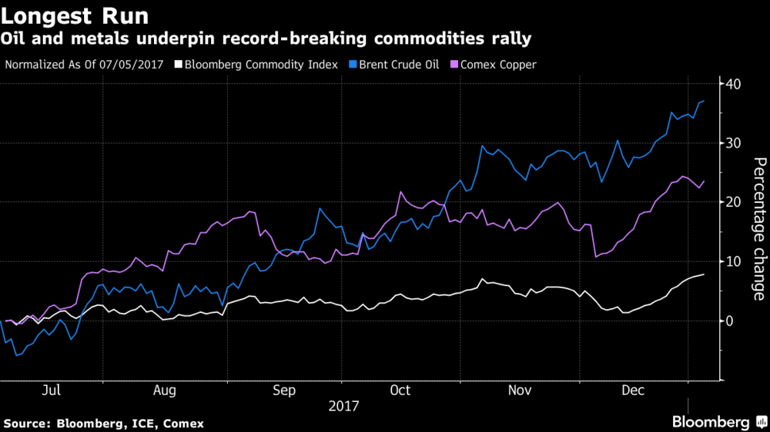 While this strength in commodity prices should be a negative for the greenback, it should prove a positive for the loonie, complicating efforts by the Bank of Canada to normalize rates.

All this talk of rising commodity prices, booming capital spending and a growing global economy encouraged equity investors, with the DJIA, NASDAQ and S&P 500 setting new record highs late last week, the Dow notably closing above 25,000 for the first time last Thursday.  (The Dow closed at 18,589.68 +256.95 the day after the election of Donald Trump)

In the post-holiday shortened week, there was nothing of note outside North America.  However, while this week sees little in the way of Canadian economic releases, the US calendar is loaded with key numbers in the latter half of the week and numerous Fed speakers holding forth on the economy.